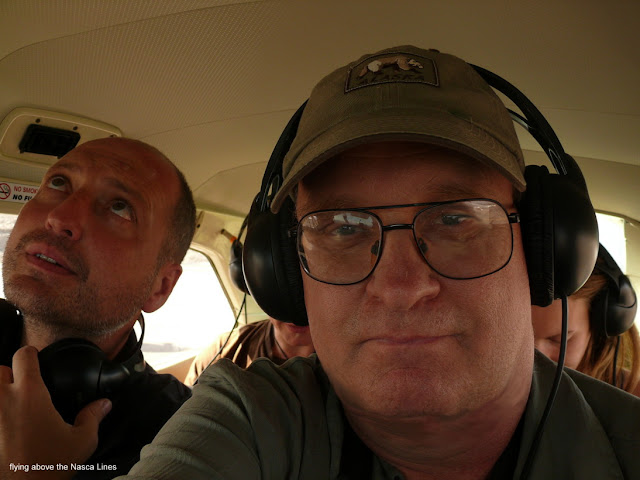 It's cold here nowadays. When it gets cold, my mind immediately turns toward warmer climes. About three years ago, I went to Peru to escape the relentless cold. I know that I did a previous blog post about the mysterious, pre-colombian lines in southern Peru. It is an interesting enough subject, that it deserves a second look.
In the photo above, I shot this self portrait as a group of tourists and myself boarded a Cessna at the small airport near the town of Nasca. The guy next to me was a police officer from Wales. It was his first trip in a small plane. 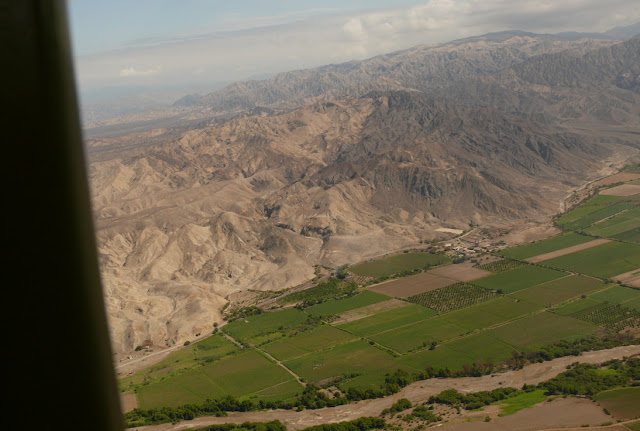 The instant that any tourist enters the town of Nasca, they are approached by a tout offering tickets to fly over the Nasca Lines. The price seems to be set. I paid about $70.oo US.
The plane rose steeply out of the green, Nasca Valley. The desert is watered by runoff from rain and snow, high in the Andes Mountains to the east. These valleys that are connected to the distant Andes have been cultivated since long before the rise of the Inca civilization. 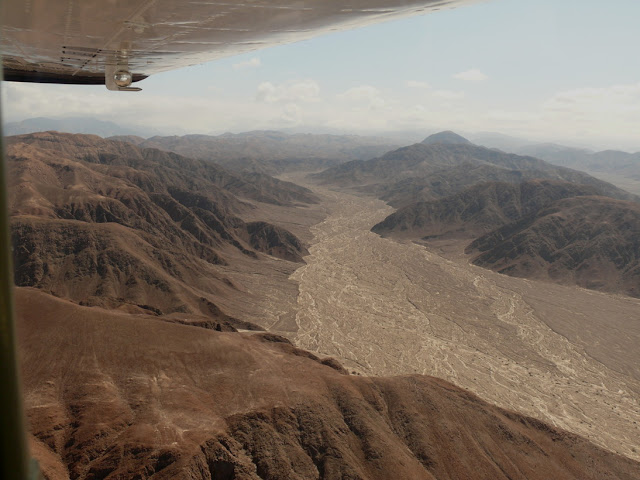 The valleys that are not connected to the Andes are bone dry. So dry that there is no vegetation in most places. The area recieves about one eighth an inch of precipitation a year. That's about half a centimeter. It comes down mostly in the form of a light mist. 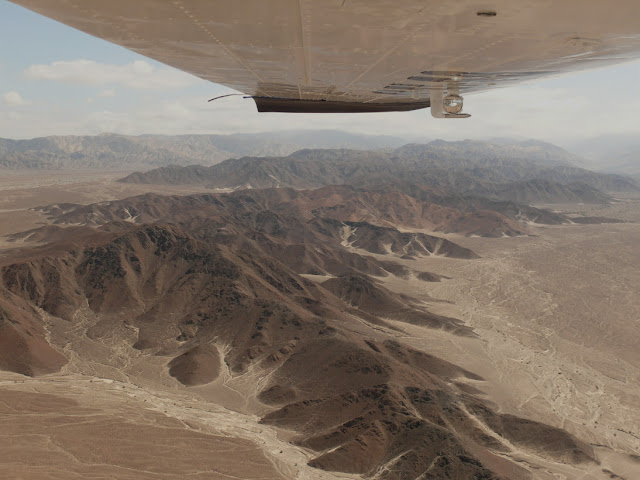 The desert is so stark, that it's almost scary. Even though I was there at the hieght of their Summer, it was not nearly as hot as Phoenix, Arizona in the Summer. It is certainly beautiful. 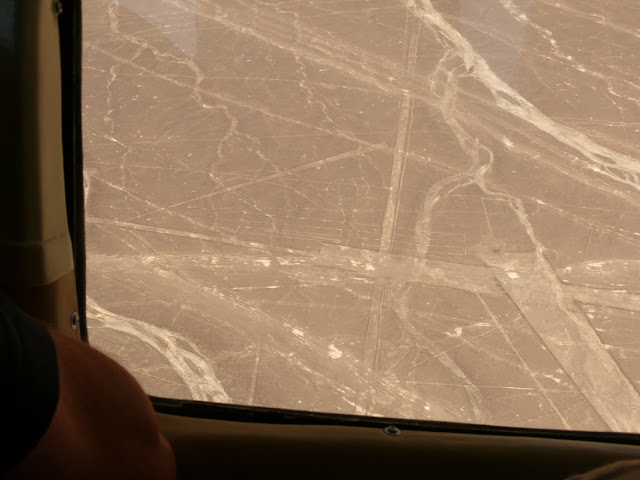 Most of the Nasca Lines looked like this. The plane would tilt at 90 degrees, first left, then right, so that everyone could get a good look. The poor Brazilian sitting next to the pilot got violently airsick. He filled up three barf bags, his own, and the Welsh cop's, and mine. 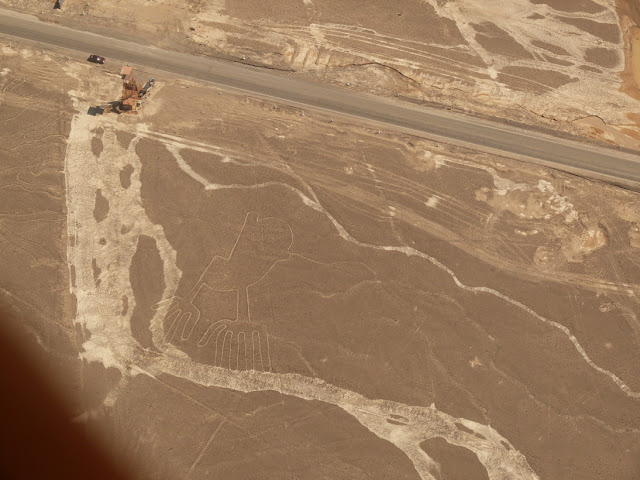 The photo above, shows a figure with large bird feet. No one is certain of the purpose of these lines. They were laid down by successive generations of pre-inca peoples. Colonists knew nothing about their existence until someone flew over them in the 1920's. They must have had some ceremonial significance.
In the upper left of the photo, there is an observation tower next to the car, for people who dont want to fly to see the lines. I wonder if the erosion evident in the photo, preceded the tower, or is a result of it's construction? 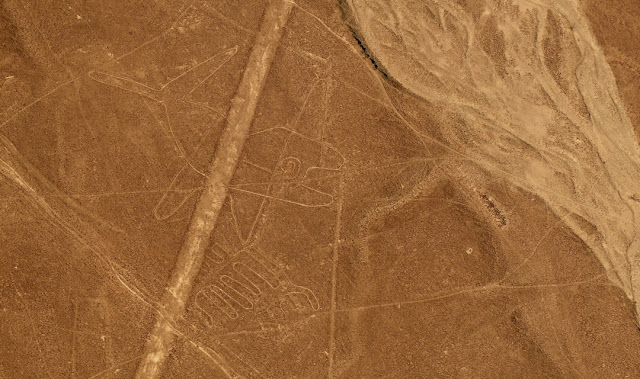 A whale and an abstract design. The straight lines were made by pre-colombians after the figures were laid down. They were made by scraping off the top layer of soil, and pushing it to the side. 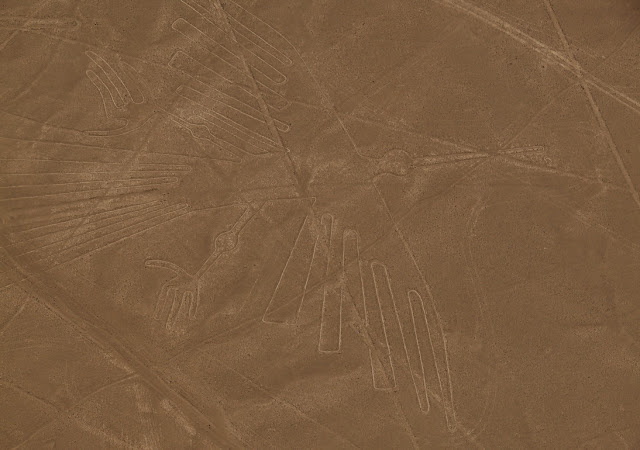 The Thunderbird. Of course these figures were named in modern times, not by their creators. 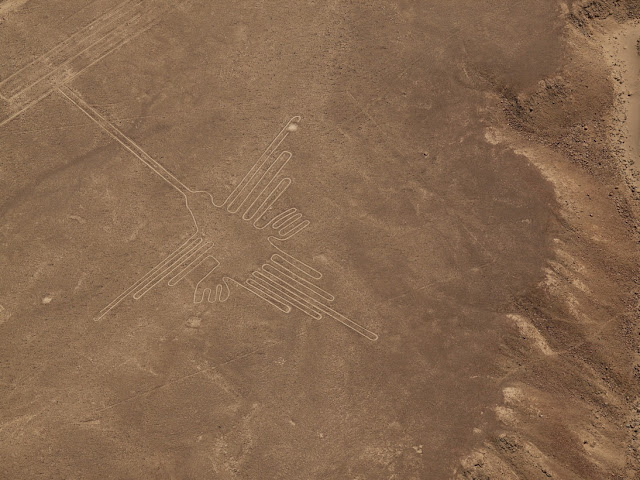 The Hummingbird. The real genius of these vanished peoples, was not the figures, it was their sophisticated irrigation systems. They even constructed irrigation canals that were covered to prevent evaporation. Some of them ran, and continue to run, for miles under the desert floor. Modern farmers still utilize them. 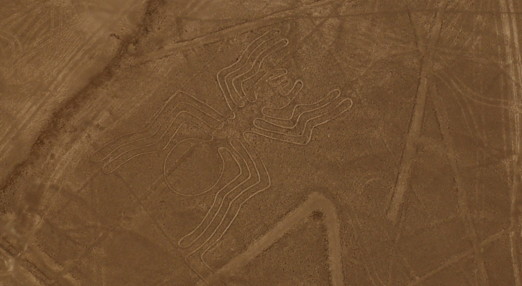 The spider was my favorite of the bunch. These people even constructed spiral wells, so that they could access the water as it gradually dropped lower. 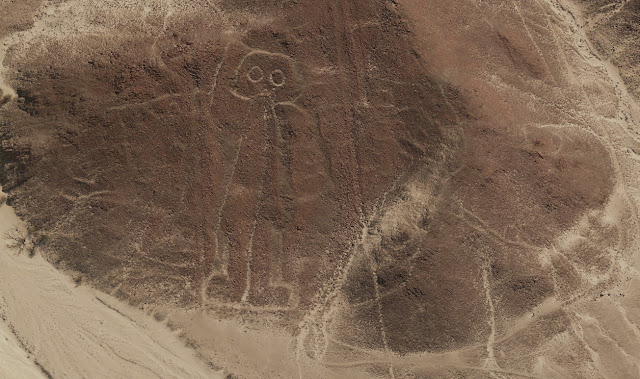 The big attention getter is called the Astronaut. In more naive times, people speculated that it was inspired by space travellers. I imagine the guy is saying, "hi mom". It is about 200 yards, (meters) tall. I think these people were trying to get the positive attention of the gods in the heavens. There are eroded pyramids scattered throughout the desert as well. 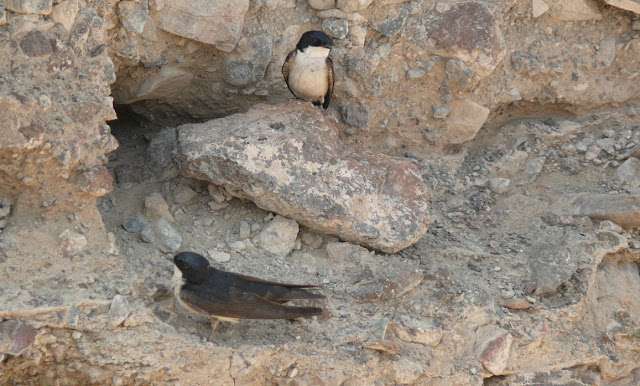 There was this pair of Blue and White Swallows nesting in an embankment at the airport.
Posted by john at 8:12 PM

More amazing photos John! This is one of the reasons I so enjoy visiting your blog - must have been an incredible experience seeing the lines and images from above - thanks for posting!!

John These pictures are amazing what a great experience it must have been to fly over and see them. Thanks for sharing them. I also loved your post about the evolution of your painting of the Hooded Merganser. Great post as always.
Steve