Most of the birds in the photo above are Common Murres. They live up to their name of Common, they can often be seen in great numbers.

These birds are widespread in the Northern Hemisphere. They are somewhat reluctant to fly, and look, and act a lot like penguins. 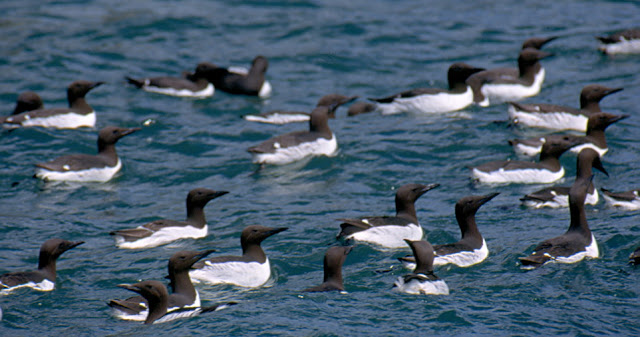 Their abundance is in direct proportion to the abundance of small, schooling fish that occur in northern waters. ( I may have posted some of these photos some time ago.) 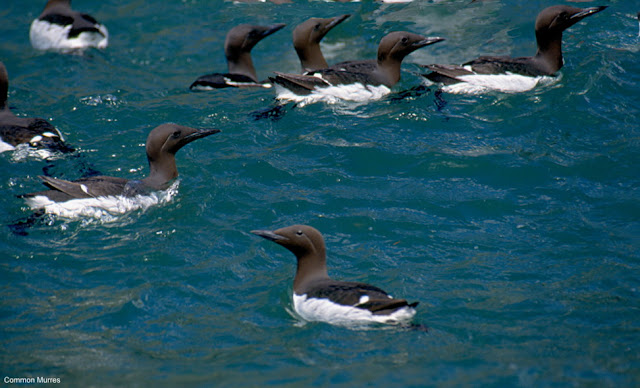 Along with these Common Murres on the Kenai Peninsula, there are also lesser numbers of similar, Thick-billed Murres. 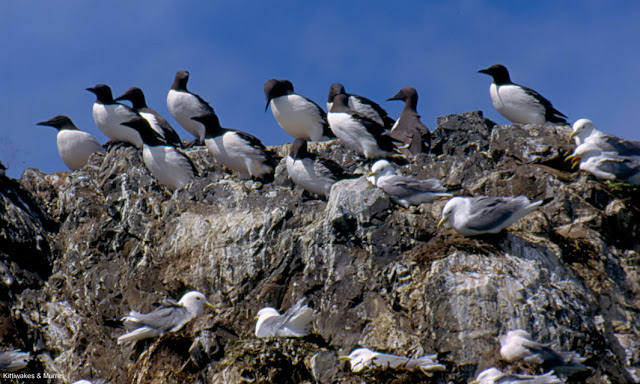 Common Murres nest on steep cliffs along with, Black-legged Kittiwakes. Tufted, and Horned Puffins are common nesters on sea cliffs as well. 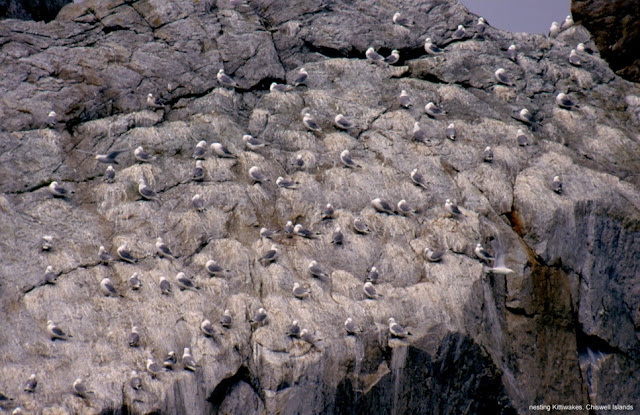 Black-legged Kittiwakes are obviously a species of gull. If anything, they are even more abundant than Common Murres. 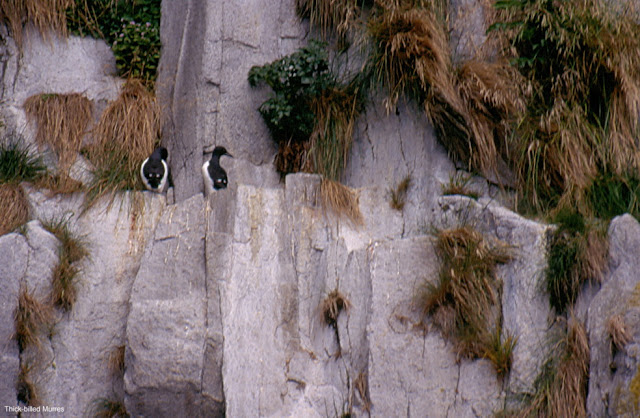 The Chiswell Islands are part of Kenai Fjords National Park. They are a sanctuary for nesting seabirds, like these Thick-billed Murres.

There are a number of different species of sea ducks that can be seen along the coasts of the Kenai. These are Harlequin Ducks in the photo above. Long-tailed Ducks, Common, Red-breasted, and Hooded Mergansers,  Black, Surf, and White-winged Scoters, and Common Eiders also occur there. The other eider species can be seen occasionally as well. 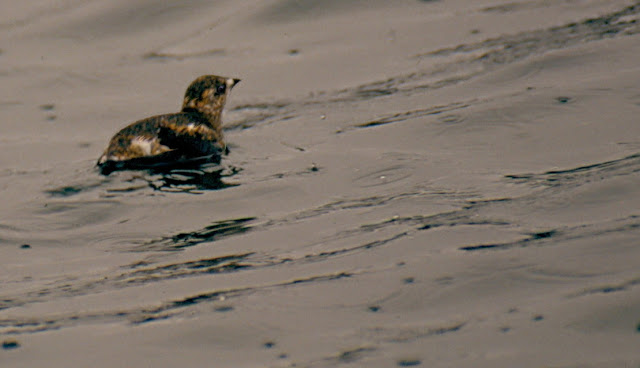 The uncommon Kittlit'z Murrelet is a small, obscure alcid that is pretty much endemic to Alaska during the breeding season. They nest amoung rocks, sometimes far from the ocean. Marbled Murrelets, and sometimes Ancient Murrelets also occur on the peninsula.
There are also several species of auklets on the Kenai.  Rhinocerous, and Parakeet Auklets are the most commonly found. 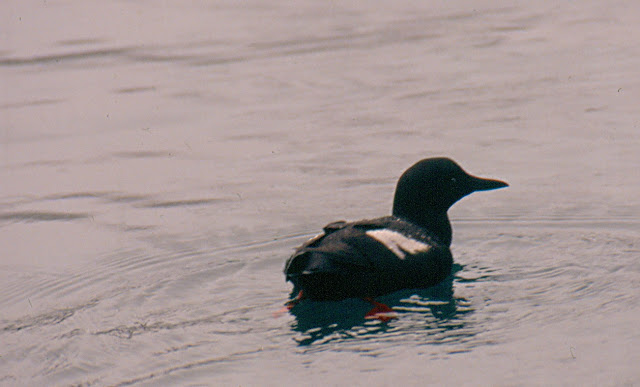 Another common seabird, the Pigeon Guillemot is widespread along the west coast of North America. It has bright red feet. It nests close to shore, under boulders and driftwood. 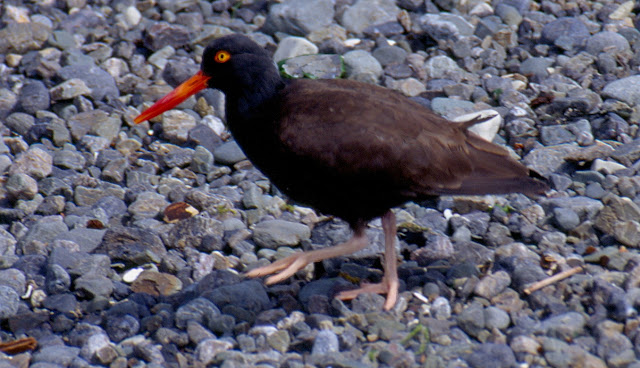 Black Oystercatchers are an odd shorebird of the west coast. There are several closely related, dark oystercatchers in other parts of the world. 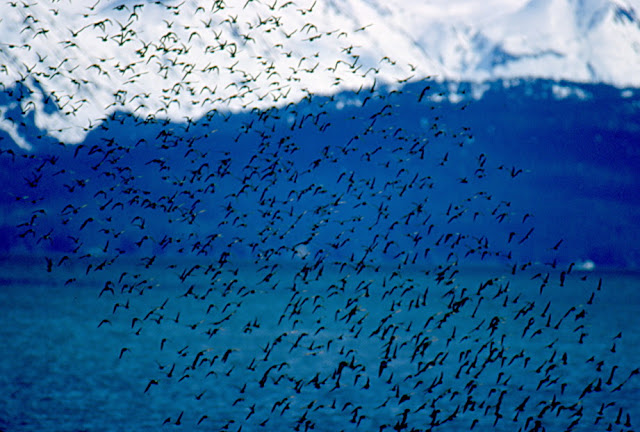 There is a big shorebird festival, held every spring in Homer. The Kenai Peninsula is loaded with migrating shorebirds in early to mid May. Western Sandpipers, and Dunlins are the most abundant species. 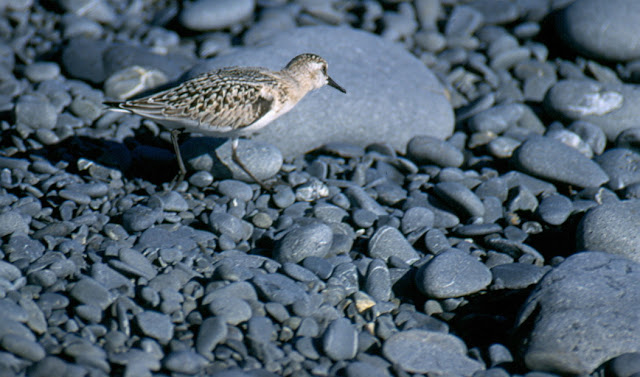 Sanderlings, like this southbound juvenile, are common further south, but not common at all in Alaska.
Posted by john at 5:23 PM

what a treat seeing all of them...