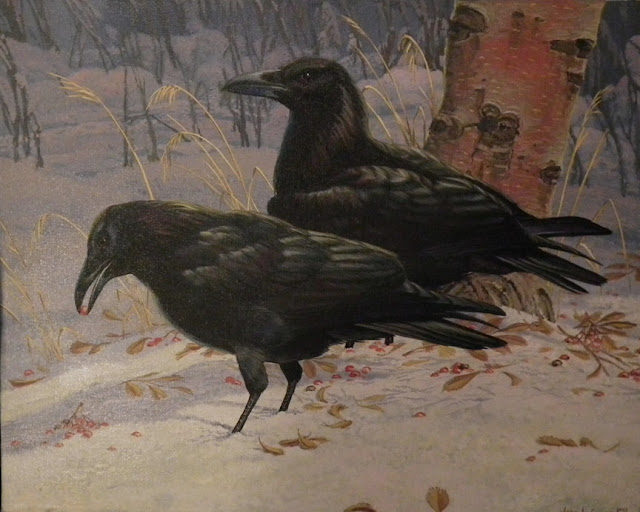 Back in 2002, I was comissioned to do a raven painting. The family who comissioned me wanted me to make it a winter scene, with the ravens fluffed up against the cold. I don't remember if they wanted the ravens to be eating Mountain Ash berries, or if that was my idea. This 16x20" painting is what I came up with.
I was not thrilled with the results, and they were too polite to say that they did'nt like it either. A few weeks ago, I ran into them again at a wedding reception. They mustered the courage to suggest I try to make the ravens fluffier. 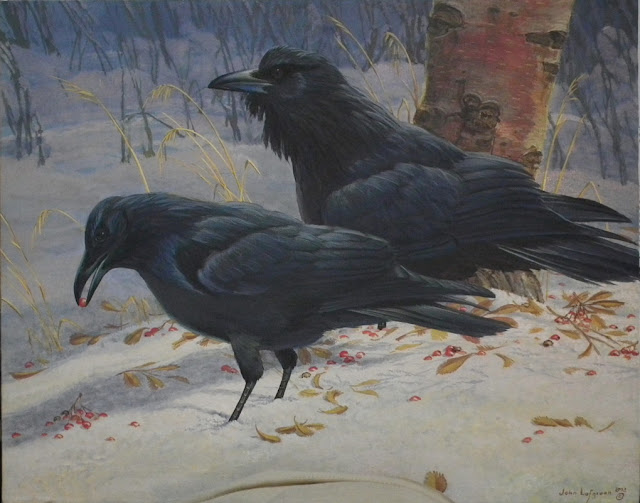 The problem is that it's difficult to get good reference photos of fluffy ravens. Even on the coldest days, they dont puff up like smaller birds do. I spent a lot of time re-working this one. I did'nt even try to puff up the bottom raven.  Does it look any better? I honestly cant tell. This photo does not show the highlights in the bird's eyes, but they are there in the actual painting. When the varnish dries, I'll call the painting's owners, and I hope they are satisfied with the changes I made. I cannot say that I am. 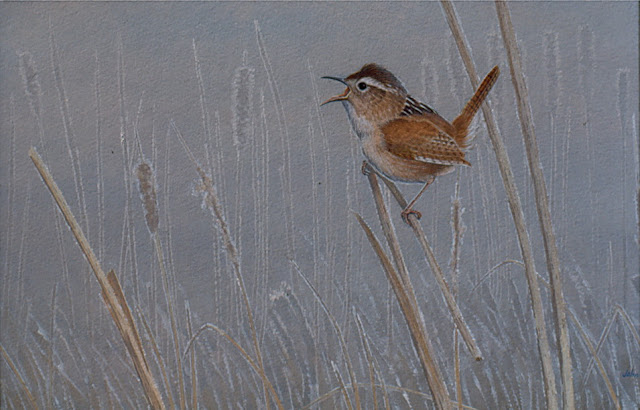 Here are some more of my old, Arizona paintings. This is a Marsh Wren. I think it was 10x24". It was inspired by the first Marsh Wren I ever saw, perched on frost covered reeds at Pintail Lake. I like it. 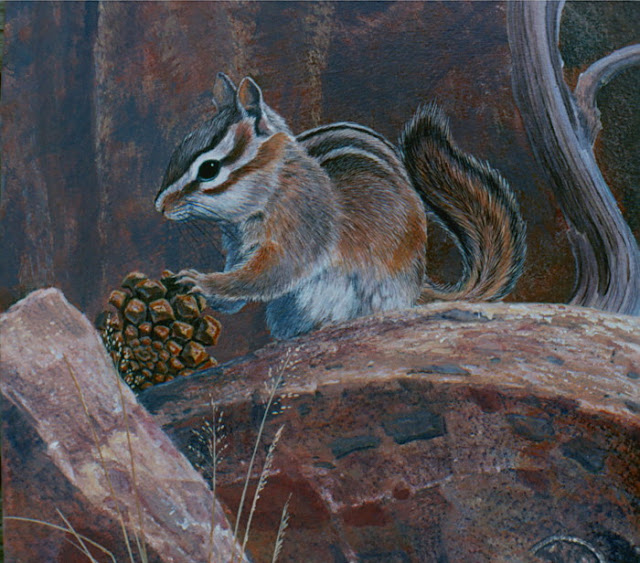 The local chipmunk species in the White Mountains where I lived, were Cliff Chipmunks. They eat a lot of Pinyon nuts, and juniper berries. I kept one for a pet. It was probably the most delightful pet I ever owned. A very intelligent creature. It used to sneak out of the house every day, and return with it's cheeks bulging with little pebbles. It would then deposit a small pile of pebbles underneath every pillow in the house. I would throw them out, and they would be replaced every day. It often taunted the neighborhood cats. 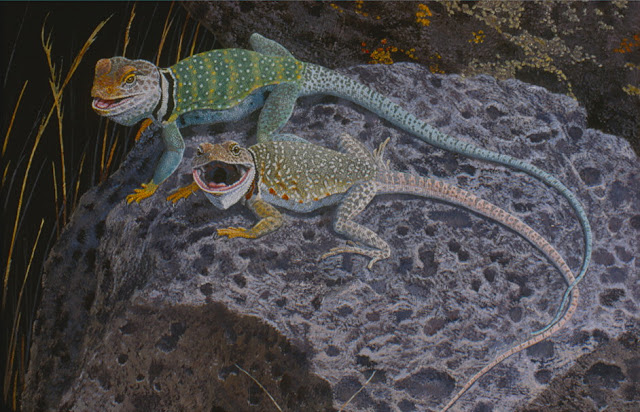 The area where I lived was of volcanic origin. A common type of rock around there was called Malapai.  The biggest species of lizard was Collared Lizard. I loved them, and I really miss seeing them. This is a male and female. They run on their hind legs, like little dinosaurs. 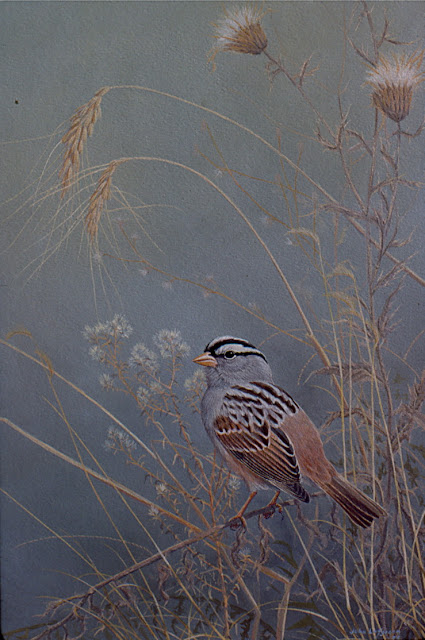 I lived in a semi-rural setting. My neighbors were displeased with me because I conducted an experiment to see how many years it would take for native plants to re-establish themselves if I did absolutely nothing to maintain my yard.
After about a decade my yard looked like this, great habitat for sparrows, like this White-crowned Sparrow. I used to tell people that my yard looked so much better than theirs. They did not agree.
This painting was a Gouache, painted entirely from the weeds growing in my yard. 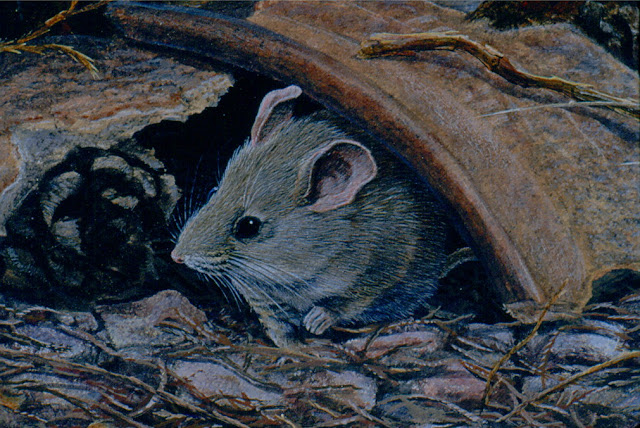 There was lots of Native American, (Mogollon culture) pottery shards lying around. This is a Pinyon Mouse utilizing some of it. 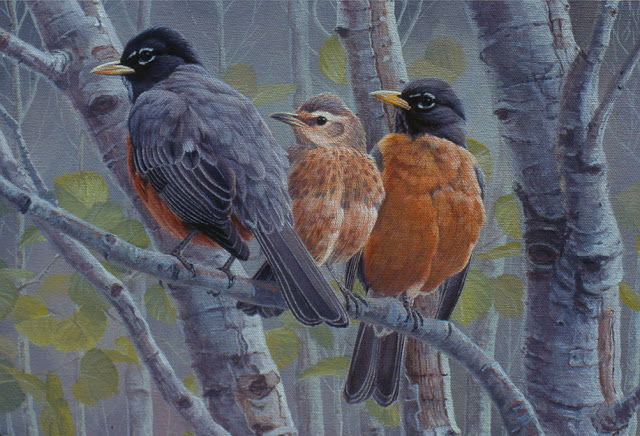 A robin family that I observed and photographed next to the Little Colorado River. 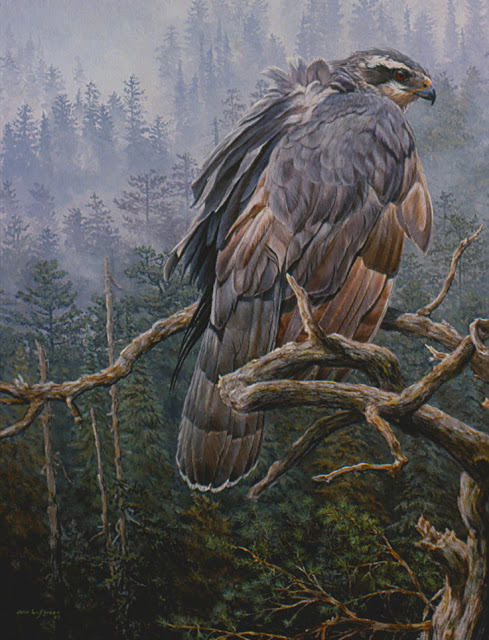 The Az. Dept. of Game & Fish used to bring me orphaned and injured critters to rehabilitate, like this very onry Goshawk. It sunk it's long talons into my flesh, but I got good reference photos in the bargain. I have used this same pose in two different paintings. The painting above was 20x16, or 24x18". 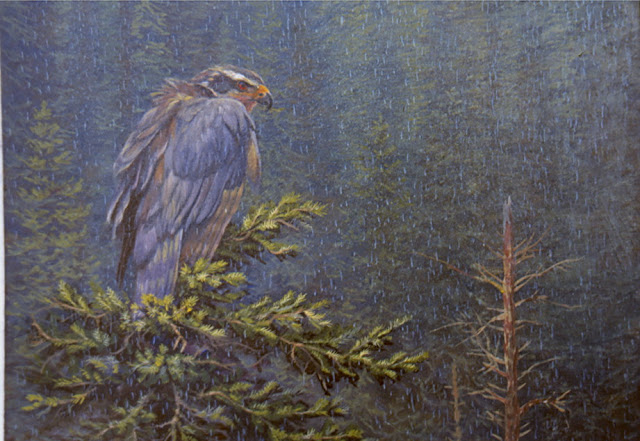 The second version, painted here in Alaska, looks better to me. It is much smaller, 8x10, or 9x12", I dont remember for sure. It's raining. 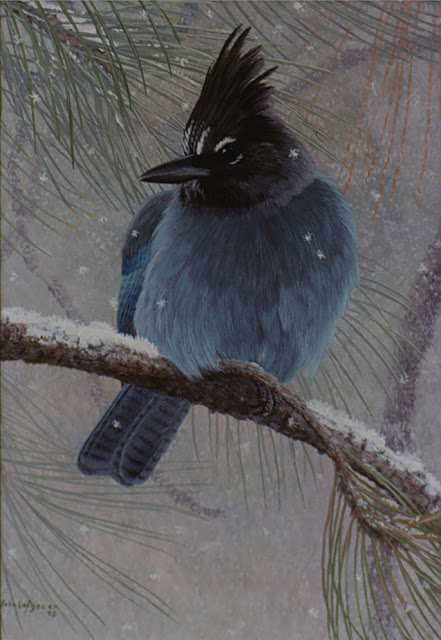 A small study of a Steller's Jay. I used to see these guys everyday in Az. I only see them once or twice a month around here. 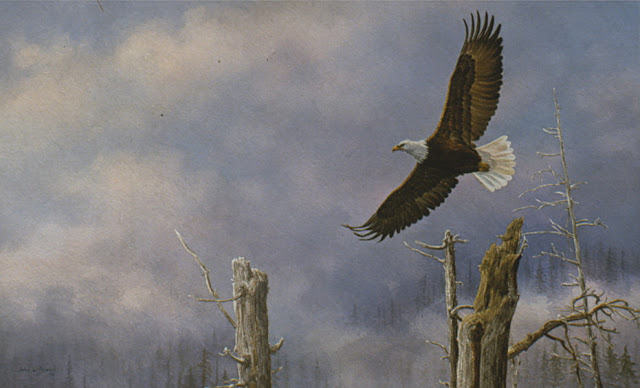 Another goache painting. Bald Eagles occur in the White Mountains, but they are much harder to approach  there, than the local Bald Eagles hereabouts.
Posted by john at 9:14 PM

It seems to me the only time I see Ravens fluffed up is when they puff up to caw.The cold does not seem to bother them as the tend to delightfully play leap-frog in the snow.
Hugs!

Love reading the stories behind each painting. Plenty of inspiration to keep me motivated. thanks for sharing John!