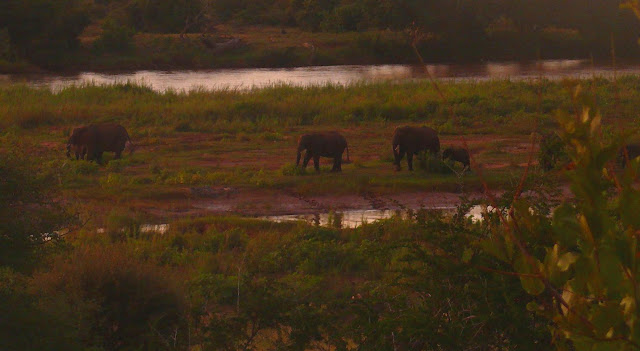 " We set out before first light and enjoyed watching the world slowly brighten up in the warm colors of dawn. There was a distant group of Elephants that gradually materialized out of the shadows down in the river valley...." 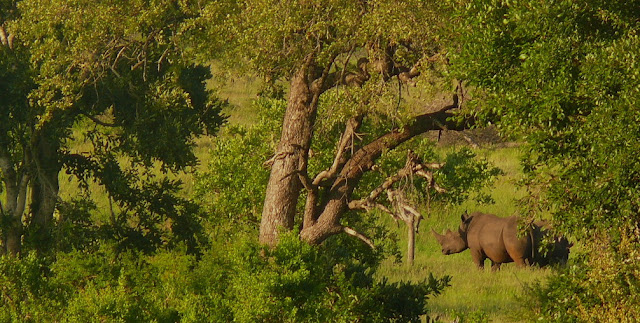 " One of the big African animals that I most wanted to see was a rhinocerous. We finally got two of them when we spotted a female White Rhino with a growing calf. There were quite a distance from the road, but it was a great thrill to see them." 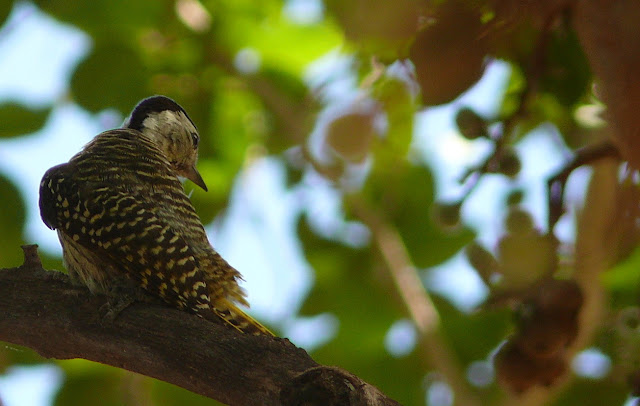 " We got another species of woodpecker in a fig tree. It was a female, Cardinal Woodpecker." 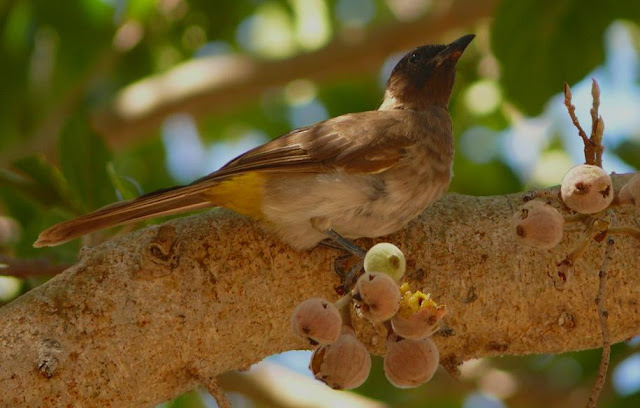 " The most common bird species in the fig trees were naturally, Common Bulbuls. One individual posed very well for me." 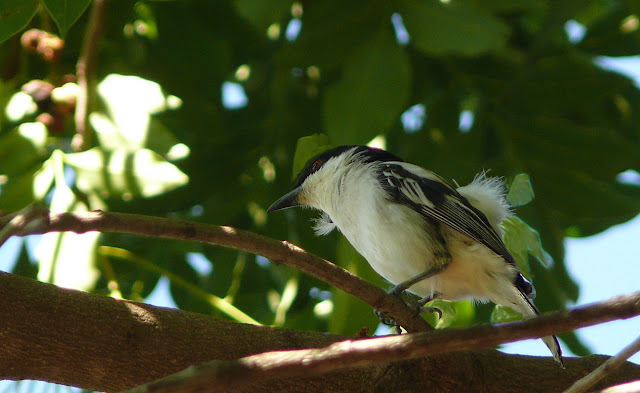 " Then came another striking, black and white bird. It had a red eye and a tuft of fluffy, white feathers on it's lower back. That tuft of feathers is the diagnostic field mark of the Southern Puffback. One of the many shrike relatives." 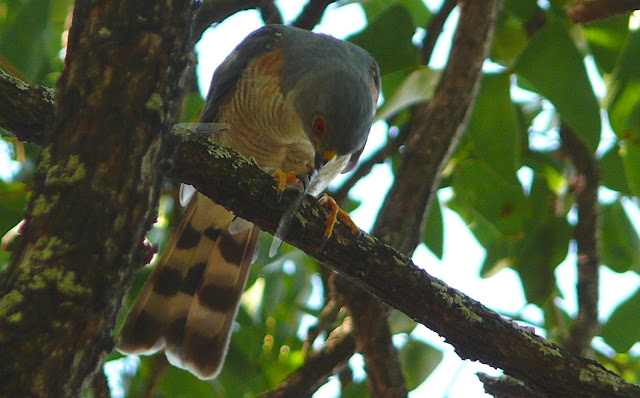 " I noticed a small accipiter fly into a tree very close to us. It was distracted by a large locust that it had just captured, so I was able to get very close to it. I shot many photos before I even started trying to figure out what it was.
Tom thinks it was an African Little Sparrowhawk. I thought it might be a Shikra. The field mark that distinguishes the two species is whether or not it has a banded, or plain upper tail. The photos I took do not show it's upper tail, but I'll take Tom's word that it is an African Little Sparrowhawk. That would make it a lifer for me." 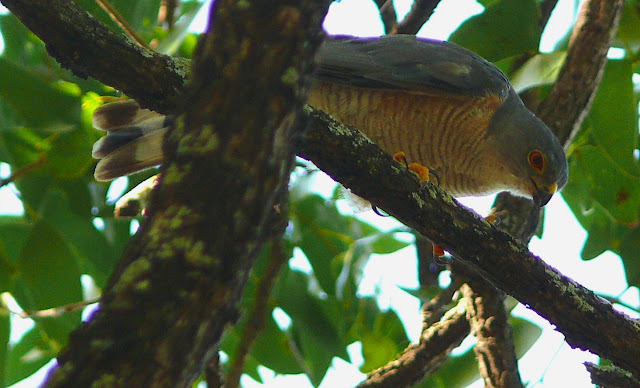 Another look at a great little raptor. 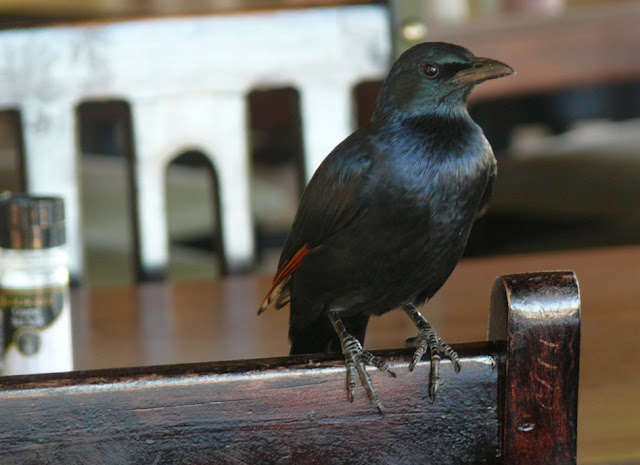 " While we tried to eat breakfast at the outdoor dining area, we kept getting distracted by the fearless birds trying to share our food. The most bold species, were Red-billed Buffalo Weavers, and RED-WINGED STARLINGS. Some of them landed on the tables, and grabbed food off the plates as soon as we glanced away." 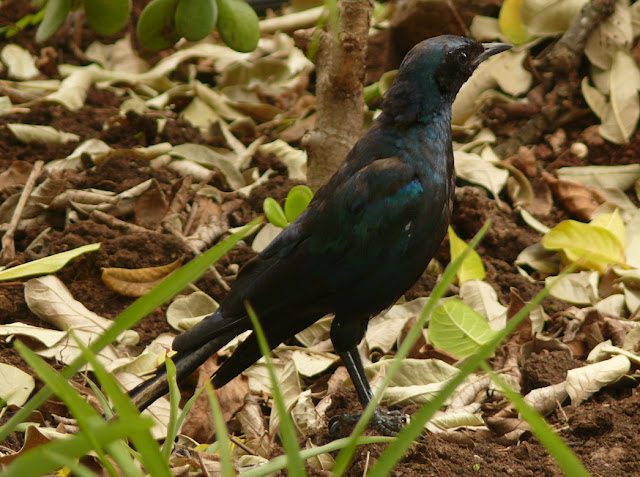 " Other predominate birds at Satara were some large, BURCHELL'S STARLINGS, and more Greater Blue-eared Starlings." 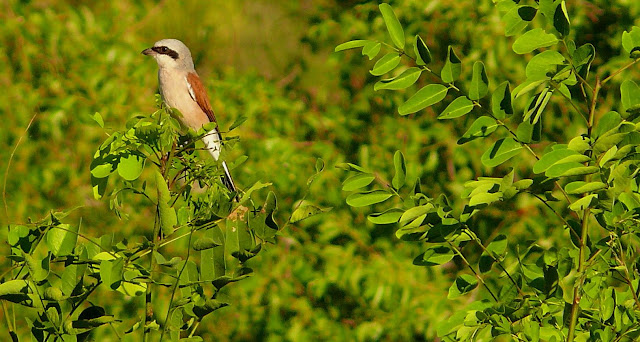 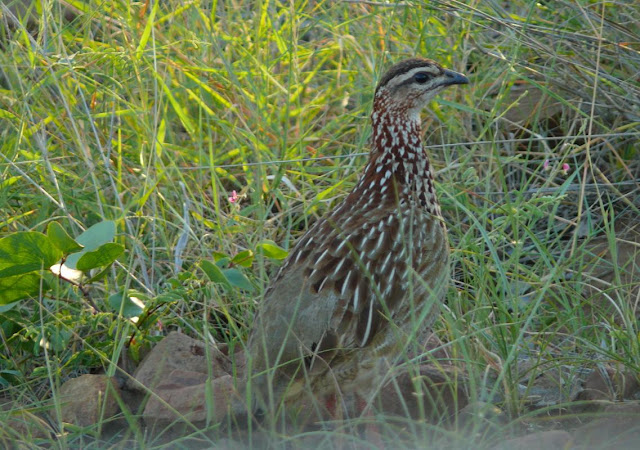 " Right near the road we stopped to admire an attractive, Crested Francolin. I got several photos before it wandered into thick vegetation."

" There were some small birds in  the dirt near the earthen dam. They turned out to be Chestnut-backed Sparrow Larks. The males were very striking."
Posted by john at 4:15 PM