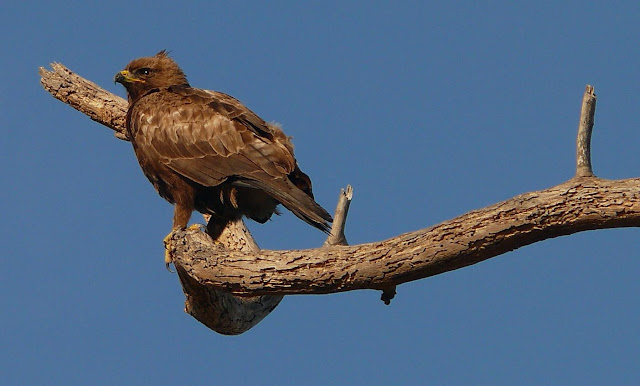 " Today it really hit home just how inadequate my cheap field guide is for identifying birds, especially raptors. We started seeing several large, brown raptors. They seem to be devoid of distinctive field marks. The field guide did not show, or mention many of the crucial field marks between similar birds. We would have been at a loss to identify them except that Tom bought a great photographic guide to the raptors of Southern Africa at one of the rest camp gift shops.
We got very close to a raptor that did'nt fly even after we stopped almost directly below it. After taking some photos and studying it's subtle markings, I slowly got out of the car and it still did'nt fly. We noted it's relatively small feet, fully feathered legs, and short crest. An adult Walberg's Eagle. It allowed me to get really close photos." 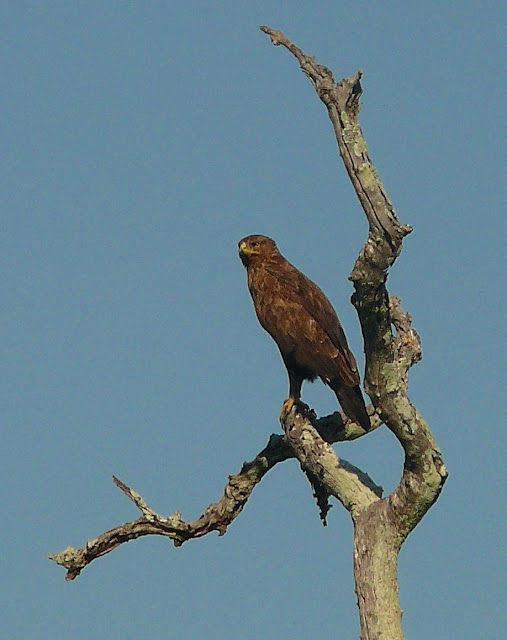 " A short time later we came upon another large, plain brown raptor. It was noticeably darker than the Walberg's Eagle. I got photos but despaired being able to identify it, no distinctive marks at all. Then it flew and we saw that it had three white spots on it's dorsal side, one above the tail and one on each wing. That clinched it, Lesser Spotted Eagle". 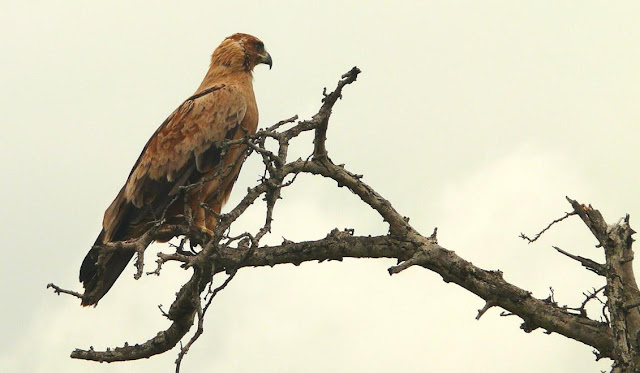 " Yet further on we saw an even larger raptor. The light was very harsh behind it, but I got passable photos of a Tawny Eagle." 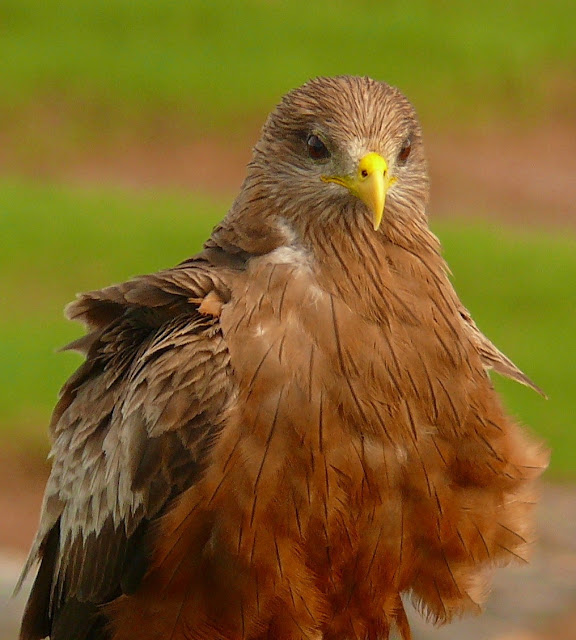 " We drove across a bridge spanning a shallow river. There was a Yellow-billed Kite perched on the railing. We drove up to it slowly, stopping several times to take photos. It allowed us to get right up to it and still did'nt fly. Yellow-billed Kites are a form of the widespread Black Kite."
The Yellow-billed Kites that Tom and I saw in South Africa were much more colorful than the same species in Uganda. 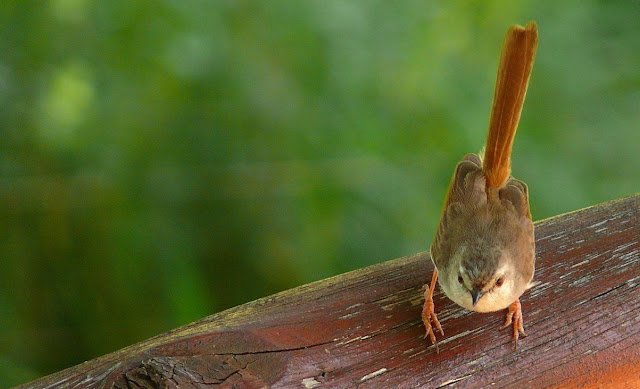 " The best photos that I was able to get at Skukuza were some tiny, Tawny-flanked Prinias. There was an adult feeding a fledgeling. They were fearless of people." 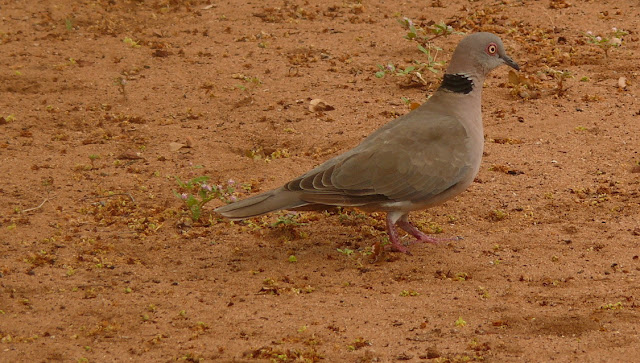 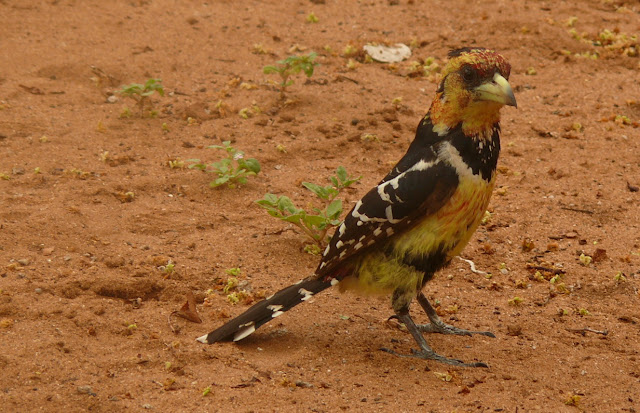 " While I ate lunch on the back porch, a pair of Crested Barbets showed up to beg for handouts. I did'nt feed them." 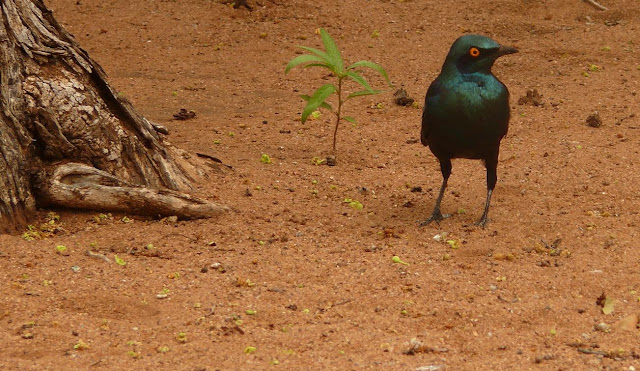 " Soon a Greater Blue-eared Starling joined the barbets. It went hungry as well. I dont think that it's good to encourage wild animals to become dependant upon humans for food." 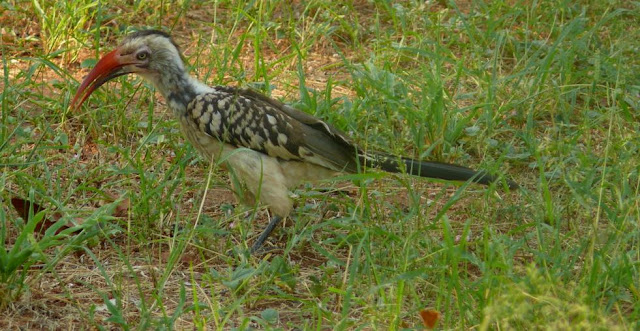 " In front of our bungalow at Shingdwezi, there was a very cooperative, Red-billed Hornbill foraging on the ground. It was fearless, and allowed me to get good photos. It looked completely pre-historic to me" 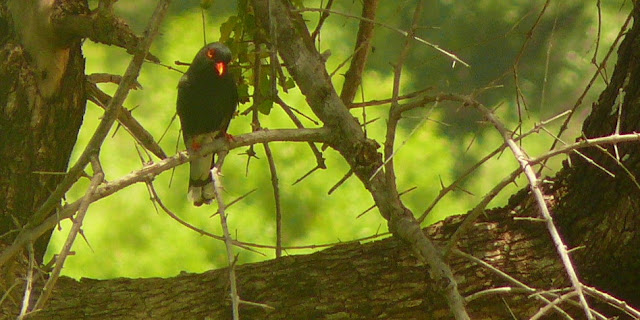 " At another pullout we found a Ret'z Helmet Shrike. It was an attractive, little bird." 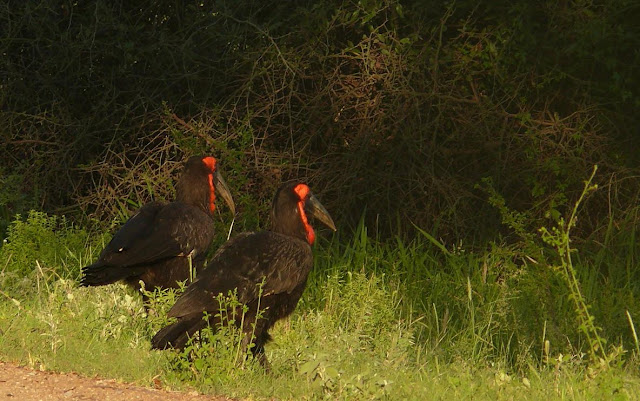 " Not far along the road we saw some Southern Ground Hornbills walking near the road. They were making some deep, booming noises as they walked along." 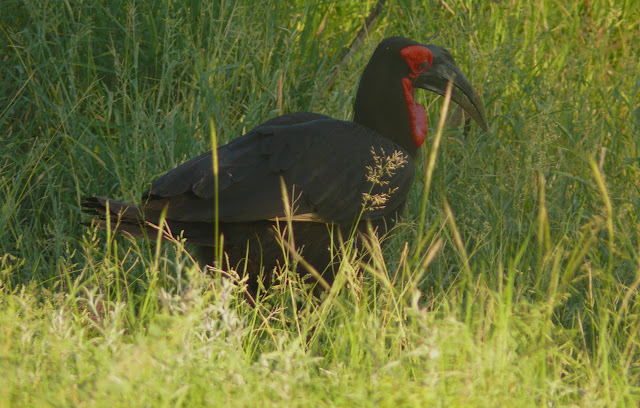 " I was impressed by how large they were. They could probably swallow a little, Red-billed Hornbill whole. I understand that their population is declining dramatically." 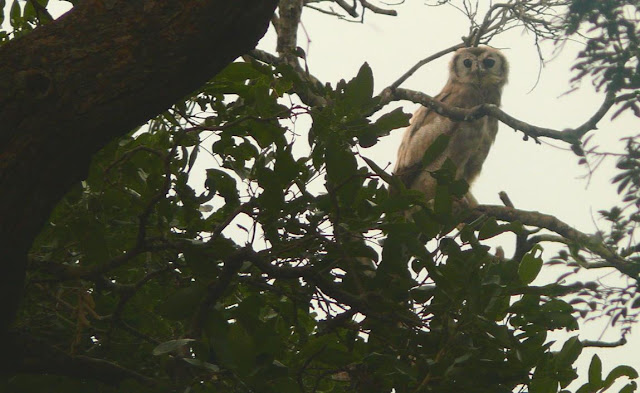 " At another pullout along the river we spooked up a huge owl. At first we thought it might be a Pel's Fishing Owl, one of the rarest birds in South Africa, all of Africa in fact. After studying the field guide, and comparing the illustrations with the poor photos I took, we realized that it was a Giant Eagle Owl, also called Verreaux's Eagle Owl. It was clearly much bigger than any other owl that I have ever seen. It started hooting, so loud it almost shook the ground."
Posted by john at 10:31 PM

Thanks for sharing John. All those Hornbills are unattractive..
That Giant Eagle Owl looks more like a monkey!
Very nice to see these species.

Thank you fot your comment. Ever been to Africa?