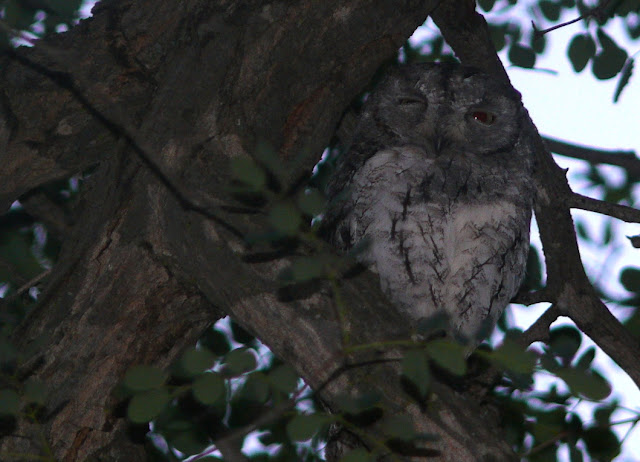 TRIP JOURNAL EXCERPTS, " One of the rest camp employees saw us birding and asked if we would like to see an African Scops Owl? We enthusiastically answered in the affirmative, and he led us to a nearby tree. There was a little owl, just coming to life in the growing shadows of dusk. It was only about ten feet off the ground, in full view. To me, it looked just like a North American screech owl." 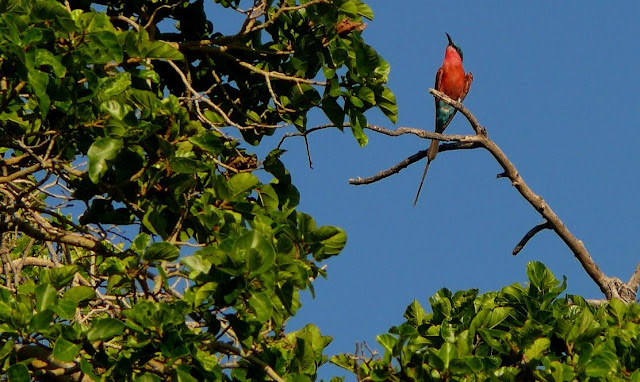 " One really great bird we saw next to the river was a Southern Carmine Bee-eater. It was not really in prime breeding colors, but was very colorful nonetheless." 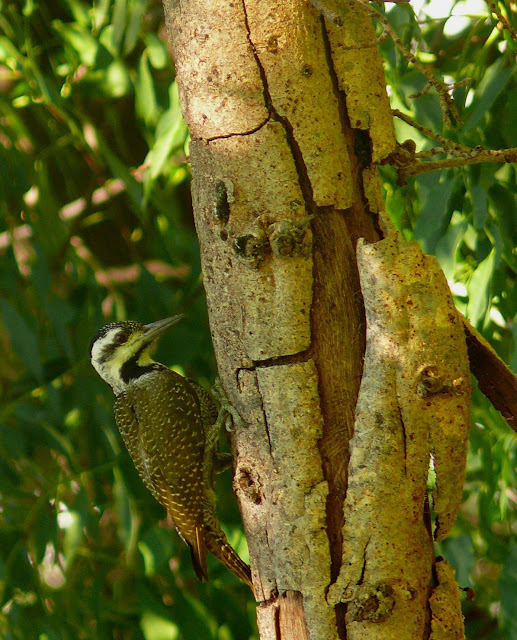 " The birding was strong even in the midday heat. I spotted Africa's largest woodpecker, a Bearded Woodpecker. It was a female, and really not all that big. It stayed put for a long time, allowing me to take many photos, but it was hard to get a clear shot of it's head because of ot's continuous hammering on the tree trunk." 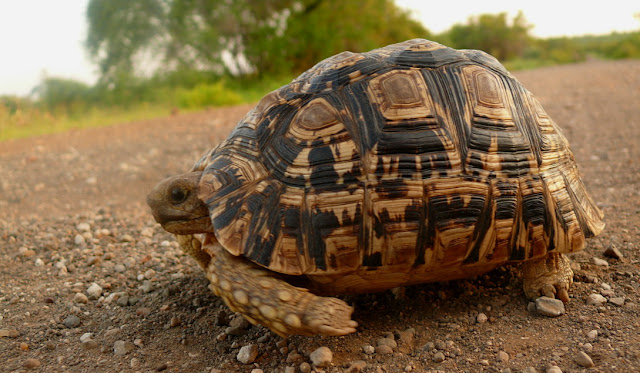 " We stopped to check out a Leopard Tortoise crossing the road. I resisted the temptation to pick it up and play with it, but I really admired it's bold colors. What a treat."
We ended up seeing many Leopard Tortoises on that trip. 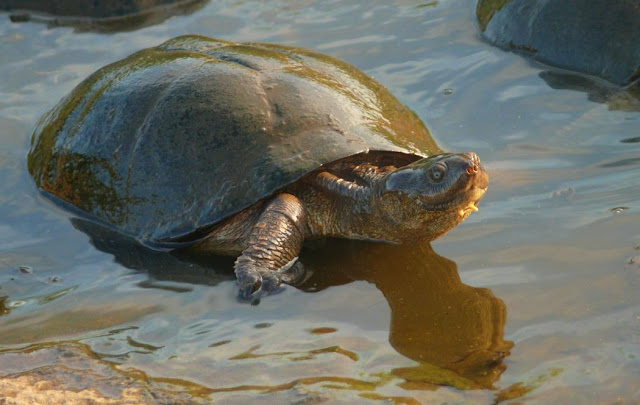 " We took a side road leading down towards the river. At one point the road nearly led us into a side slough. We stopped only about 3 feet from the water. Immediately a bunch of turtles scrambled up to us, obviously hoping to get fed. I did a big no-no and threw out a handful of cheetos to see how they would react.
They gobbled them up and even left the water and came right up to the car. I think they were Side-necked, or Snake-necked turtles of some kind. Soon a small crocadile came up to us but he got no cheetos." 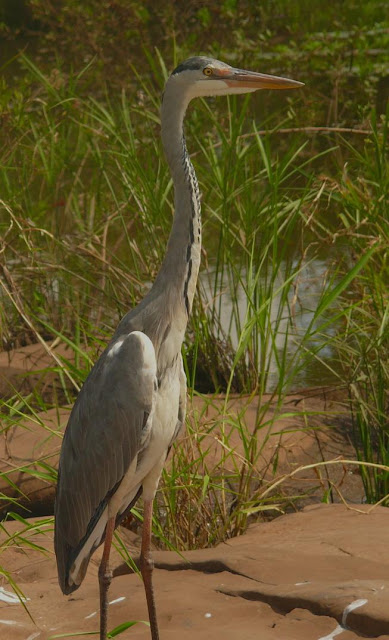 " Shortly thereafter we drove up to a Grey Heron next to the river. It let us get very close, and posed for me." 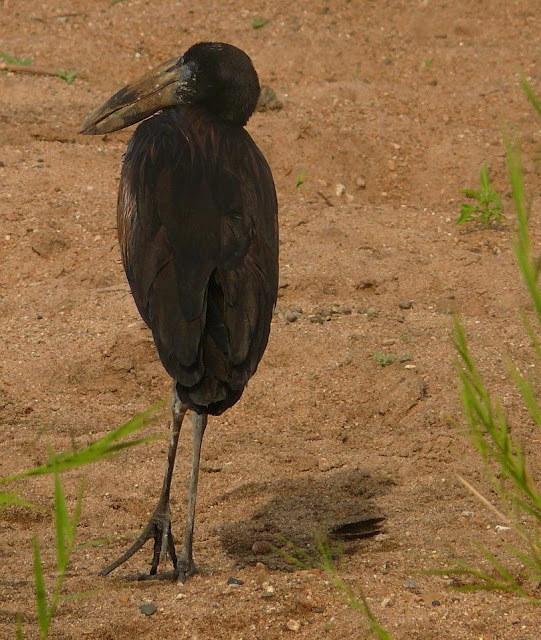 " Along the river bottom we came across a very somber, African Openbill. As stately as an old time funeral director. Not an attractive creature"

" Right by the openbill we noticed a Three-banded Plover busily preening..." 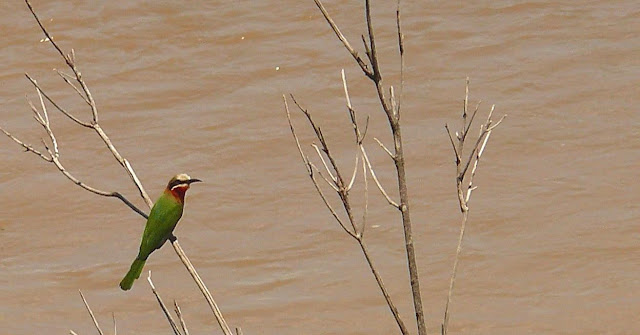 " We got a new bee-eater, a White-fronted Bee-eater, before we left the river. I could not get close to it." 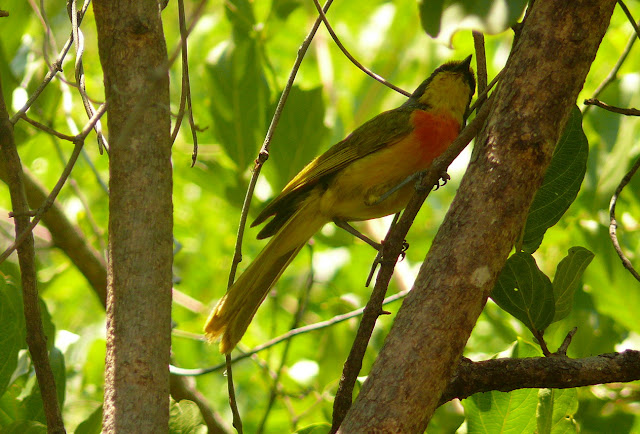 " Tom got really excited by a Sulpher-breasted Bush Shrike. He really loves the bush shrikes, and robin chats. They are colorful birds for the most part. I like them too, but that does'nt mean much, I like all birds" 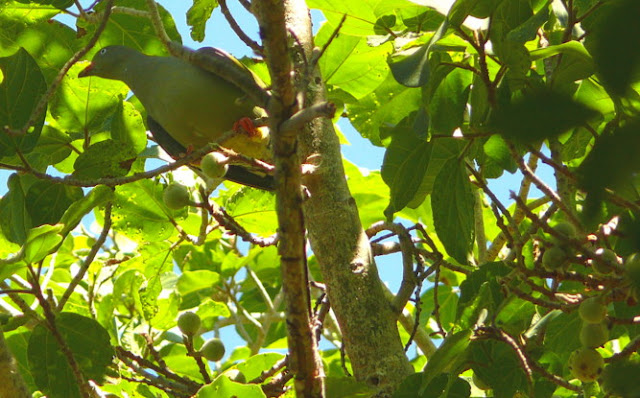 " High up in the tree, there was an African Green Pigeon, very pretty, but shy. I could not get close photos." 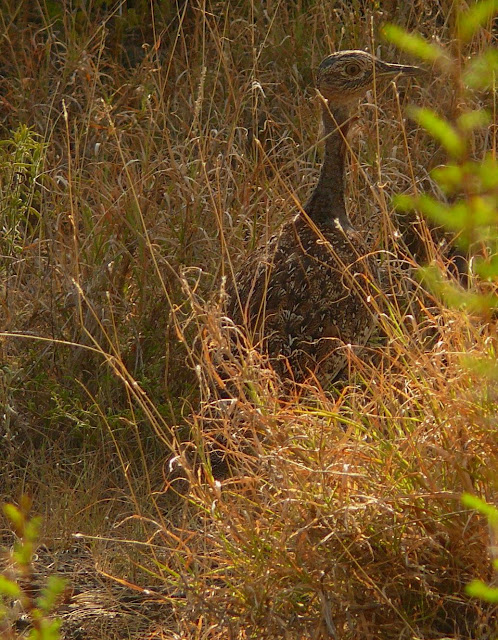 " There was a Black-bellied Bustard in the scrub beside the road. I managed some decent photos. It was another great bird."
Posted by john at 9:47 PM

Hey Johnny, this is your niece, Kimberly! I love reading your stuff and seeing all your beautiful pictures! I don't know if you check your comments that often so I will probably call you too (when I get your # from my mom). But I really wanted you to do a painting for us! I really liked that 3 elk wrap around painting you did a few posts back. I'll let you know more info and hopefully you can do one for us!

Hello Kimberly, Jump fast if you want those Elk paintings, I'm shipping them to a gallery in Sedona on monday. My e-mail is, johnlofgreen@gmail.com.

I envy your birding adventures John. Thanks for sharing; these are very interesting birds that I probably would never dream of ever seeing in their natural habitat.
My life list is nothing to brag about...but at least I get to see yours! congrats!