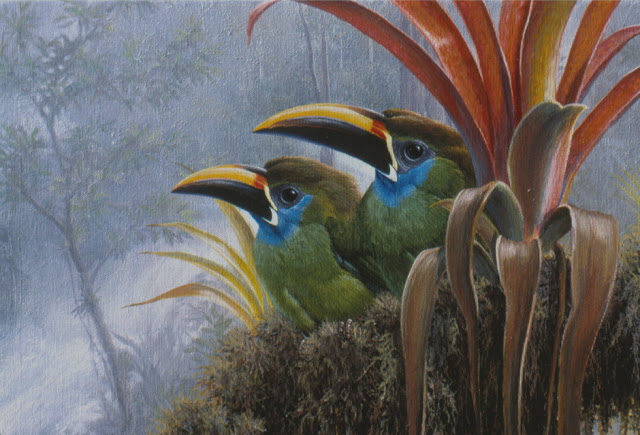 Digging deeper into the vault of recently re-discovered slides, I found many photos of old paintings from my Arizona days that I had completely forgotten about. Taking in the large volume of artwork,  I can say that I make up in volume, what I lack in talent.
This is an 11x14" canvas I believe. The subject is a pair of Emerald Toucanets in Costa Rica. 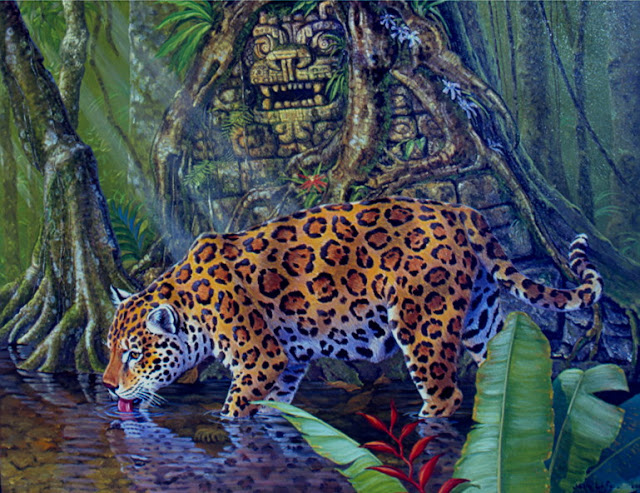 Here is a fat Jaguar. It is probably an 18x24" canvas. Another one that had slipped from my memory until I saw the 35mm slide.

A better Jaguar painting. I remember more about this one. It is 15x30", and titled, Stepping Stones. If I were to do another version of this painting, I can think of some changes in perspective etc. that would greatly improve the composition. For instance, the waterfall would look so much more natural if it were curved, rather than a diagonal line as it is now, and toned down a little. The big tree in the foreground needs to be moved closer to the center. Someday I'll get around to it. 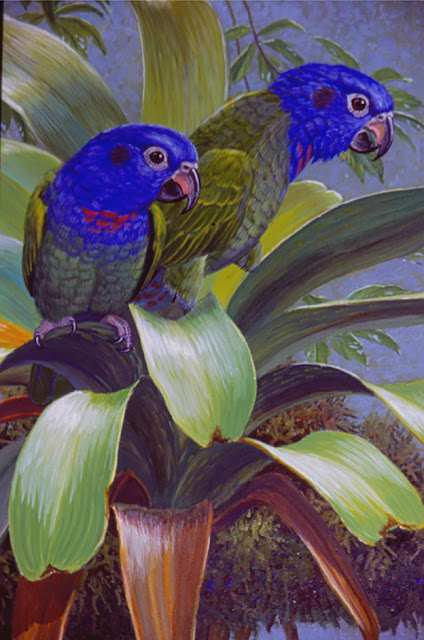 The field guide calls these birds, Blue-headed Parrots. In the pet trade, they are known as, Blue-headed Pionus. I have seen them in Costa Rica, and Peru. Wonderful birds. I forget the size and title of this painting. The blue in the photo is much flatter than it is in the actual painting, as I remember it. 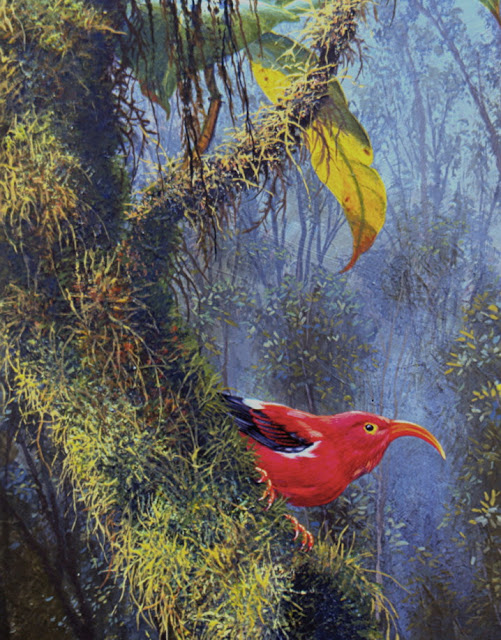 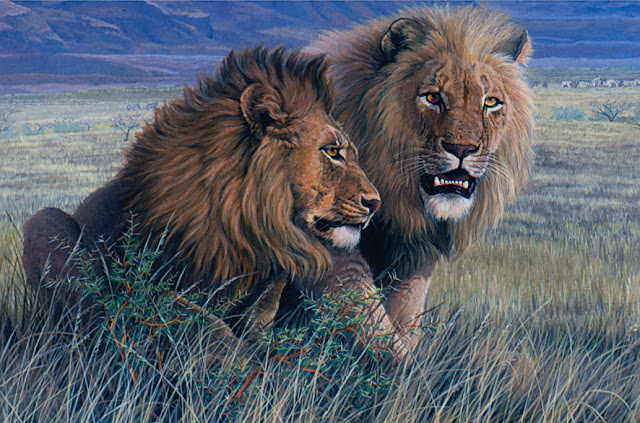 I may have posted a photo of this 16x20"painting from Arizona days before. This is a better photo. This painting represented a new level of painting skill for me when I painted it. Much better than anything that came before. It sold fast. 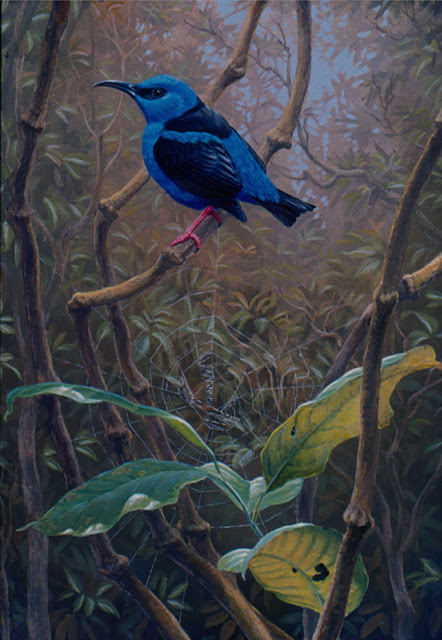 This is a painting of a bird that I had long wanted to see in the wild, a Red-legged Honeycreeper, painted before I had actually seen one. This was painted after I had seen the bird. We rode in a bus from the capital of Costa Rica, San Jose, to the tiny town of Fortuna. It rained the entire 5 hour trip. It was pouring hard when the bus dropped us off on the corner. We rushed over to the first hotel we could find, half a block away.
After we finished checking in and unpacking, I noticed that the rain had slacked off. I grabbed my binocs and decided to explore the neighborhood. Right across the street from the hotel, I saw a hummingbird visiting the flowers of a Hibiscus bush. It was a Rufous-tailed Hummingbird. Then I heard a sharp chip coming from inside the bush.
I peered into the dense bush and saw a male, Red-legged Honeycreeper. It took my breath away. A highlight of my birding carreer. They turned out to be very common in Fortuna.
I still have not done the bird justice in paint. 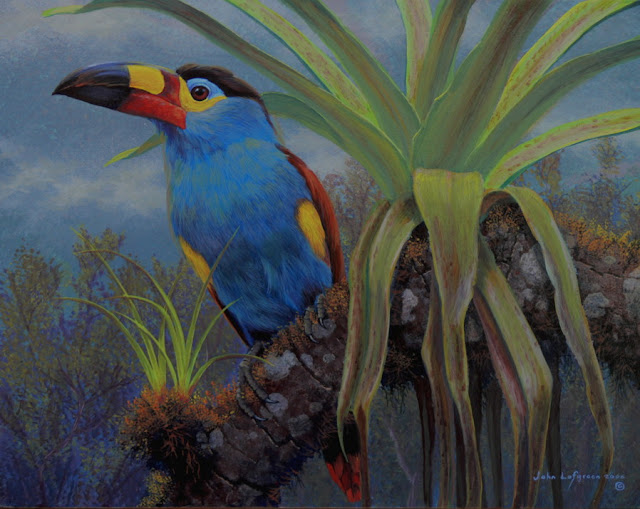 Another painting I did before actually seeing the bird in life, a Plate-billed Mountain Toucan. It was another milestone species when we saw them in Ecuador, what a thrilling bird, what an unsatisfactory painting of it. 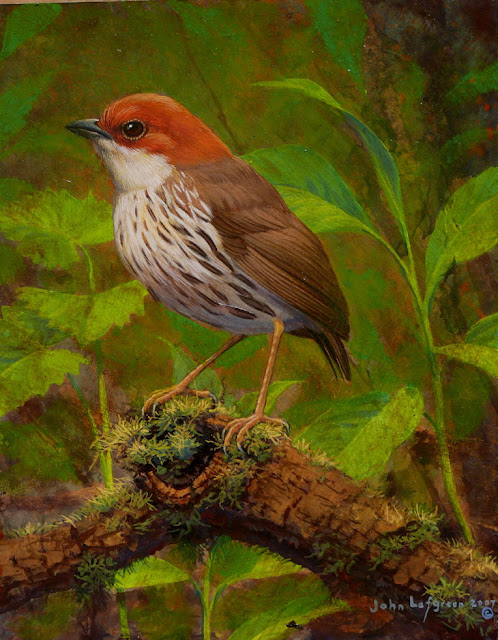 I must have posted this painting before. We saw this Chestnut-crowned Antpitta, not far from the Mountain Toucans. I was relieved that it sold. 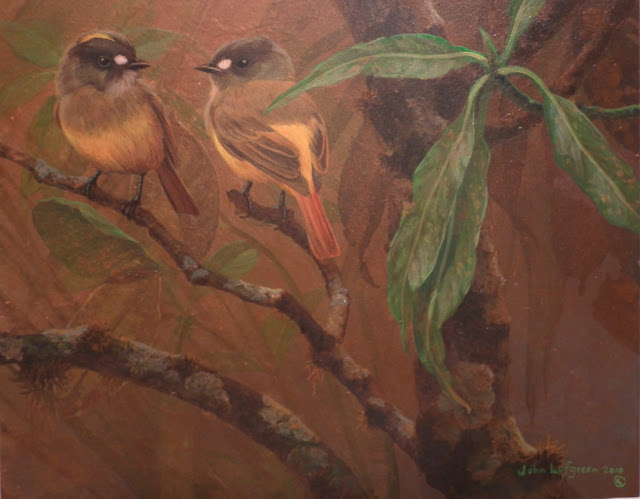 Another species that we saw in the same region of Ecuador, Ornate Flycatchers. I was certain that I would never be able to sell this 8x10" painting, so it got recycled. I would do many more tropical subjects, but I have no real venue for selling them. 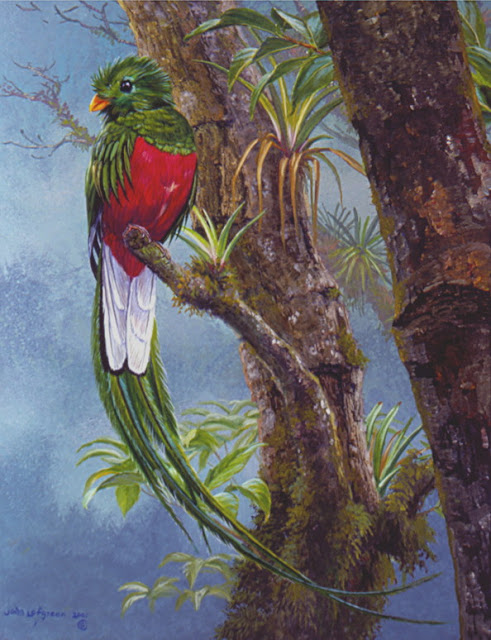 One of the world's most spectacular birds, but a definite challenge to paint. The Resplendant Quetzal is a subject that deserves a better effort on my part. I do have an idea that I am developing in my head. We'll see if it ever comes to light.
Posted by john at 8:01 PM

WOW! So many paintings!! I appreciate when artists share their earlier works...I am not so brave and tend to hide them out of embarassment. I should accept it as being part of the evolution of an artist.