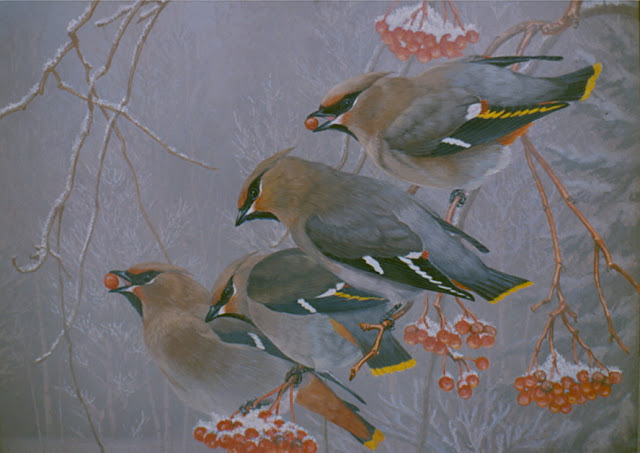 There are three species of waxwings, Bombycillidae, in the world, all occuring in the Northern Hemisphere. They are closely related to the silky flycatchers, which contain four species, all restricted to the New World. The waxwings are, Cedar Waxwing, which occure over most of Canada, throughout North America, as far south as Costa Rica.
Bohemian Waxwing, which occurs in northern North America, and Northern Eurasia.
The final species is the Japanese Waxwing, which has a red, rather than yellow, tail tip. I would love to see some of them someday.
The only waxwings that I can remember painting are Bohemian Waxwings.  I had never seen until I came to Alaska. The waxwing painting above is 11x14", and was painted 14, or 15 years ago. It sold right away. I forget the title. 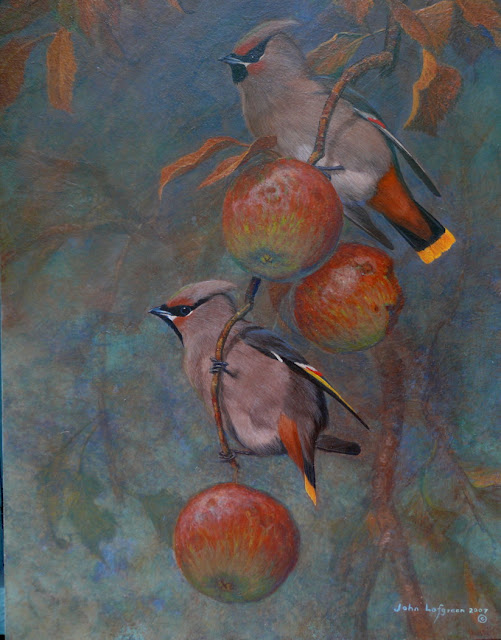 This painting, 20x16", came several years later. I never liked it, never displayed it, and I believe that I eventually painted over it. I have started a number of other waxwing paintings that I never bothered to finish. That is why I seldom post step by step tutorials of a painting's progress until after it is finished. 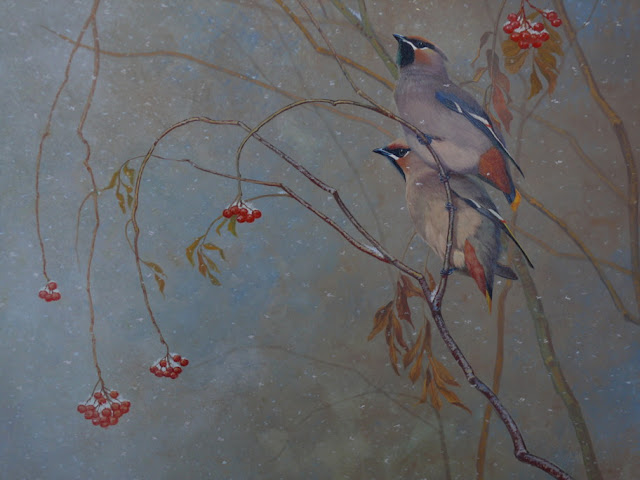 Another 16x20" waxwing painting that I was'nt too thrilled with. I did bring it to a gallery, but they refused to hang it. I can't remember whether I gave this one away, or painted over it. It is not  so very terrible, but not quite up to par. Notice that the bottom bird in this painting is the same bottom bird in the previous painting. I think I have painted a few other small waxwing paintings, but I never photographed them. 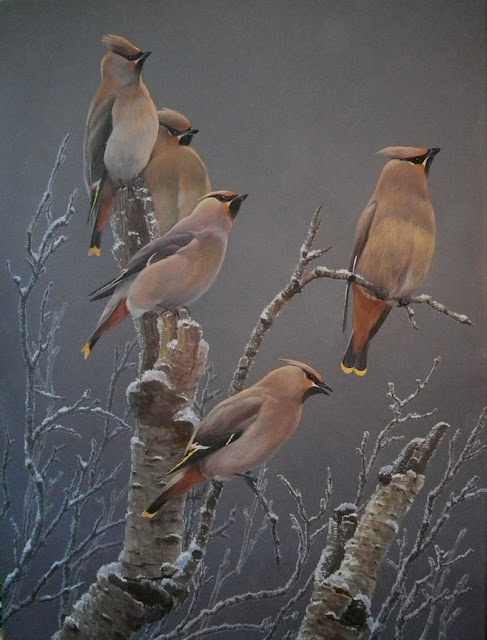 So this is the painting that has kept me busy for the past few weeks. It is probably my best, and certainly my biggest waxwing painting, 24x18". So far untitled. 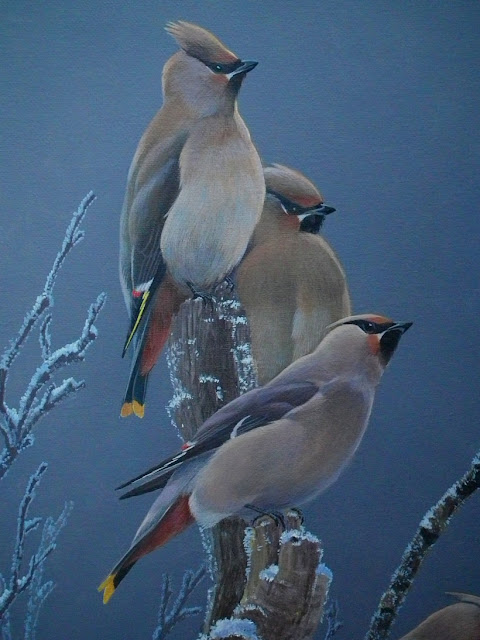 It was inspired by a poor quality photo of some Bohemian Waxwings perched in a Birch Tree that had snapped some of it's branches off in high winds. 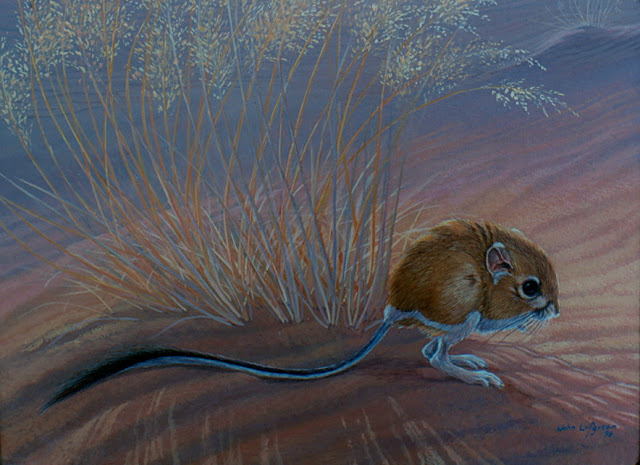 While I was gathering photos of old waxwing paintings for this post, I found a stash of old slides of paintings from pre-digital days. I scanned the slides, and now I have some material for future posts. The Kangaroo Rat is from my Arizona years. 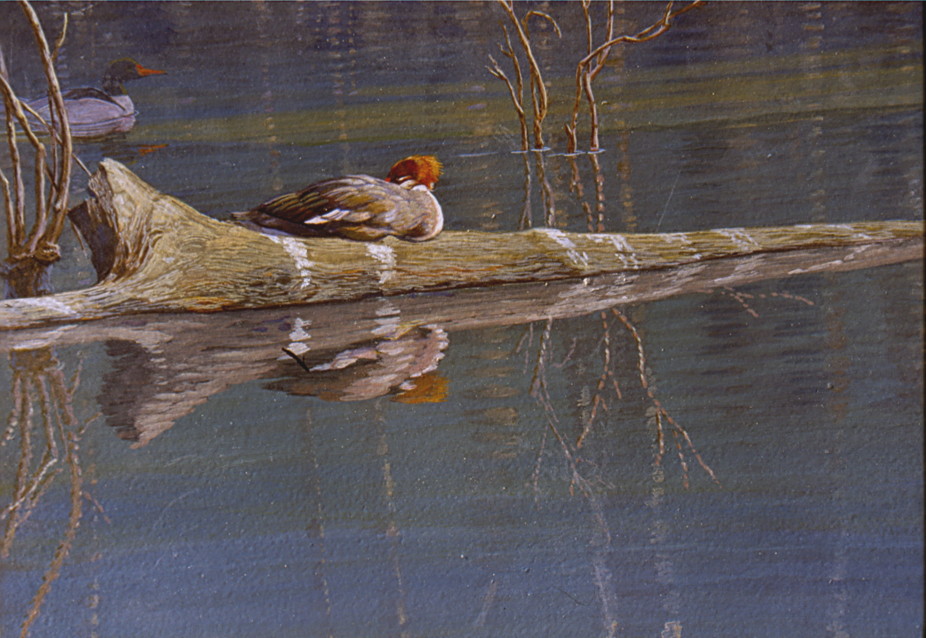 I dont remember the title of this painting of Common Mergansers. It is 16x20". 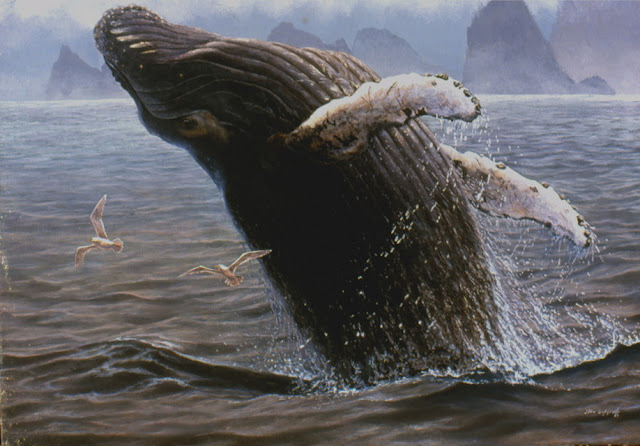 Another old Arizona painting of a Humpback Whale. I dont remember the title, but it's also 16x20". I often painted Alaska subjects, even before I ever thought about moving to AK. 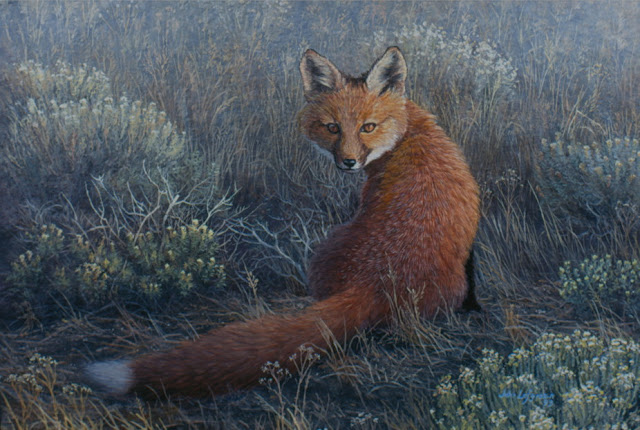 Another popular painting from the Arizona days. This is a poor quality photo, but I really liked this 8x10" Red Fox. 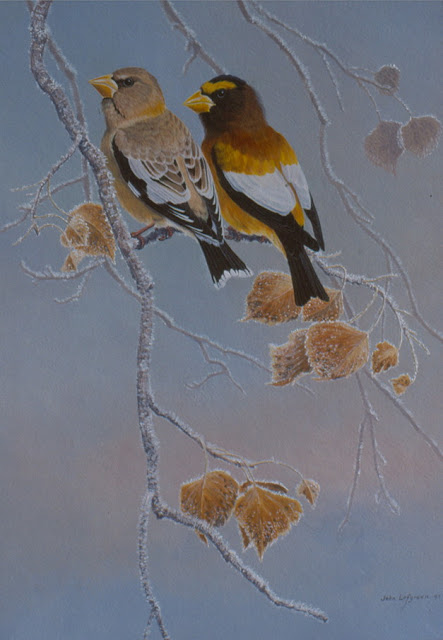 I dont remember the size, or the title of this painting of Evening Grosbeaks. I remember going into my neighbor's yard in Lakeside, AZ. to photograph the frosty cottonwood leaves and branches. The thermometer read, 0 degrees farenheit on that morning. Very cold for Arizona.
There is some minor excitment amoung birders in the nearby town of Palmer these days, because a male, Evening Grosbeak is being seen at someone's feeder. They normally dont occur anywhere around here.
Posted by john at 5:41 PM

John Beautiful paintings of some of my favorite birds. I love waxwings, I especially love to watch them pass berries to each other. Cedar Waxwings are very common here in Utah. About 3 years ago we had an eruption/invasion of Bohemian Waxwings, they were quite common that year but very few have been reported since then. They are often seen in the Uinta Mountains during winter.

A couple of winters ago I went out looking for Evening Grosbeaks and found a large flock of them mixed with Cedar Waxwings, I think I posted pictures of that day on my blog. That was a very nice day to see two of the most beautiful birds flocked together.

Thanks for sharing you wonderful paintings of some incredible birds.

Steve, I always enjoyed seeing the local Cedar Waxwings in Arizona. They were not so common, but we saw them several times a year.
The Az. Dept. of Game & Fish brought me an injured female, Evening Grosbeak to rehabilitate. It never could fly well enough to be released, but she became very tame. She was a great house pet for the rest of her life.

Do love those waxwings - amongst some of my favorite birds! And a great series of them in your paintings too - all quite lovely! Some years ago when I lived in Hong Kong, I was lucky to find and report on the first ever sighting of Japanese Waxwings there so this genus has a special interest to me and to date, I have made quite a few studies of them.

Jeremy, You must post some of your Japanese Waxwing studies on your blog. I'm anxious to see them. I like your honey jar study as well.

John, you painted over some of these??!? They all look great to me!