Life in the Amazon Basin

Time to go back to Ecuador and wax nostalgic for warmer climes. After a great time in the Andes, (except for a nauseating bout of altitude sickness on my part), we took a long downhill bus ride. The road was treacherous in places, and the hairpin turns on sheer cliffs left my heart in my throat. 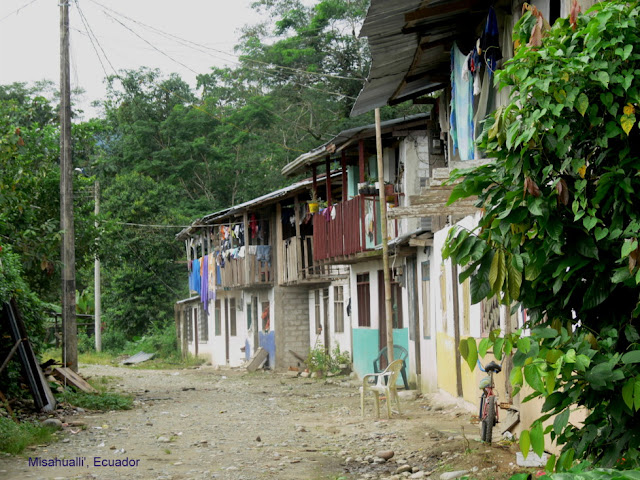 We went all the way to the end of the road, and stopped in the jungle outpost of Misahualli. Gary admitted that he was intimidated by the idea of staying in a lawless frontier settlement. There was nothing to worry about. The people were laid back, conservative, and friendly. The ramshackle homes in the above photo were built right up against the rainforest. 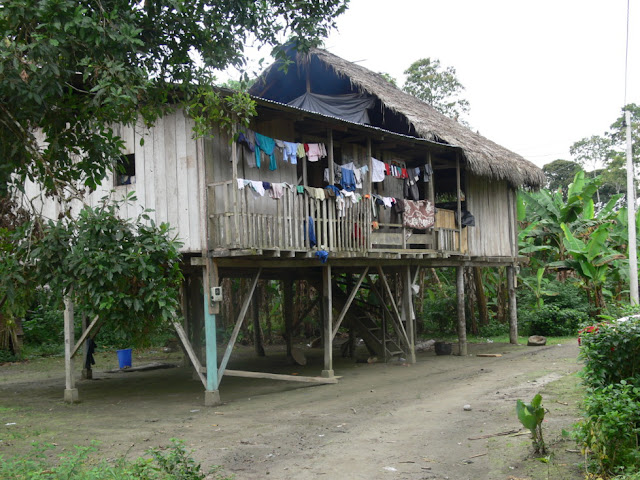 Outside of town, the houses looked just like this. Wet clothes were hung below an overhang because it rained without warning and often, sometimes all day and all night. I dont know if the houses were built on stilts because of frequent flooding, or to keep cooler, or to discourage insects and snakes. 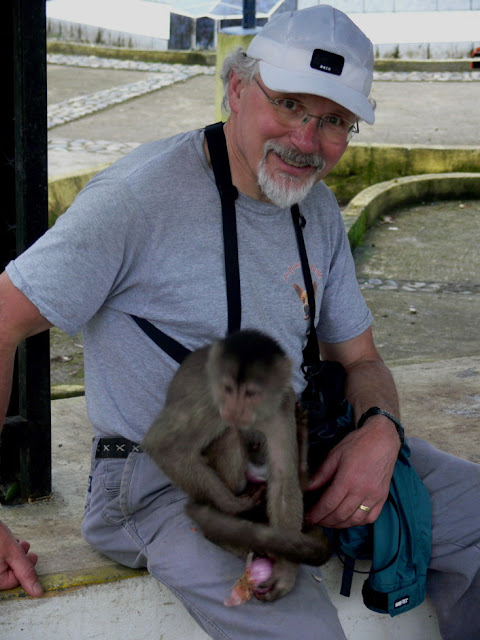 Like small towns everywhere in Latin America, Misahualli was built around a central plaza. It was the center of activity in the town, for people and for bold monkeys. We watched this Brown Capuchin pounding the ground with a stone. Then it carried the rock over to a parked car and began pounding the side of the car with it.
A local produce seller came over and handed the monkey two onions. The monkey promptly came over to Gary, climbed onto his lap, and began rubbing the onions all over it's body. All the monkeys in town smelled like onions. I think they were given onions to prevent the spread of lice. They did'nt hesitate to climb all over people, and try to steal things from them. They were both mischievious and sweetly affectionate. 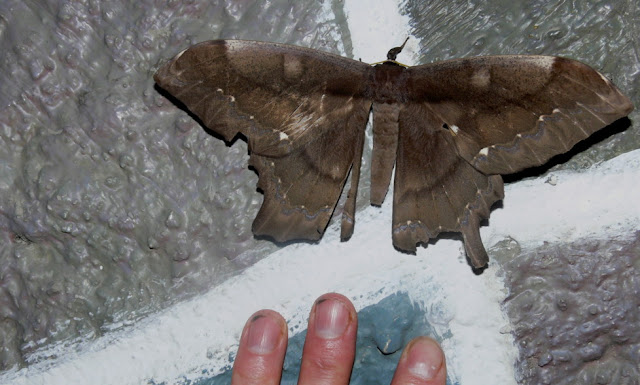 This ragged moth was on the wall of our hotel, which charged $5.oo a night for a decent room. 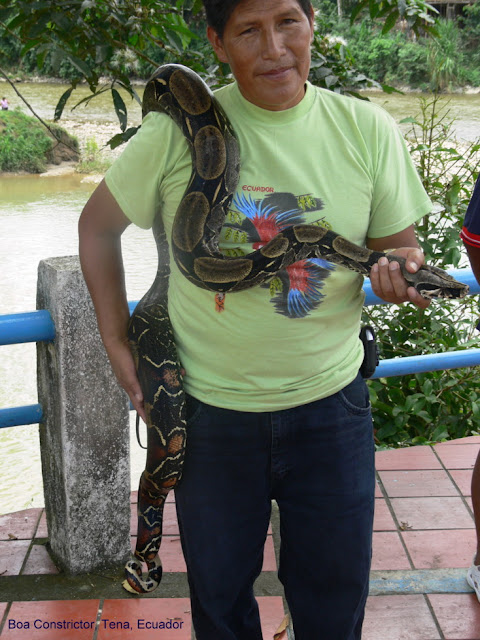 In the larger town of Tena, This local man poses with his Boa Constrictor. 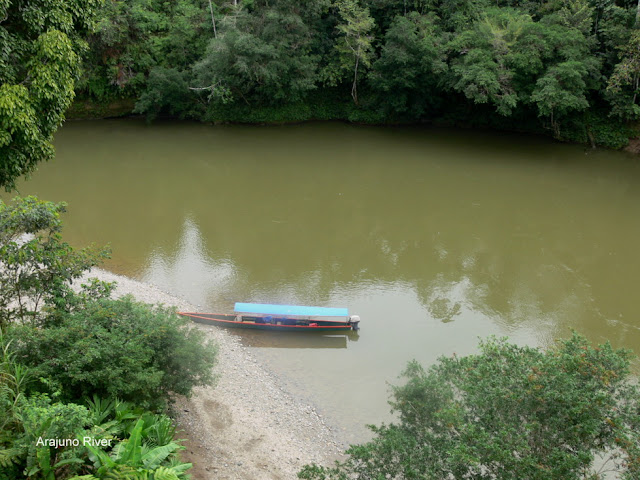 Both Tena and Misahualli lie on the Napo River, which joins the Amazon River in Peru. In Misahualli, we hired a boat and guide for a few days to explore the area. We spent a day on the nearby Arajuno River. 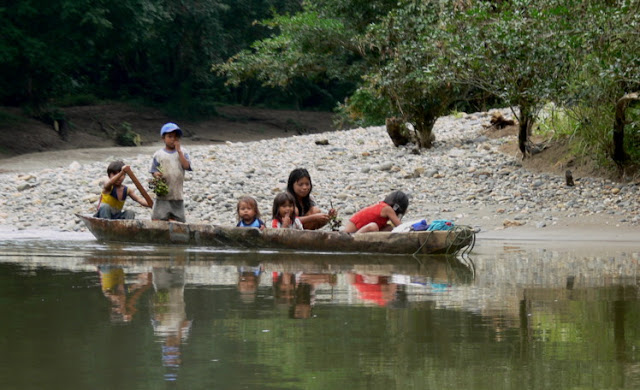 Since there are few roads in the area, people travel mostly by boat. This young woman peels fruit while the kid in back paddles the rickity dugout canoe. 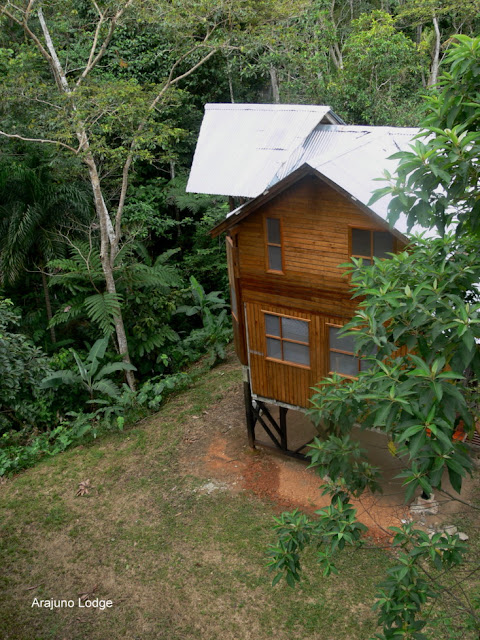 We stopped to visit this remote ecolodge run by an Ex-pat from California. It was a real paradise, built on a private nature reserve, up against a national park. 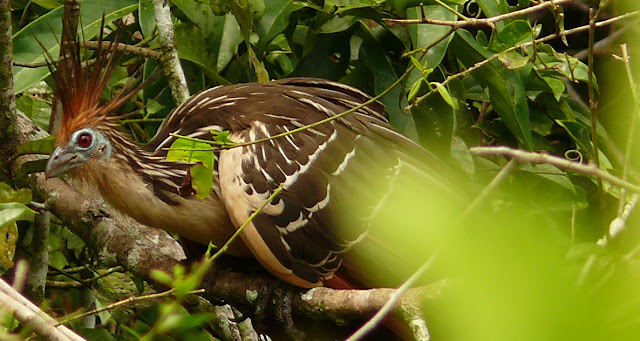 That area was the first place I got to see the incredible dinosaur bird called a Hoatzin, but pronounced watson. The baby Hoatzins actually have claws on their wings which they use to clamber about in the branches of trees. 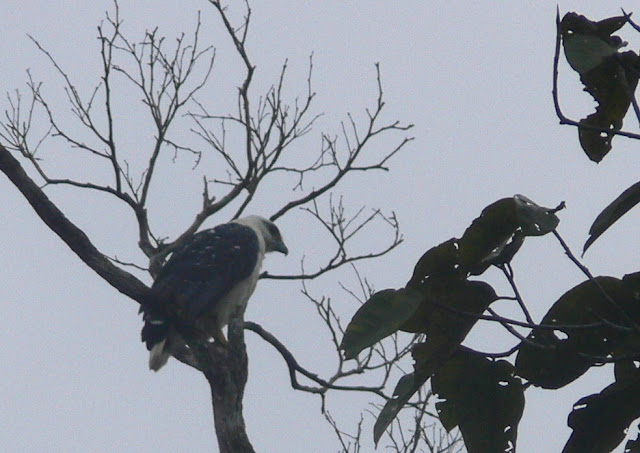 This was my second White Hawk. The first was in Costa Rica. The Costa Rican birds have white backs with only a few black spots on their wings.
Posted by john at 7:05 PM

The patterns on that boa are breath-taking; puts all the pythons I know to shame. I'm also feeling serious envy about the hoatzin!

In my youth I kept both pythons,( Burmese, Reticulated, and Ball Pythons) and Boa Constrictors. I dont know if boas are prettier than pythons, but I know that they are much more intelligent than pythons.
I have had the priveledge of encountering Boa Constrictors in the wild, but so far I have not crossed paths with any wild pythons.