A Great Gray Owl and an Old Bear Story 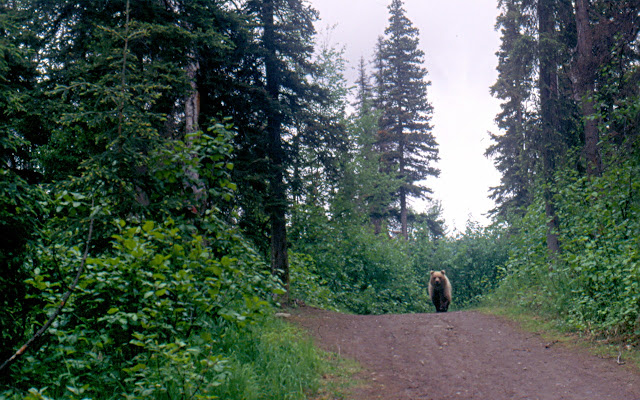 I'll start with the bear story. I'm writing about it now because because I'm bored and too tired to do anything else more ambitious.
Right after I moved to Alaska, two of my Arizona friends, Jody and Richard, came up to visit me in Eagle River. We wanted to do some birding in the area so I called the Rare Bird Hotline to see if there was anything unusual to look for. It reported that a Black-backed Woodpecker nest had been found in Hillside Park in Anchorage. Black-backed Woodpeckers tend to be very difficult to find.
We went to the park and saw a warning sign that a Grizzly Bear had been seen in the park a few days previously. You see signs like this all over the place in the summer months, so I ignored it, thinking the bear had certainly moved on by now.
We walked no more than a hundred yards, (meters) along the main trail when we saw some Varied Thrushes. I was trying to get a good look at them and I heard a huff come from the thick bushes on the opposite side of the trail. I assumed it was a moose, and the thrushes were more interesting to me, so I did'nt even look for the moose.
Jody and Richard were more vigilant and they urgently whispered to me,"Brown Bear". I looked and saw the bear poking it's head out of the bushes only about 25 ft away. Astonishingly the bear walked forward and came right towards us.
We instinctively huddled close together and hurried along the trail as fast as we could walk. The bear followed us, and it occured to me that I had my camera in my knapsack. While we walked I took off the pack and retrieved my camera.
Unfortunately the wide angle lens was on the camera, not the telephoto. I managed three photos, and the photo above is the best of the lot. We met up with five tourists from Oregon, coming up the trail in the opposite direction. We all joined together, and stopped to hold our ground. The bear looked at us like a big puppy that wanted to play. It soon wandered off into the forest. 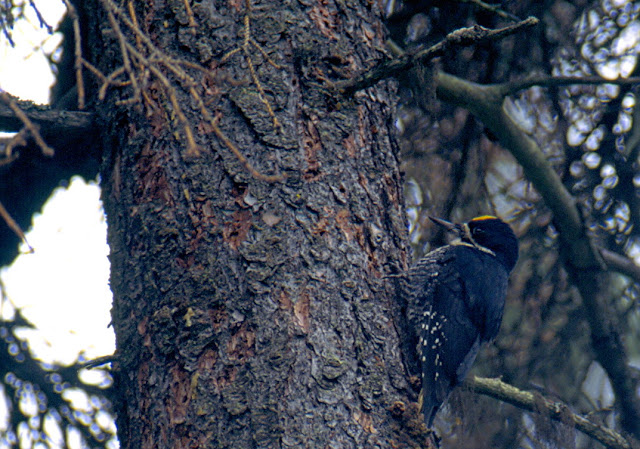 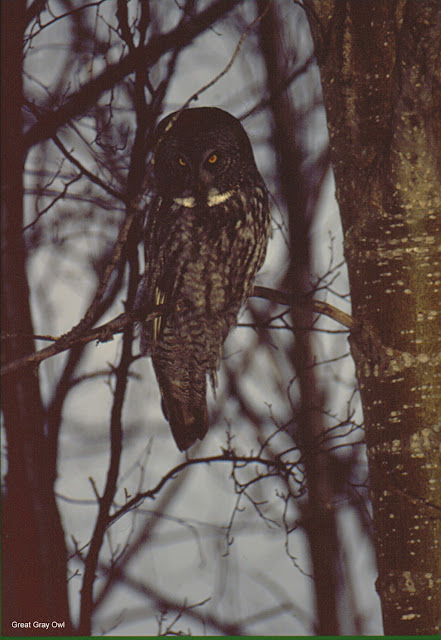 The Great Gray Owl is another old story. During the winter nine or ten years ago I called the local Rare Bird Hotline again. It reported a pair of Great Gray Owls in Earthquake Park in Anchorage. I headed right over there.
It was cold and I searched the area for about two hours, nothing. It was starting to get dark, my face, hands and feet were getting numb, and I had a meeting to get to. As I was leaving the park I ran into another birder that I recognized, so I accompanied him back into the park. In a short time we spotted the bird in the photo above. 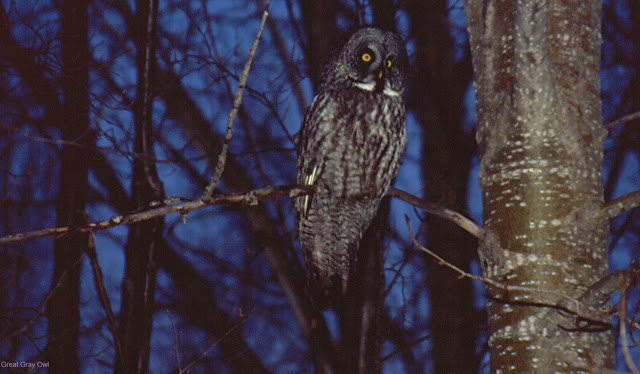 I was shooting with slide film in those days, and the owl was at the limits of my camera's flash capacity. 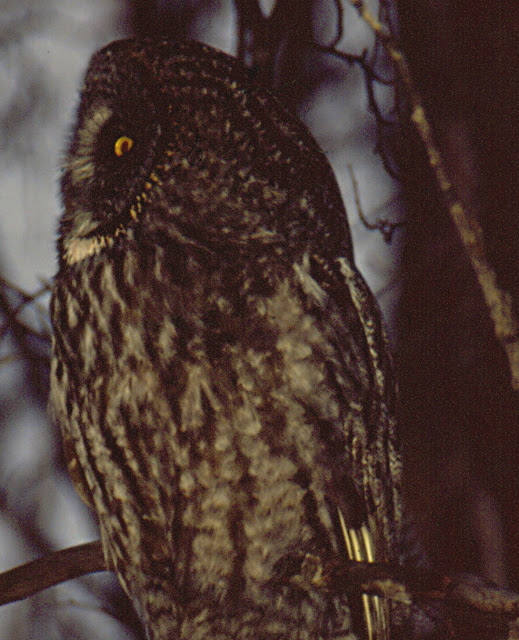 It was truly an impressive sight. A woman about 50 yards away called out that she was looking at the other GG Owl. I thought to myself, "I'm looking at this owl right in front of me, why bother go to look at the other one"? 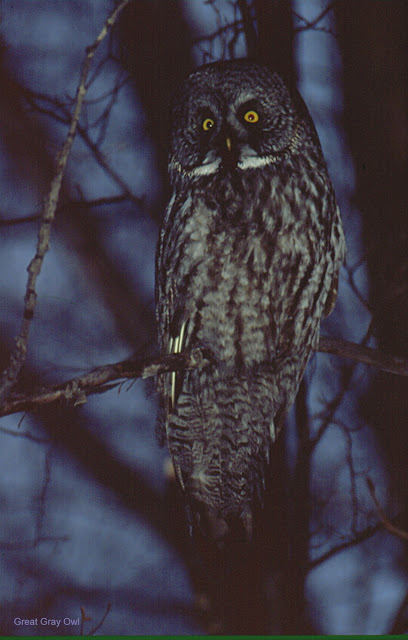 This remains the only Great Gray Owl that I've seen, and I regret that I did'nt go over to see the other owl.
Anyway, I still had time that evening to get some tacos, and make it to the meeting on time.
Posted by john at 11:33 PM

oh I loved these!
I'll never walk there...so thanks for sharing....
With all the grizzly bear attacks lately....I would have freaked out seeing any bear
grizzly stand still
black bear ..run?
do you know if this is so?
that owl....spooky

Suz, the rule about bears is, never run under any circumstanses. Be meek if it's a Grizzly Bear, be loud and threatening if it's a Black Bear.
If the bear attacks, fight the Black Bear, assume a fetal position if it's a Grizzly Bear.
Lots of people around here carry guns or really powerful pepper spray. I carry neither, I just take my chances. Of the dozens of bears I've encountered, none showed any agression.