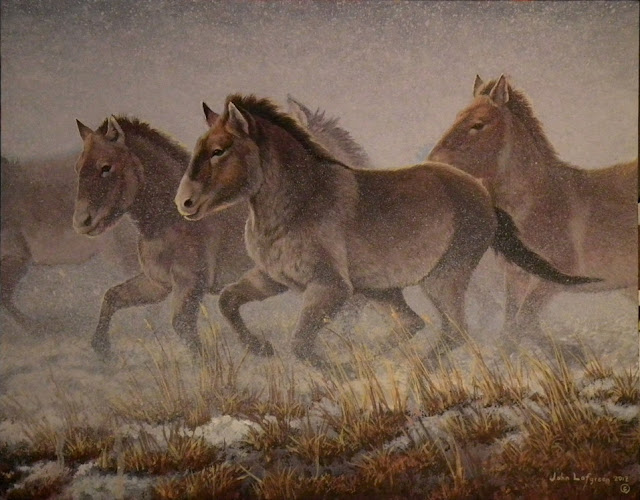 The latest painting, Before the Saddle, 11x14". I started out with the intention of painting wild mustangs in a winter setting. As I got into the search for reference materials, I stumbled into an area of research that I have mostly ignored until now.
The topic of interest for me became the ancestor of the domestic horse. It seems that the predominate thinking is that modern horses are descended from a species of Asiatic wild horse. Things get kind of fuzzy from there.
There is one living species that has resisted domestication,and hangs on by a slim hoofhold. It's called the Przewalski's Horse.They once existed only in captivity, but they have been re-introduced into a few select areas. One interesting place where they seem to be thriving is the Chernobyl, (sp) Exclusion Zone that was created to keep people away from dangerous levels of radiation. The place is now Eastern Europe's greatest wildlife refuge. Besides the horses, European Bison, Moose, Brown Bears, and Wolves are all thriving, along with a slough of other creatures.
This painting is not meant to be Przewalski's Horses per se, but the ancestral horses that were painted on the cave walls in France. I spent a lot of time on this one, because of a paucity of reference materials. I had to guess at various details.

Since it's a short post, I shot a few photos of late afternoon out my back window. The weather is still well below zero in spite of the sunshine.

The roofs of the trailers look a lot better when they are covered with snow. 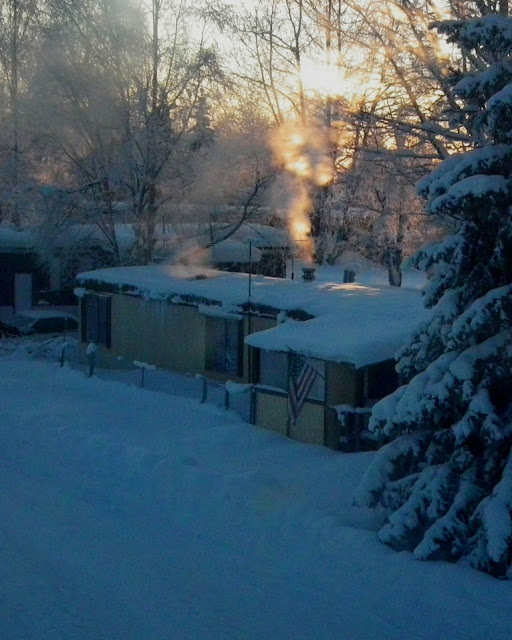 It is not smoke rising from chimneys, it's warm exhaust from natural gas heaters. 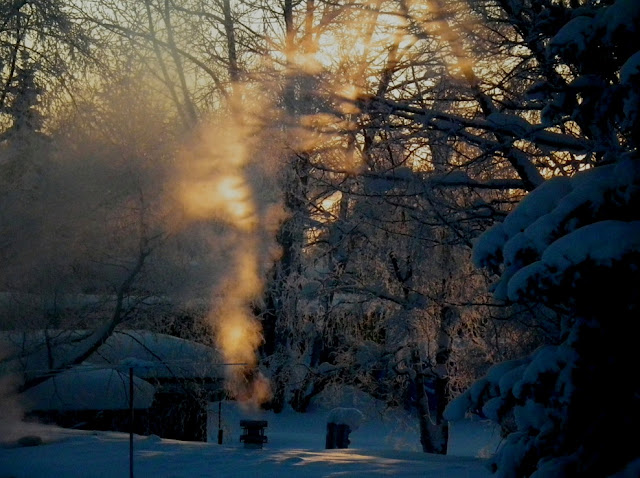 I'm sure that I could have gotten better photos if I went outdoors, but I hate having to bundle up for five minutes just to go outside. I went out into the cold for lunch already today. I'm even skipping the Audubon meeting that I usually love to attend. Winter is GETTING OLD.

The last light. Now the frost spirits reign supreme for another night.
Posted by john at 8:08 PM