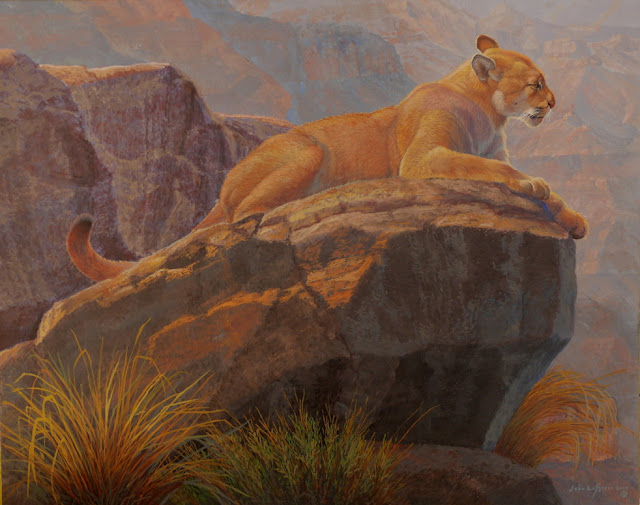 Way back in the dawn of time, or at least back in 2009, I painted this 16x20" Cougar. It is set in the Salt River Canyon of Arizona. That gives the painting it's title, Salt River. I liked it well enough, but there were a few nagging problems with it that I could not quite pin down. 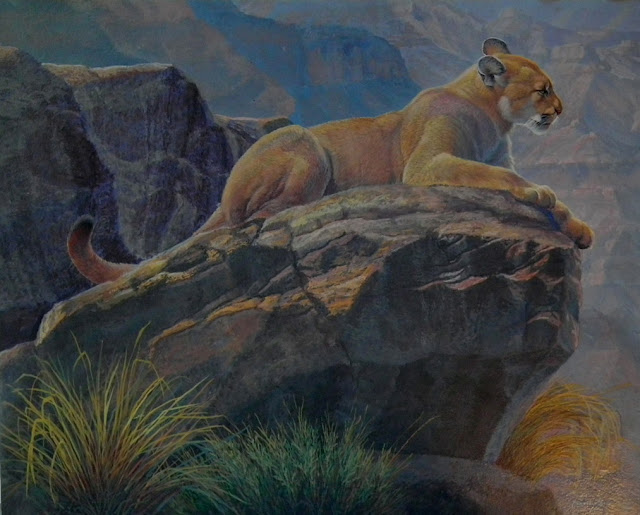 Yesterday I was faced with the task of starting a whole new painting. It being Monday morning, I was feeling less than ambitious. So I pulled out a handful of old, unsold stuff, ( I never even displayed this one anywhere) to see if I could make some simple improvements. Most of the differences apparent in this version, are due to the quality of the photographs, rather than any extensive changes.
Mostly I just repainted it's haunch, and increased the size of it's ears. I also made minor adjustments to the rock that the Cougar is resting on.

A detail of the original version. 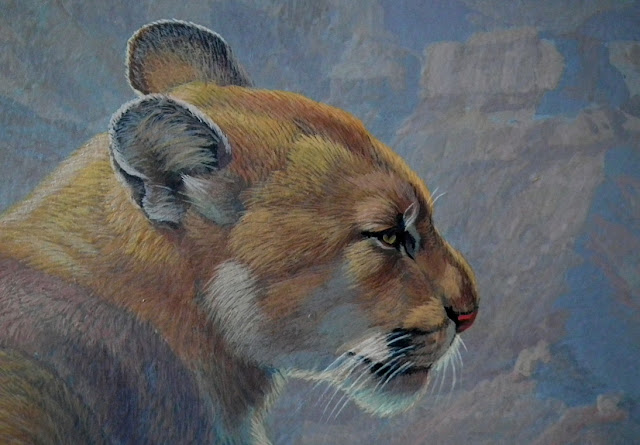 The new and improved version. To me, these few alterations make a dramatic improvement to the painting. I only spent about an hour or so re-working it. 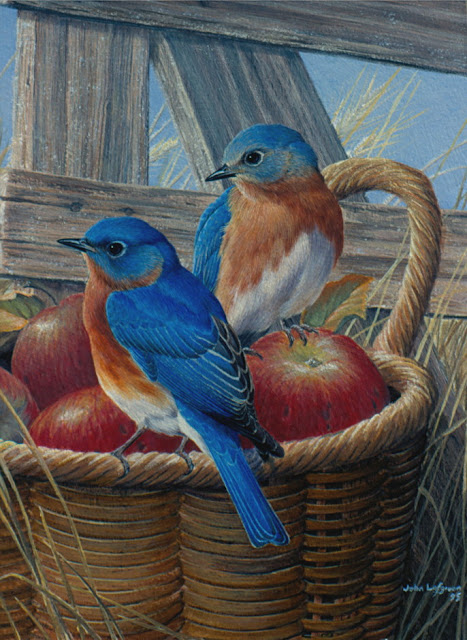 Back in AZ. I was asked to paint a pair of Eastern Bluebirds with a basket of apples as a possible design for collector's plates, ( remember those things?). It was 10x10" It never got used for plates. Oh well, I sold it anyway. 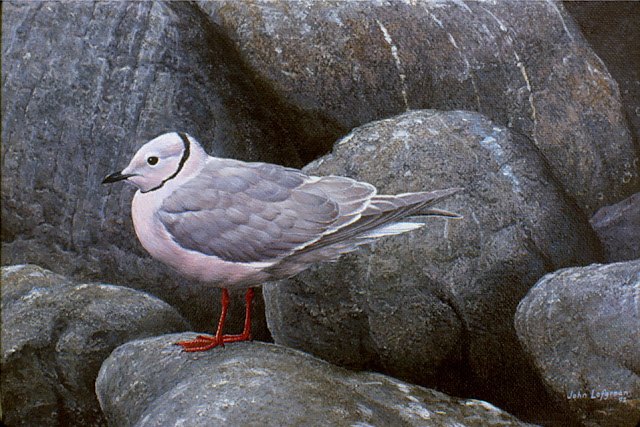 Another one from the Arizona days, a Ross's Gull. I may have posted this one earlier. I believe that it is 8x10". 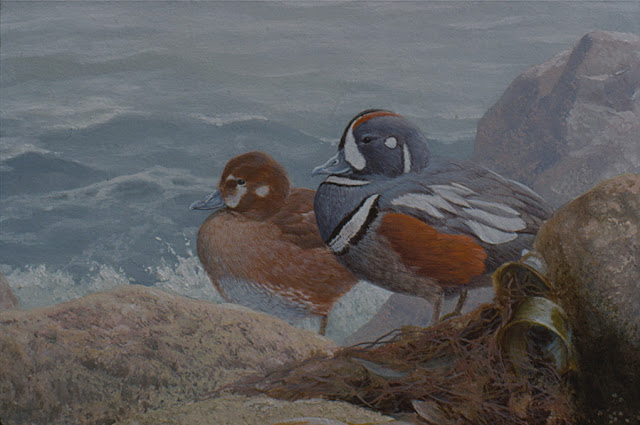 The same goes for this Harlequin Duck painting. 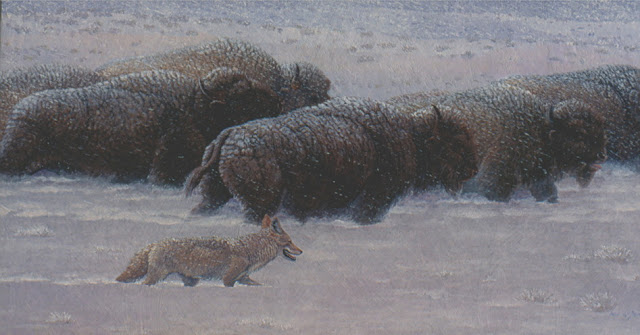 Also this 15x30"painting. When I finished this painting in the early or mid 1990's, I felt that I had accomplished all that I could have hoped for in a painting. However, the definitions, and boundaries of what constitutes a perfect painting keep changing. So I keep trying in vain to paint the perfect painting. 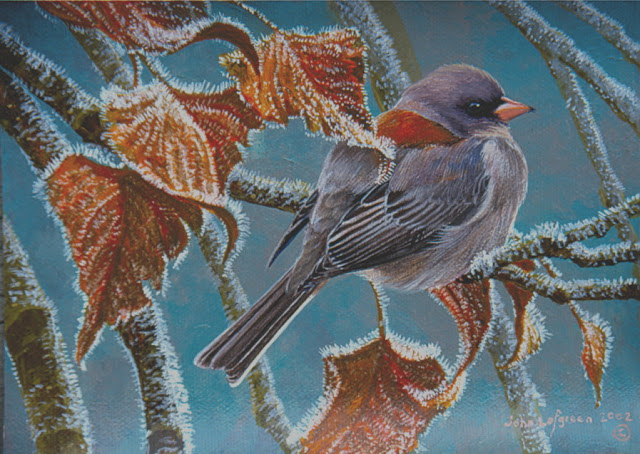 The common junco in AZ. is the Gray-headed Junco. It is a form of the super-species, Dark-eyed Junco. They were the only form of junco that remained year round in the White Mountains. The others, Oregon, Slate-colored, and Pink-sided juncos were present only during the winter months. They are known in AZ as Snowbirds. This little study was either 5x7", or 4x6". 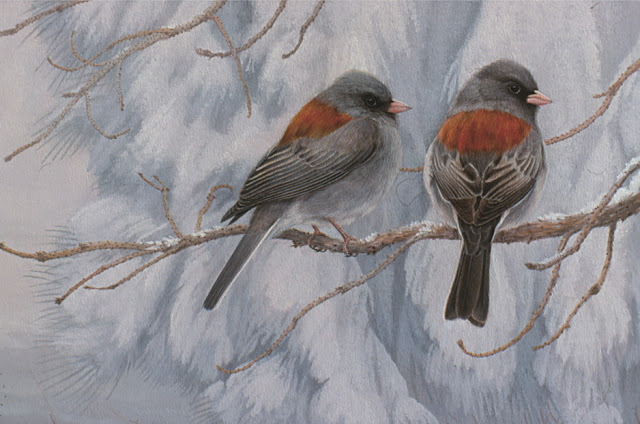 This scene was inspired by the view out of my dining room window in Lakeside. A colloquial name for these guys is, Saddlebacks. 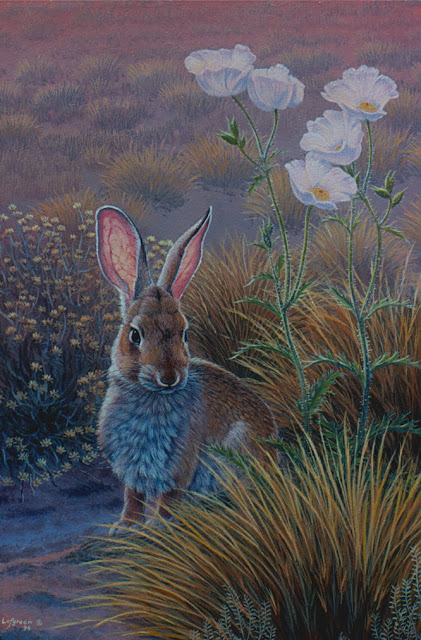 Desert Poppies bloom in the late summer. I have long wanted to incorporate them into a painting. This old painting is my only attempt so far. I could certainly improve on the composition if I ever get around to doing it. I think it has potential to be a great painting. The rabbit is a Desert Cottontail. 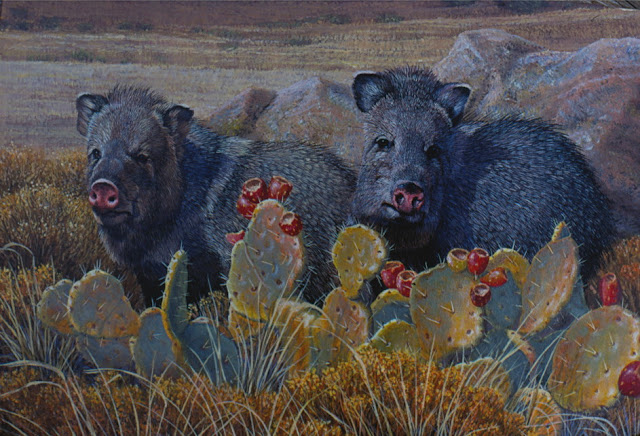 I know that I have posted a photo of this painting before. In the Southwest they are known as Javelina, everywhere else, they are known as Collared Peccaries. They are also known for their ferocity when cornered.
In the Salt River Canyon, a friend of mine and myself saw a group of them walking down a very steep trail. We decided to follow them, big mistake. They went into a copse of small trees and stopped. We stood on the trail looking down at them when we heard ominous sounds coming from behind us.
It was another group of Javelina trying to join up with the first group. They were snorting, grunting, and clacking their sharp tusks at us. The slope was almost a sheer cliff and we could not step off the trail. Slowly they inched closer and closer. Then they rushed past us within inches. They could easily have pushed us off the cliff, but never even touched us. What a thrill. I no longer fear them.
Posted by john at 7:19 PM

Wow, beautiful paintings! Love everyone of them !