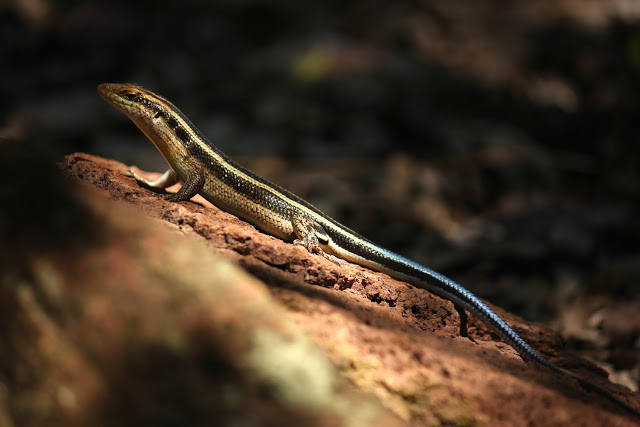 Okay, the really dangerous animals are coming later. Maggie labels this skink as a Blue-tailed Skink. It may be, I would'nt know, but many species of skinks sport blue tails. Typically the really young skinks have neon blue tails that fade as the lizard ages. Many older adults lack any trace of blue on their tails. Some whiptails and other lizards also have bright blue tails. 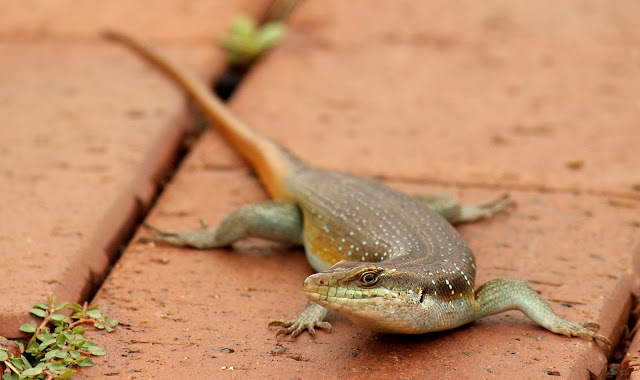 Another species of skink. I believe that this is called a Rainbow Skink. Instead of a blue tail, this species has an orange tail. 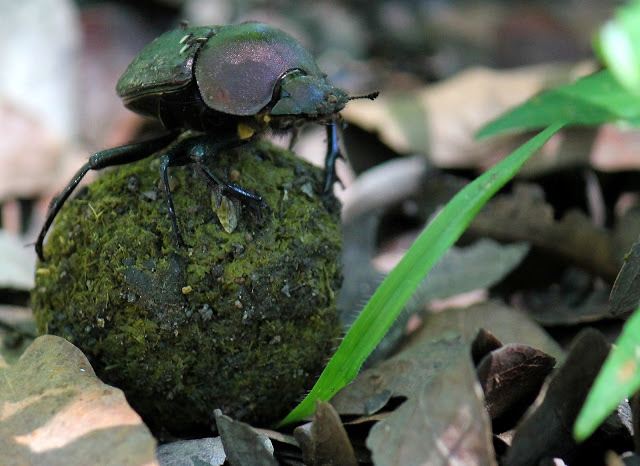 Africa is home to an unusual group of beetles, the infamous dung beetles. This is a great photo of the beetle rolling along, don't you think? 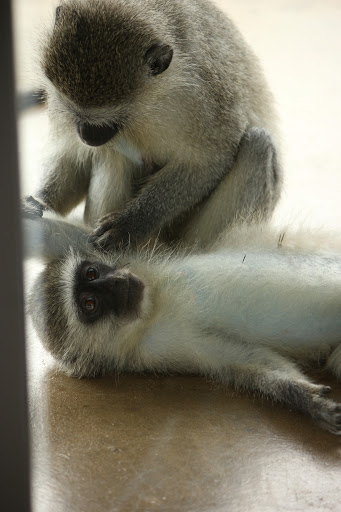 Some locals came to visit Maggie in her bungalow. These Vervet Monkeys are obviously comfortable around people. 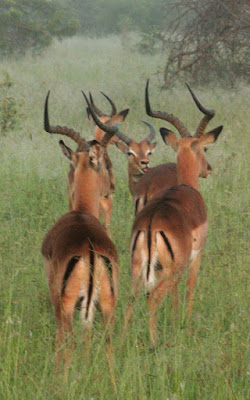 Some very elegant, Impala. They are extremely abundant in the protected areas of South Africa. 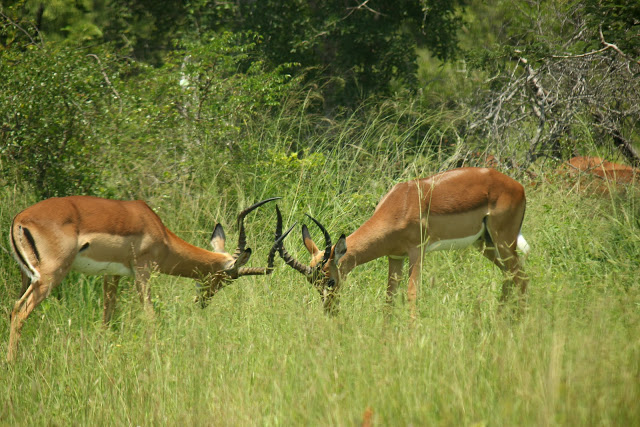 Two male Impala do a bit of jousting. 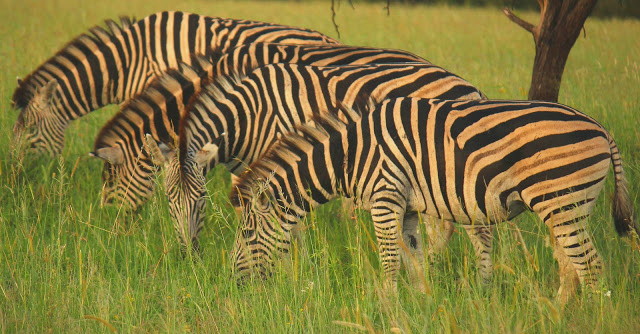 I love the warm light and dramatic patterns of this Zebra photo. 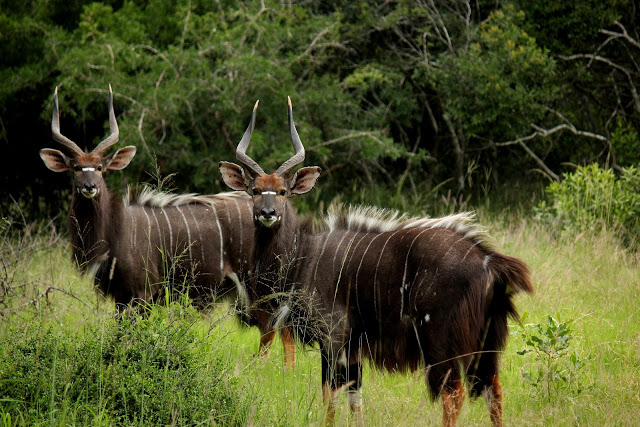 Very impressive animals. These are male, Nyala. Females are very different, and also very beautiful. They are large antelopes. 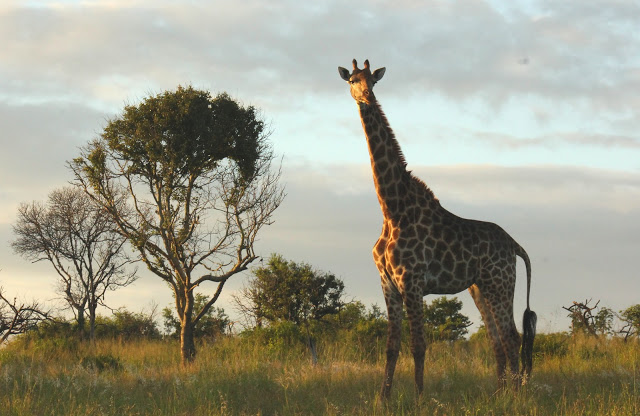 The quintessential African scene. A Giraffe at sunrise. Way cool! 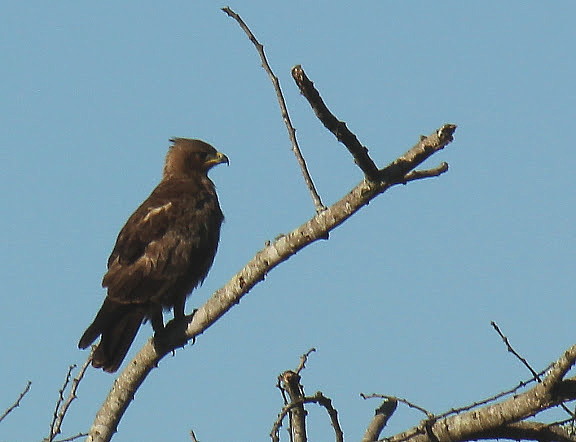 See how big this Black Rhino is in comparison to the truck. Black Rhinos are generally more belligerent than White Rhinos. This one lived up to it's reputation. 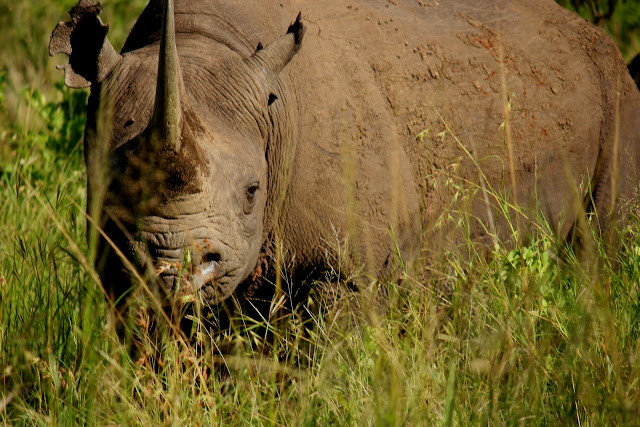 Maggie shot this photo moments before the rhino charged.
More horns, tusks, claws, and teeth to come.
Posted by john at 8:56 PM

John, that dung beetle was the hardest critter I photographed on this trip. That was the only passable photo I got. Those things are fast!

Love them all John! I wish I could capture all those animals to be able to paint them someday. But then, I have quite a collection already so should just really concentrate on those. It boils down though to getting that perfect shot, or not so perfect, but good enough to use for a painting... and the artist is the one who is suppose to make it look more appealing than just a good photo.

The photograph of the vervet monkeys,transmit a pacefull and tenderness feelings.The nyalas antelopes are bery beautyful and they have,an interesting colour combinations,that inspires for paint,just like the kudus,sitatungas,the elands,the bongos and bushbucks.John!,one of the most espectacular and colorfull antelope that i fill is the giant lord Dervy eland from west and central Africa its the biggest antelope of the world and live in a forested sabannas environments and clear forest, principally composed of "agenia" trees especies and Guinea tall grass!.