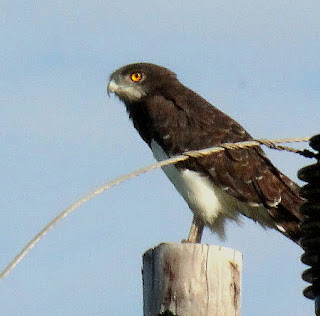 Maggie, Tom, and Gary went to South Africa at the same time. The fact is that Maggie has never met Tom or Gary, and they went to to different parts of the country. I think that Tom and Gary are still there as I write this post.
Tom, Gary, and Gary's brother Doug rented a car and have been visiting national parks like Kruger etc. Maggie on the other hand has been visiting game reserves like Phindi. I'm guessing that her lodging was more luxerious, and her game drives more structured than Gary & company. All I know is that she saw some amazing wildlife, including several things that really made me envious. She got good photos of this Black-chested Snake Eagle above. 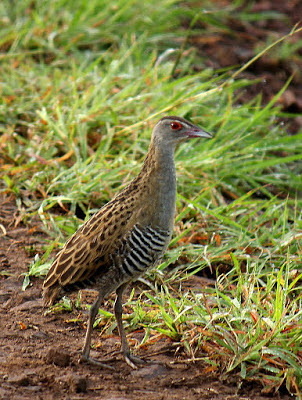 And this great shot of what is usually a shy skulker, African Rail. They normally stay in thick, riparian vegetation. 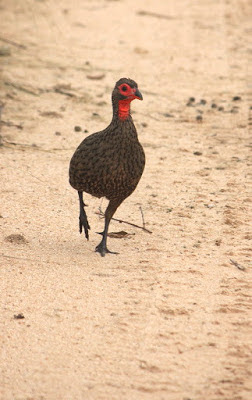 Swainson's Francolins are basically the most common of the many species of South African Francolins, (grouse-like birds). 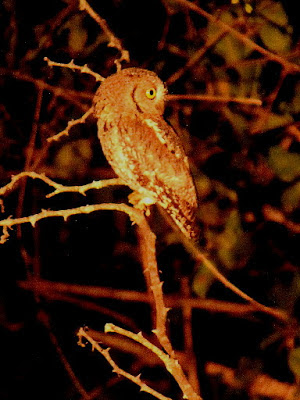 African Scops Owls are the equivalent of North American Screech Owls. Scops, and screech, are different names for the same mega-family of birds, although they tend to be placed into either Otus, or Megascops. There are other taxonomic names for oddball members of the same large family of small owls. 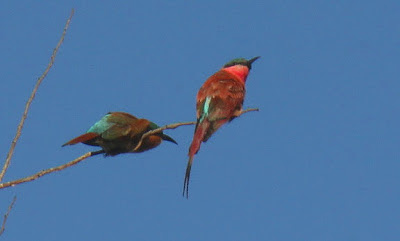 Everyone loves to see Southern Carmine Bee-eaters, especially when they are in prime breeding colors. These birds are a little past their breeding time. Incredibly colorful, nevertheless. 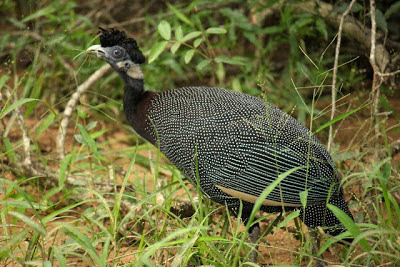 Helmeted Guineafowl have been widely domesticated. However, I have never seen a domestic version of this wild, Crested Guineafowl. They have really cool voices. 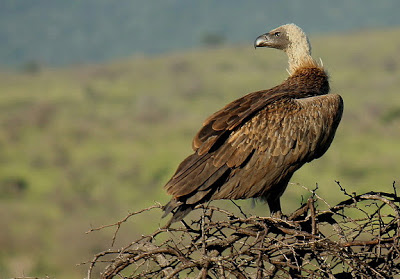 For some reason, Old World vulture populations have been plummeting. It is no longer so easy to see large numbers of vultures, like this White-backed Vulture. I guess that the world is changing too fast for these pre-historic relics to keep up. 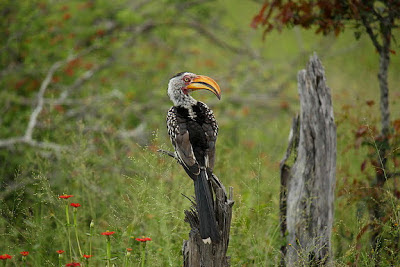 Another pre-historic looking bird, Southern Yellow-billed Hornbills are generally more common than vultures in much of South Africa. 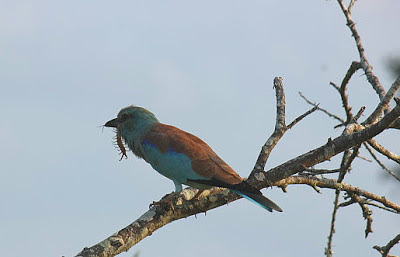 Maggie captured this photo of a European Roller that in turn, just captured a large centipede. I posted a nearly identical photo of the same thing from my own trip to South Africa. 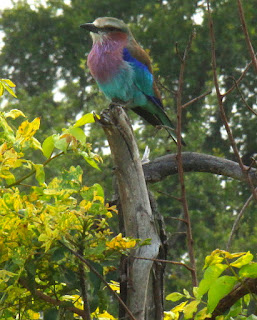 As you may have noticed, all of these photos are African birds. There are still more birds to come, as well as mammals and other stuff. I'll end this post with Maggie's shot of the incredible, Lilac-breasted Roller.
Posted by john at 4:19 PM

I'd love to see the Hornbills one day. They are incredible birds.

By the way, we don't have the Monitor Lizard in HK but I saw several of them in Borneo, Malaysia last year. They were not as scary as I thought though. The local guide told us that if you leave them alone, they will not attack people anyway.