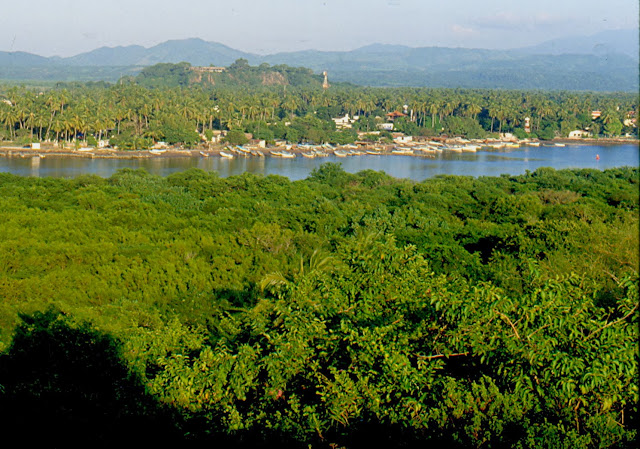 It is Halloween night as I write this post and all the little neighborhood zombies and vampires are taking all of my candy. This puts me in mind of an eerie experience that happened to me in Mexico in the early 1990's.
I used to travel to Mexico once or twice a year through much of the 1980's and 90's. I almost always went to the same place, San Blas, Nayarit. I have posted about it before. It was the closest 'jungle' to my house in Arizona, about 1200 miles to the south.
One day I was in the Arizona-Sonora Desert Museum in Tucson. I got to talking to a curator about the museum's collection of living bats. He mentioned that the museum got its Vampire Bats from San Blas because that was the location of the northernmost known colony of Vampire Bats. I asked him for directions to the entrance of the bat cave, and he told me that it was at the base of the cliffs at the edge of town. 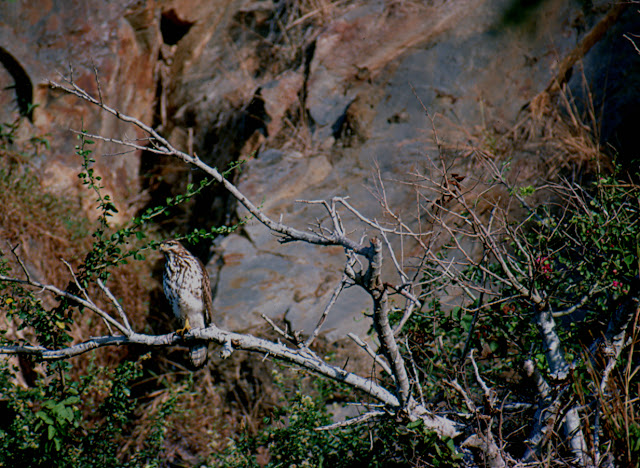 The very next time that I was in San Blas I decided to look for it one afternoon. On the way through the outskirts of town I passed through a gate that had one word painted on it; Tinieblas. That means outer darkness in Spanish. What an odd thing to put on a gate I thought.
As I drew nearer to the base of the cliffs I saw this imm. Gray Hawk above. 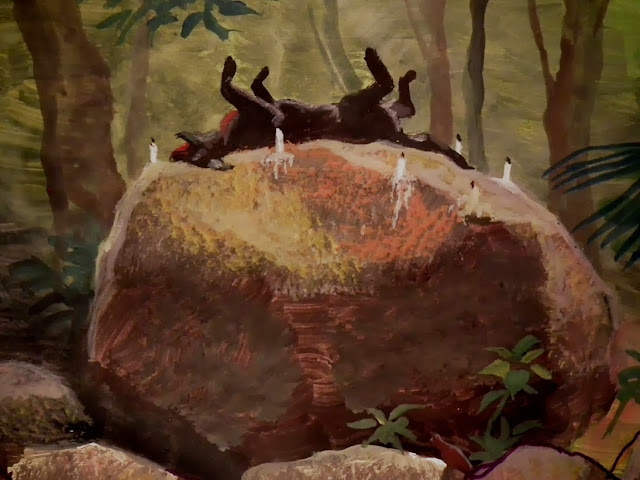 Soon I entered into a copse of trees and saw this macabre sight. Someone had obviously sacrificed this large black dog on top of a boulder. There were extinguished candles and other cultic symbolism all around. What twisted degenerates did a thing like this?  Santa Muerte? I definitely had a major case of the creeps at this point. ( I did not photograph it so I made this quick illustration for this post.) 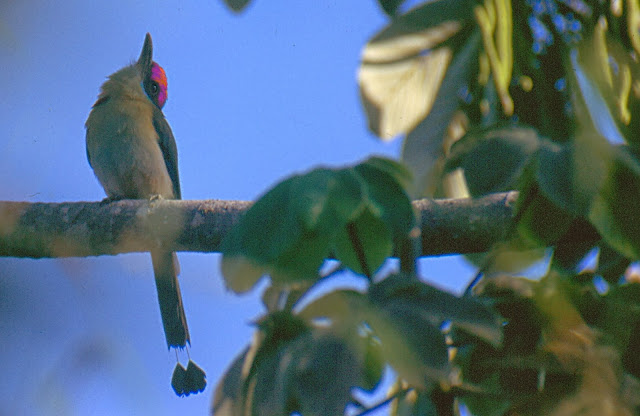 Quickly I skirted around the unhallowed altar and approached the cliffs from another angle. Soon I got to see one of my most sought after birds from that part of Mexico, Russet-crowned Mot mot.  It was absolutely the best bird of the trip. 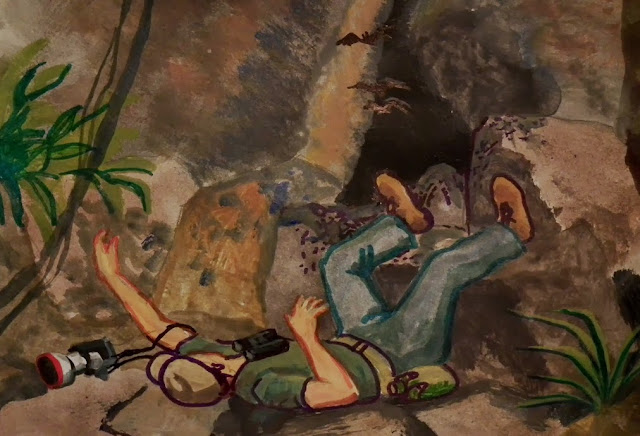 After some searching I came to an opening in the face of the cliff. It was at the top of a pile of rocks which had sloughed off of the cliffs. I climbed to the top of the pile and noticed a coating of slimy black goo all around the entrance to the small opening.
Then three things happened at once; I noticed a very large Mexican Swallowtail Butterfly that caught my attention. Then I was hit by a wave of putrid odor so I took a step back. The boulder I was standing on shifted under my feet and I toppled over backward. I hit my head on a jagged rock several feet below the boulder, HARD.
It knocked me senseless. I do not think that I was completely unconscious because I could still hear bird calls in the distance. I just could not move. My head was in serious pain. All I could do was lay there helpless.
By this time it was becoming late afternoon and I knew that dusk falls quickly in the tropics.
The bats would be emerging soon and there I was, a veritable banquet for them. No bats landed and bit me and eventually I sat up to assess the damage. Little blood, no broken bones. My expensive telephoto lens had a crack on the side but it still worked.
Slowly I made my way back to my hotel and was very sore for the rest of the trip.

Yikes and I though crashing and burning on my bike this summer was bad. Actually you lucked out....:)

Today still there are a people that make atrocities on the name of his beliefs,for example you know in many villages of south east Asia that make a ritual sacrifices with a wather bufaloes beating his body with a machete,just like show the famous film "Apocalipse now".Or in Spain and many countries of Sout America with his infamous bull fighting feasts.

Troutbirder,
Thank you for your comment. I too have had some nasty bike crashes this summer, most caused by reckless, (thoughtless) drivers.
Marc,
I have very mixed feelings about animal sacrifice. On the one hand it is clearly cruel, primitive, and barbaric. On the other hand I believe that freedom of religion is a basic human right. Where do you draw the line between what is permissible and what is not? Who gets to decide? I have no answers.

Interesting comments John, I too feel that perhaps we should not judge, who knows what is right and what is wrong. And perhaps in time, this kind of thing will slowly pass away. On a lighter note, glad that you made it safely back without any more incidents. I really like the accompanying sketches that so cleverly illustrate the scene.