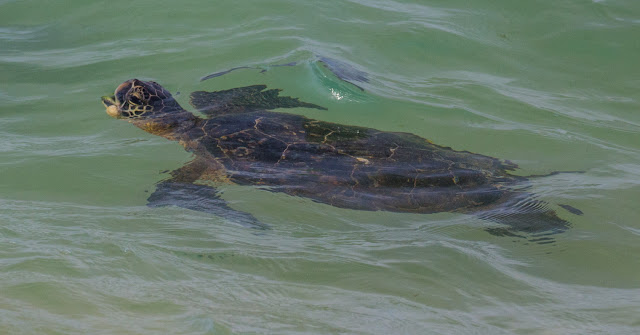 While Bart was in Hawaii he got to see some of the sea turtles that nest on the island. Since receiving protection the sea turtle population has recovered enough that sea turtles are a common sight in places.

They often arrive onto nesting beaches en masse and overwhelm egg predators with their sheer numbers.

I confess to having eaten sea turtle meat on two occasions way back in the 1970's in Mexico. It was delicious. I only feel a little bit guilty. 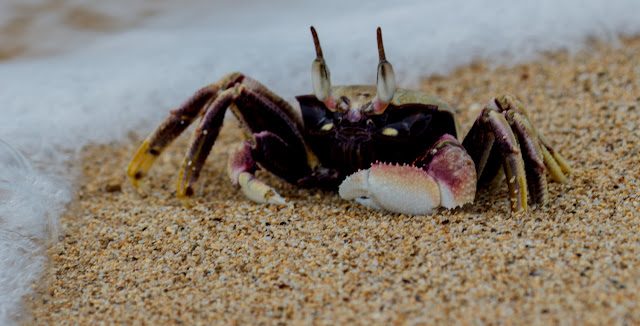 Is this guy big enough to prey upon a turtle egg or hatchling? 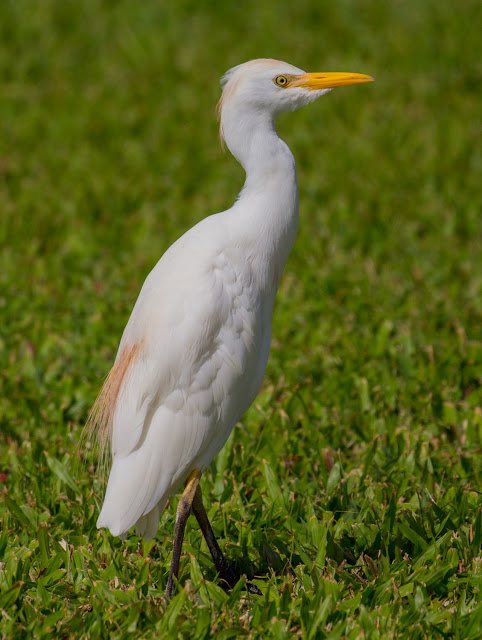 A fine portrait of a Cattle Egret. 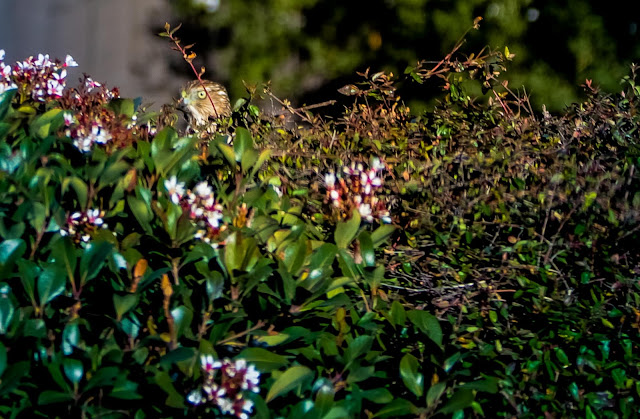 Meanwhile back in Nipomo, California a sinister head popped up over the hedge in my friend Don's backyard. 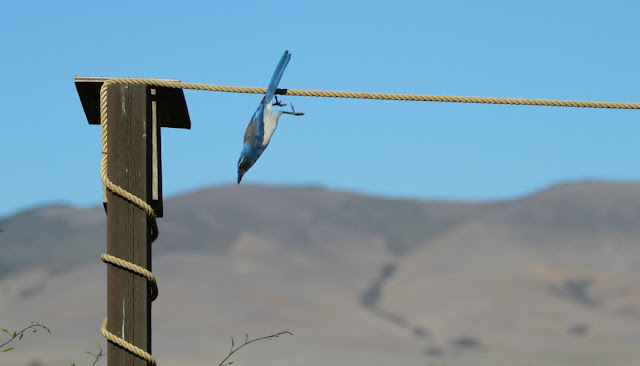 The local song birds, like this Scrub Jay beat a hasty retreat. 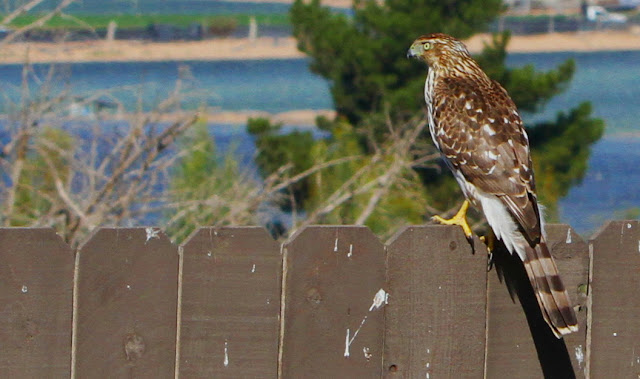 This immature Cooper's Hawk is a regular visitor to Don's property. It is the scourge of the local birds. 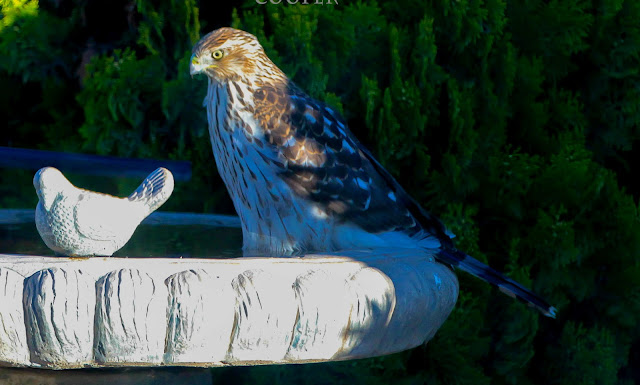 The young accipitor has not yet learned that sitting in the bird bath is an ineffective spot for ambushing small birds. Maybe it thinks that the ceramic bird could be a tasty lunch. 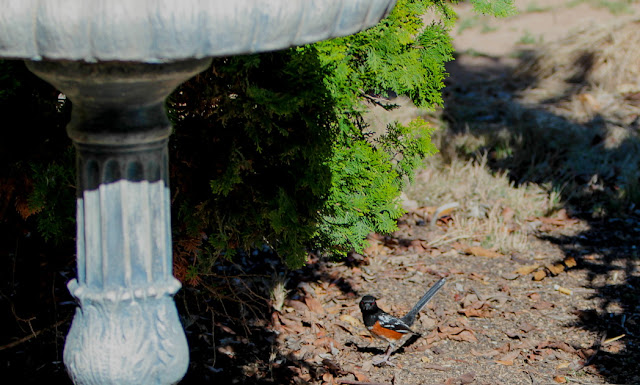 While the Cooper's Hawk hogged the top of the bird bath a Spotted Towhee quietly searched for seeds underneath. 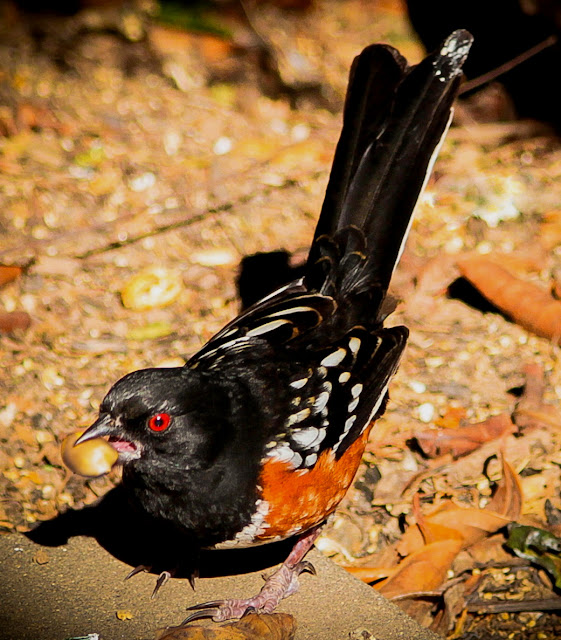 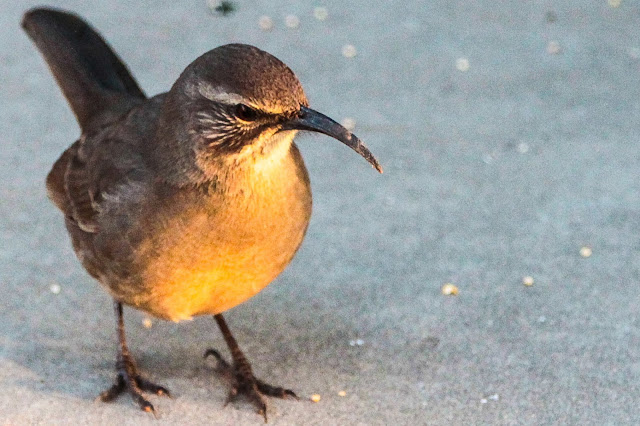 Another local bird that prefers to forage on the ground is the California Thrasher.
All of the birds in this post are old friends of mine from way back and I miss seeing them since they do not make it up to Alaska.
There is more to come from Nipomo.
Posted by john at 12:41 PM

Hello John after much time of absence i turn to came, to write in the blogs.Beautiful bird photos of Nipomo birds,¡i never imagine that the thrasher can achieve Alaska!.

My most beautiful is the painted bunting I see in Florida...:)

Painted Buntings are almost too vibrant to be real. I have only seen them in Mexico, where they outshine the incredible, Indigo, Varied, and Orange-breasted Buntings which share the same wintering grounds.
Nevertheless my vote for the most beautiful of all birds goes to the Painted Redstart. Not only colorful but possessing hypnotic movement worthy of the most graceful ballerina.