In Resurrection Bay last Saturday, we saw many seabirds well offshore. I guess we all could have piled into a boat to get closer to them, but nobody had organized a boat ride. The photo above shows some of the closest birds. Most of them were out of photo range.
There were mostly Surf Scoters, also White-winged, and Black  Scoters, Harlequin, and Long-tailed Ducks. All three North American Merganser species, one Greater Scaup, some Marbled Murrelets, Pelagic Cormorants, and lots of Common Murres. 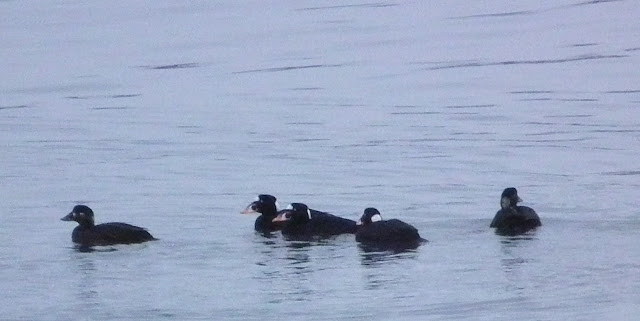 Eventually, some things drifted in closer to shore, like these are Surf Scoters. 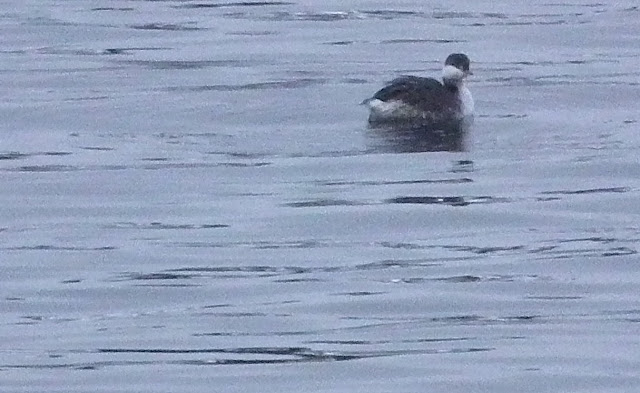 There were also a couple of Horned Grebes in winter plummage. 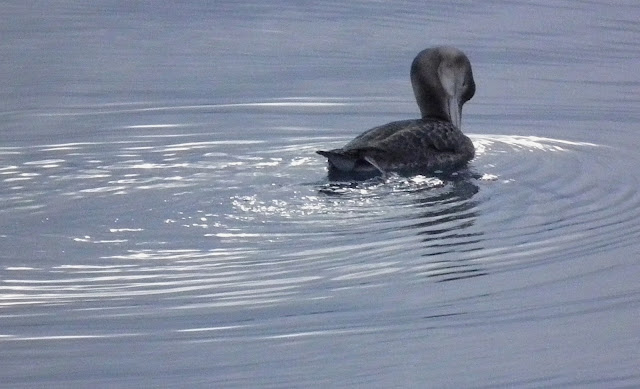 We saw three species of loon, Common, Pacific, and my first lifer of 2012, Yellow-billed Loon. 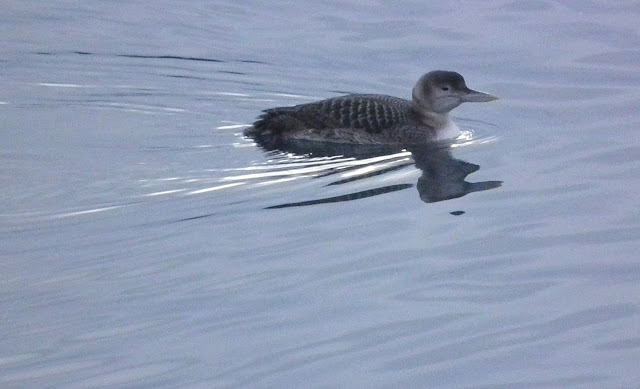 This bird is in winter plummage. The Yellow-billed Loon is the largest loon species. It nests in a few largish bodies of water on the north slope. It is very sensitive to human disturbance, and is considered to be a vulnerable species.

There were a few Common Goldeneyes, like the male in the photo above, and more Barrow's Goldeneyes. The gulls are Glaucous-winged Gulls. There were also Mew, and Herring Gulls, and a Black-legged Kittiwake. 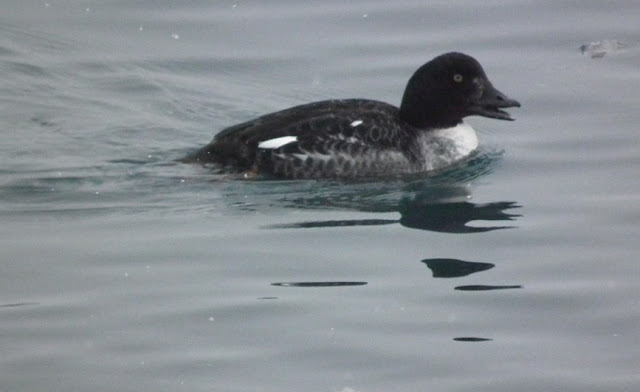 A female Common Goldeneye came in closer to us than the males. For some reason, this tameness is typical of many female ducks. 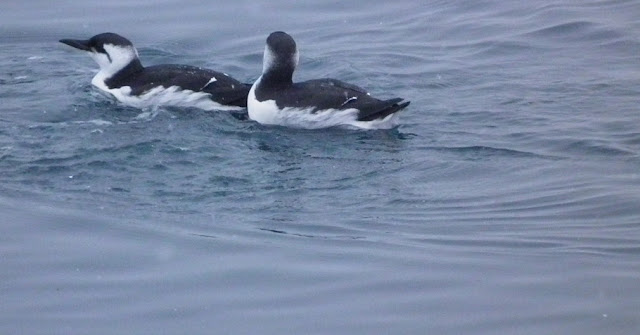 These are some Common Murres. They breed in great numbers and occasionally have large die-offs when fish numbers drop. This year is a big die-off year for murres in Resurrection Bay. The local Bald Eagles are having a windfall of easy prey. It all seems to be part of some natural cycle in the far north. 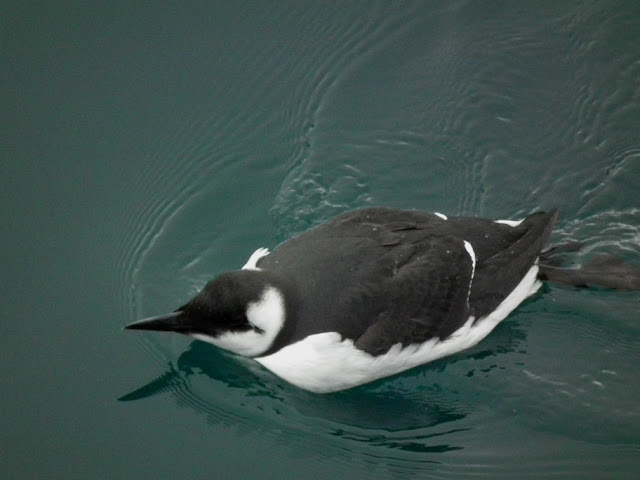 A couple of the Common Murres came to check us out when the Sea Otter was visiting us. I imagine that they were hoping for some food as well. I would have tried to get hold of a bucket of chum, and fish parts if I would have thought about it in time. We could have brought in all those birds as close as this murre. 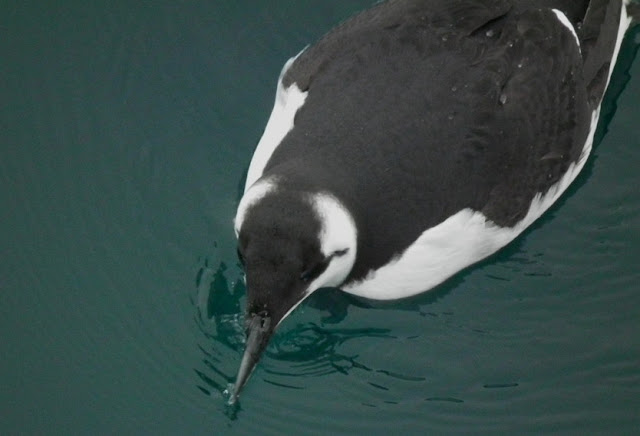 I think this guy did find some small morsel to eat. I can only hope that this one makes it through the winter. I could not believe how close to shore this bird came. They usually remain well offshore. 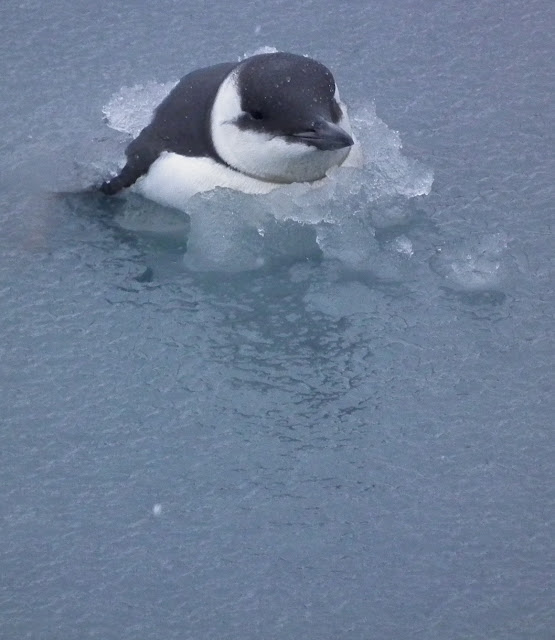 Much of Seward's boat harbor was frozen over. I was incredibly fortunate to get photos of this Common Murre breaking up through the ice. I was so close, what a shot. 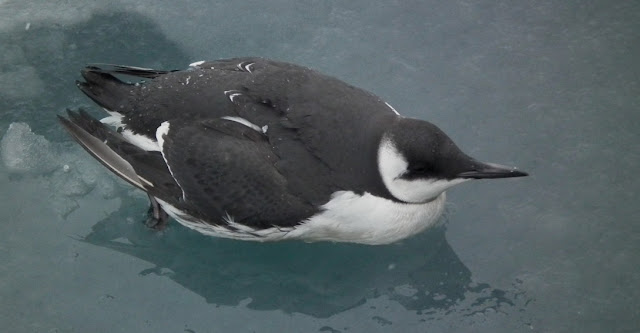 The murre plopped out onto the ice to rest. It was very vulnerable to the local Bald Eagle that hangs out in the harbor. The eagle did'nt pounce, probably because it was already completely satiated on murre meat.
Next post will be about some of the great land birds that we saw in Seward, including my second lifer of the year.
Posted by john at 5:50 PM

Sounds like you had a great birding trip and that Yellow-billed Loon - wow, what a bird! I have only ever seen one and that was an imm off the coast of China (HK) - would love to see and adult! Great photos by the way!