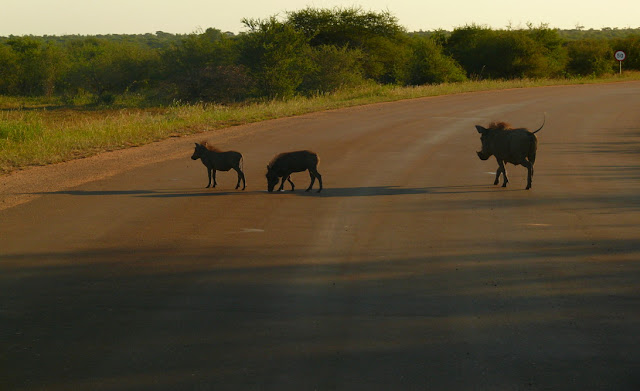 By and large, Kruger National Park has really good roads. The local wildlife seems to like the roads as well. They often block the road and dont feel the need to move out of the way of vehicles. Kruger NP enforces slow speed limits to avoid road kill. 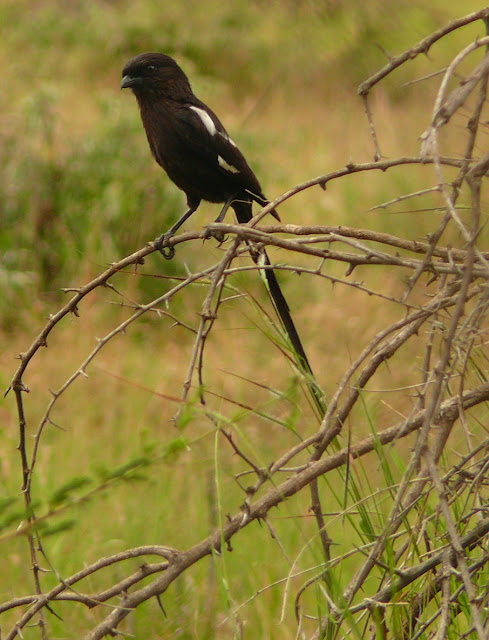 To quote from my trip journal, "In the late morning, Tom and I drove back to Letaba Rest Camp. On the way there we saw some Long-tailed, (Magpie) Shrikes. One of them allowed me to take a few decent photos". 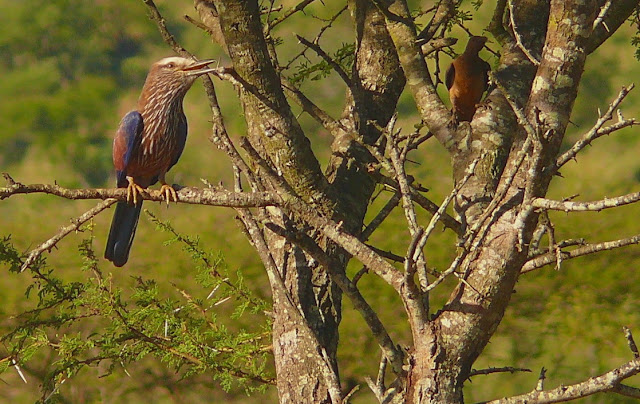 "Our next bird was a Rufous-crowned, (Purple) Roller. Very impressive, our fourth species of roller for the trip". Note the other bird in the photo. I never knew it was there at the time I shot this photo. I'm not sure what it is. 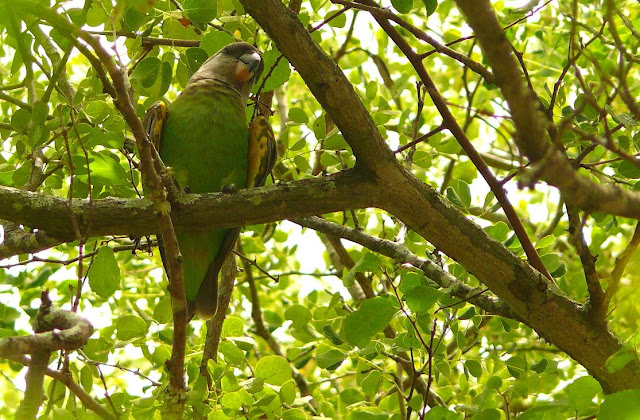 "We had to return to the rest camp in order to book another night's lodging. While we were there we saw a man looking up into a tree over the parking lot. We looked too, and saw a Brown-headed Parrot, about 8" in length. It was alone and sat quietly. It had a two-toned beak, dark on top, and yellow on the lower half"
It turned out to be the only species of parrot that we saw in South Africa. 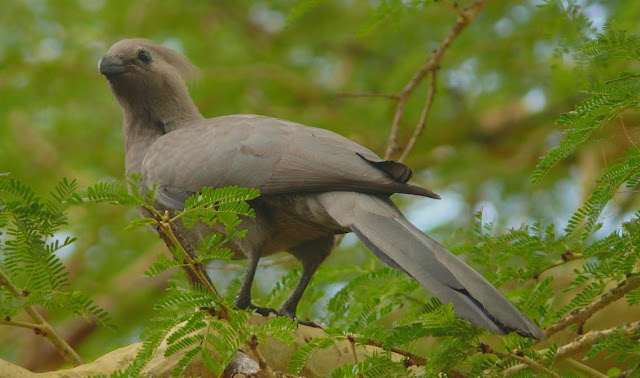 "In the back of the rest camp, there was a small water feature that attracted many birds. One of the first birds I photographed was a Grey Go-away Bird....." 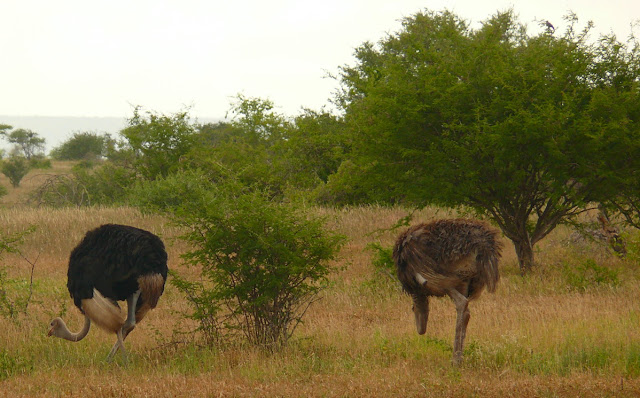 "Out of the rest camp, we saw some more Ostriches, and lots of Zebras and Wildebeests". 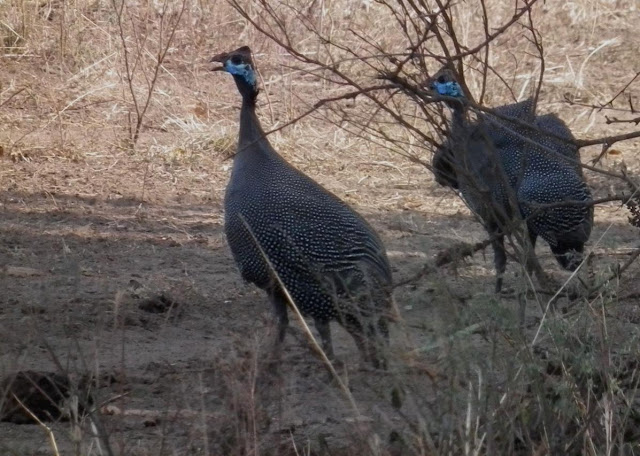 "An abundant bird that we saw daily, were the sometimes noisy, Helmeted Guineafowl". 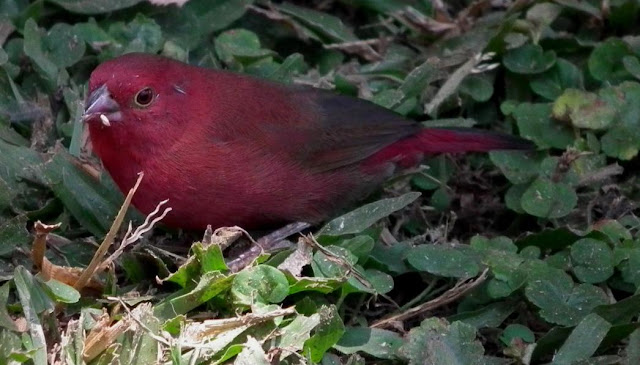 "Some African Firefinches allowed me to get very close. I concentrated on the more colorful male". 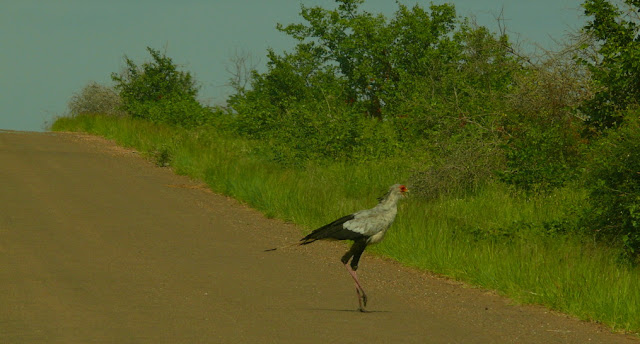 "Further on, there was another raptor. We saw a Secretary Bird crossing the road. It was panting in the heat. These strange raptors are uncommon, with declining populations in most places". 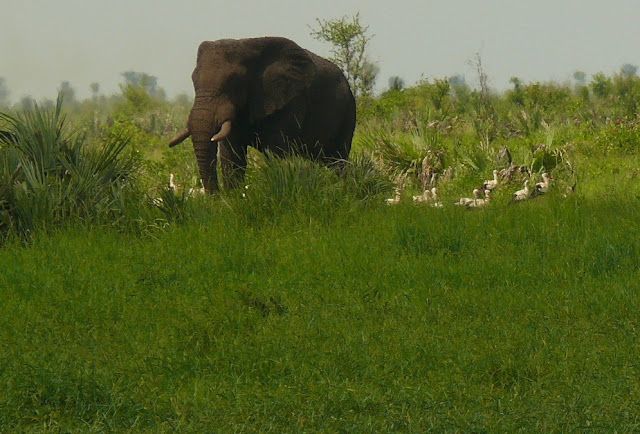 'Today was brutally hot. We drove across some wide open spaces with no shade for miles. Eventually we came to a spot with a windmill that pumped water into an upper, and lower tank.
The runoff water formed a small marsh where we saw at least fifty White storks down in the rank vegetation. Soon we noticed an elephant coming to the upper tank. It walked through the middle of the flock. The storks moved aside but did not fly.
I was a little nervous because we were away from the car, but the large elephant only wanted water, and ignored us." 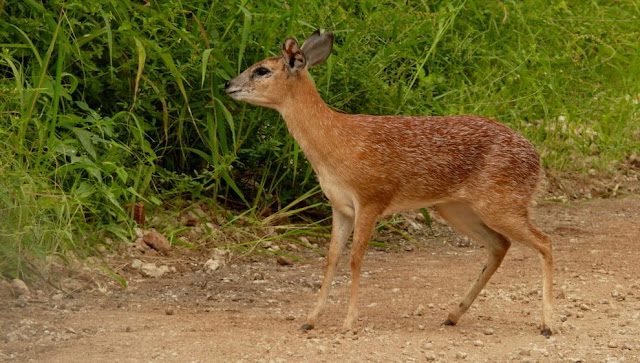 "Just past the forested hillside, there was a side road leading up to the adjacent ridge. We drove up the road and soon came upon a tiny antelope at the side of the road. It was about 14" tall, and stood it's ground. Tom said it was a Sharpe's Grysbok. I want one. It let me get some photos at least, then took off".
HAPPY LEAP DAY EVERYONE.
Posted by john at 5:09 PM

Interesting photographs of Kruguer's wildlife,especially the grysbock and the purple roller,i have one of eurasian roller on the nest in my blog.And lastly i still control the riverine route of a male wild boar,for launching several photographs.Regards!.

Thank you for your comments. I love your photo of a European Roller at it's nest tree, and the caution about keeping a respectful distance.