Sitka Blacktail and the Oracle 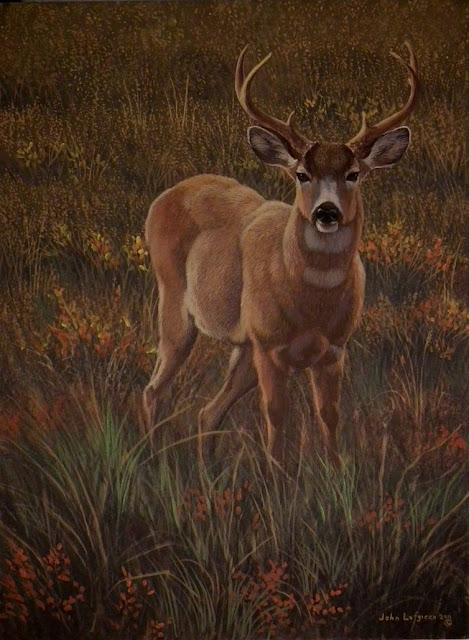 My latest painting, Sitka Blacktail, 12x9. Sitka Black-tailed Deer are native to Southeast Alaska, and have been introduced to Kodiak Island. They are a small species of deer, and tend to have small antlers. This painting would be considered a large buck. I wanted to capture the look of late afternoon, after the sun has set. 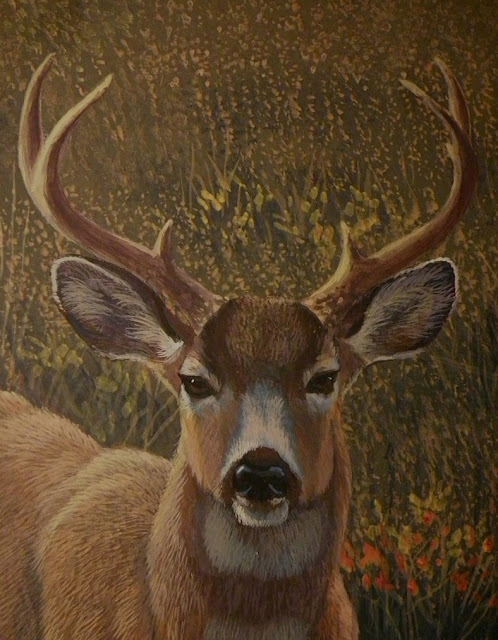 a detail of the head.

Since this is a short post, I'll flesh it out with a brief history lession. My last post was about the Nasca Lines in the Western desert of Peru. There are many archeological sites throughout the barren deserts all along the west coast of Peru.
The principle site in southern Peru is called Pachacamac, about 30 miles south of Lima. It was first occupied about 200 AD, or CE, as they call it now. It was built by the Cuismancu Empire that preceded the Inca Empire by more than a millenium.
Pachacamac is a Huaca, or God, of fire and earthquakes. Huaca is also the generic term for pyramid. The structure above is the huaca, or temple of the sun.

Another complex of eroded buildings shot from the temple of the sun. There are a number of buildings scattered around Pachacamac, and more within Lima's city limits. I cant help but wonder what it all looked like in it's heyday.

Another part of the temple of the sun. I was informed that various parts of human sacrifices were placed inside the alcoves on the right of the photo. I have some skepticism about that.
Way back when the Spanish Conquistadores first arrived in Peru, they first went to Cajamarca, and captured the Inca leader, Atahualpa. Before they held him for ransom, and later murdered him, they questioned him about where all the gold was. Atahualpa told them that Pachacamac was the center of worship for all of South America.
It was the location of the powerful oracle of Pachacamac. The oracle was a thick, wooden staff, carved to look like the Huaca, Pachacamac. It was ancient even back then. Inca priests would consult the oracle for guidance about many issues. I think that maybe Atahualpa hoped that if Pizarro and his men went to Pachacamac in search of gold, the oracle would destroy them.
Pizarro sent a contingent of men to investigate. They were dissapointed by the paltry amount of gold, so they destroyed the place out of habit. Somehow the oracle survived, and now stands in the small museum at Pachacamac. It is not much to look at. 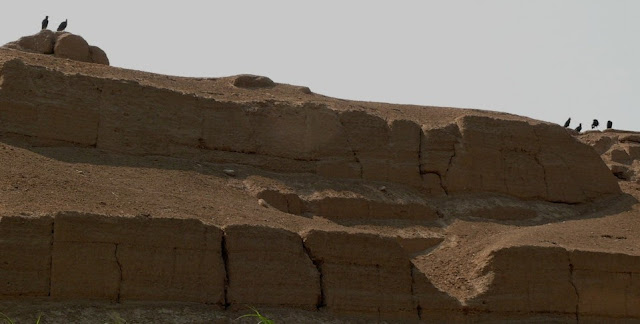 Some Black Vultures keep vigil over a huaca in Lima. 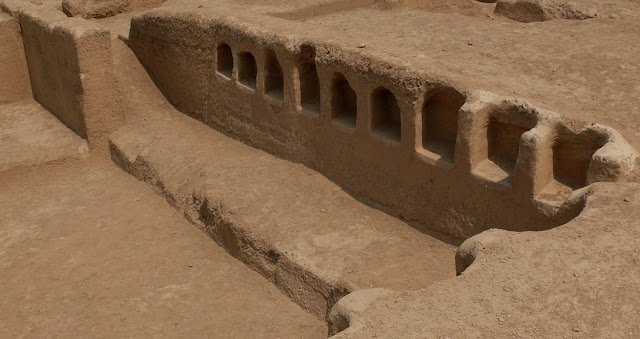 Some alcoves in the wall of a structure in Lima. I imagine they were used for storage. 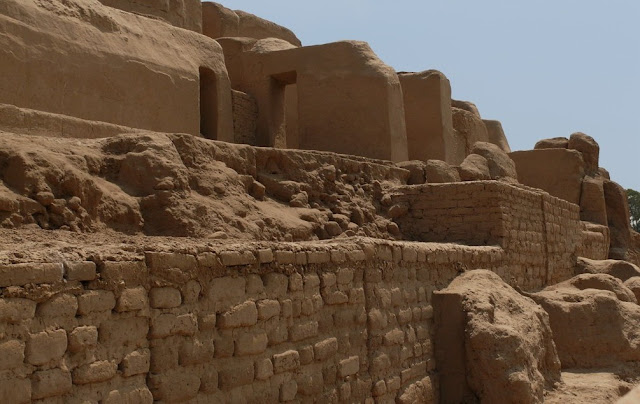 Some places are better preserved than others. They were built at different times by different cultures. 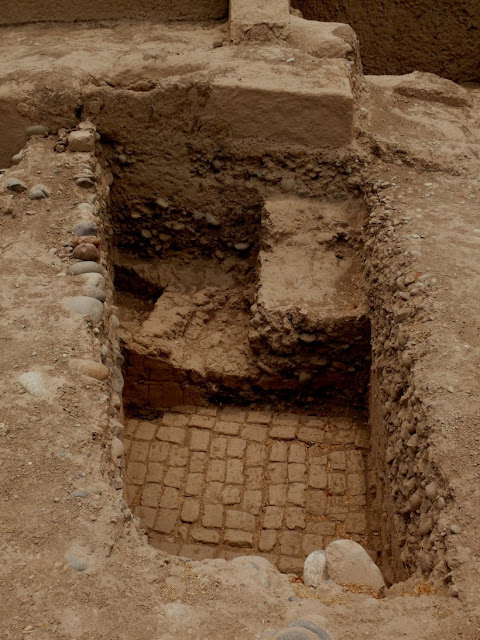 I dont know what I'm looking at, but it's kind of interesting. Is it a living space? Or for water or food storage?

A nice geometric pattern typical of the region. 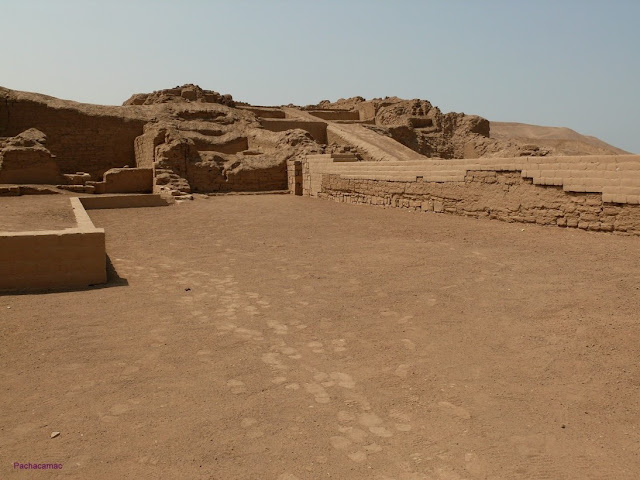 This is one of the most important buildings at Pachacamac. I guess it had ceremonial significance. 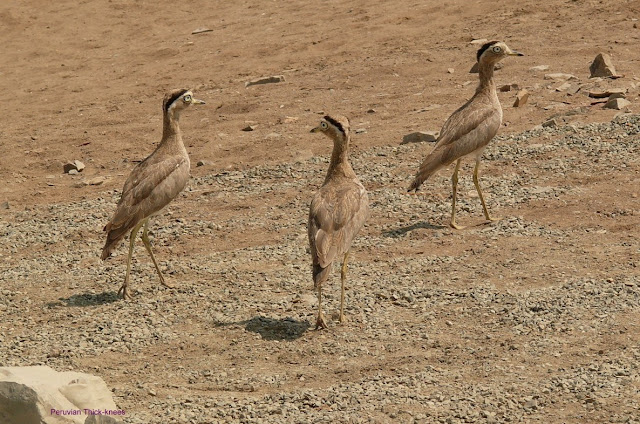 These are Peruvian Thick-knees. A large, nocturnal species of shorebird that often lives far from water. I know that I have posted about all this before, but I'm trying to use different photos than the first time around. These birds somehow eke out a living in desert that is so barren, there are virtually no plants outside the watered valleys..

I know that I have not posted this particular photo of a Saffron Finch in Lima, next to a huaca.

The race of Blue-black Grassquits in western Peru look quite a bit different than other forms of the same species. This male was on a lawn near the Saffron Finch.
Posted by john at 4:02 PM

Nice deer study John! Thanks for posting the other pics too, it's always interesting seeing other parts of the world and the birdlife found in those areas.