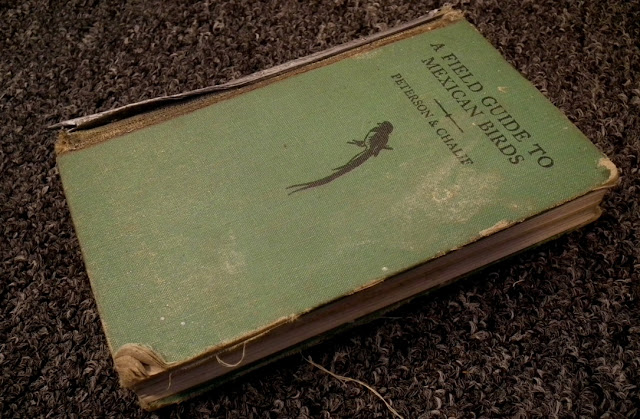 Way back in 1977, I was serving as a missionary in a hellhole in the jungles of Nayarit, Mexico called Santiago Ixcuintla. I hated the town, but loved the jungle. There were many wild parrots and flashy birds like Magpie Jays and Kiskadees. I was very curious to know the names of these birds .

A few months later I was in Guadalajara where I found the above book in a bookstore. This is now one of my prized possessions. As you can see it has seen some use over the years. 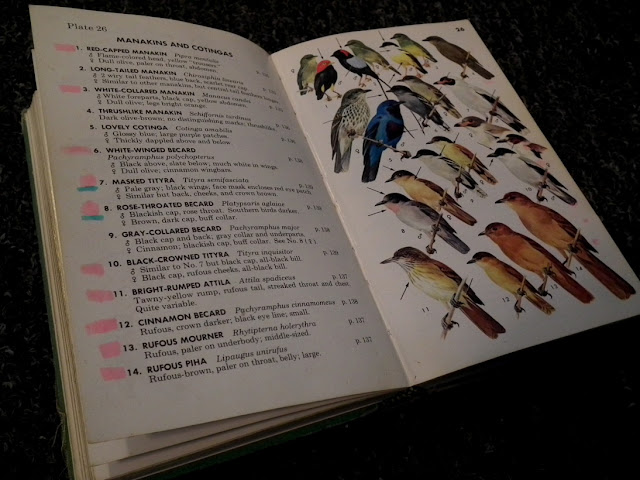 At first I was overwhelmed by the myriad of similar-looking birds that were depicted in the book. I only paid attention to the most colorful, or distinctive birds in the book.
The idea of going out birdwatching was preposterous to me. I did'nt even own a pair of binoculars. I did start becoming familiar with the birds that I saw often like Groove-billed Anis and Great-tailed Grackles.
When my mission was over and I moved to Lakeside, Arizona I stumbled into another bookstore and purchased the Peterson Field Guide to the Birds of Western North America. I borrowed my father's binoculars and went down to the local lake to sort out the various species of ducks.
After I figured them out I moved on to other bird families like woodpeckers and raptors. One day it occured to me to try and figure out all of the bird species that I was seeing. I bought a pair of binoculars of my own and although I did'nt even know it at the time, I was now a birder.
That old field guide fell apart many years ago. Now I have a newer version, autographed by Roger Tory himself. 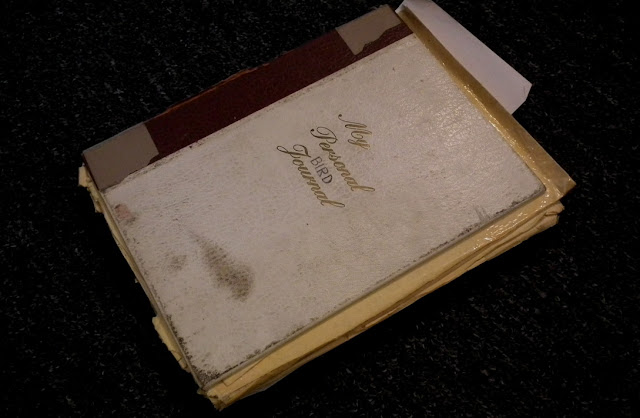 I was a serious birder for seven or eight years before I crossed paths with another birder. That came about when a friend of mine showed me an article about an upcoming Audubon Christmas Bird Count she had found in the newspaper. I contacted them and joined in the bird count. What a surprize it was to me to find other birders living in the area.
My father often talked about the novel he was going to write when he retired. Upon his retirement, my sister bought him a journal to write in. When my father died I came across this journal amoung his belongings. He had not written one word. 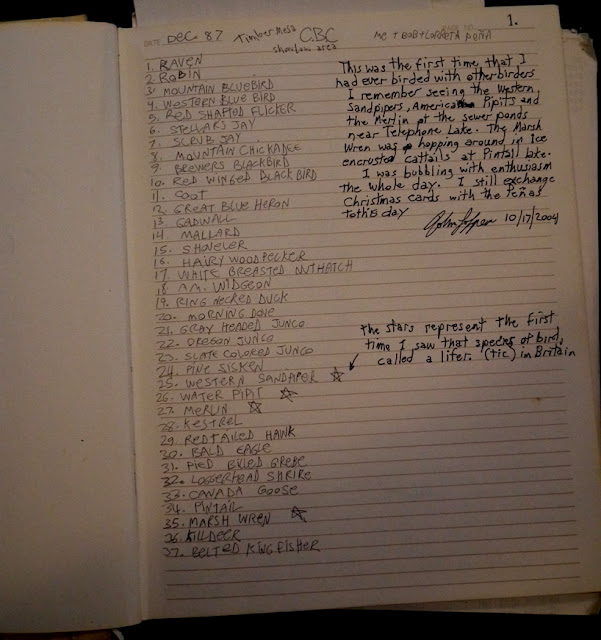 The Audubon society stressed the importance of keeping records of bird sightings. I decided that using my father's old journal would be a good way to keep track of what I was seeing. December 1987 was when I participated in my first Christmas Bird Count, the Timber Mesa Circle. I was assigned to a team consisting of myself, and Bob and Lorreta Pena. We were told to cover the area all around the nearby town of Show Low, where my brother still lives.
You can see the list of what we saw above. We counted individuals of each species as well. In 2004 I went back and tried to flesh out some of the details. 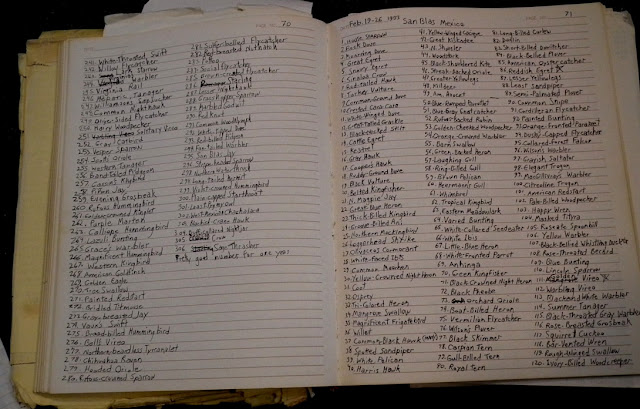 Back in those days I was very active and enthusiastic about listing what birds I was seeing. Unfortunately I did'nt bother making other pertinent notes like behavior, habitat, weather conditions, sexes, age etc. 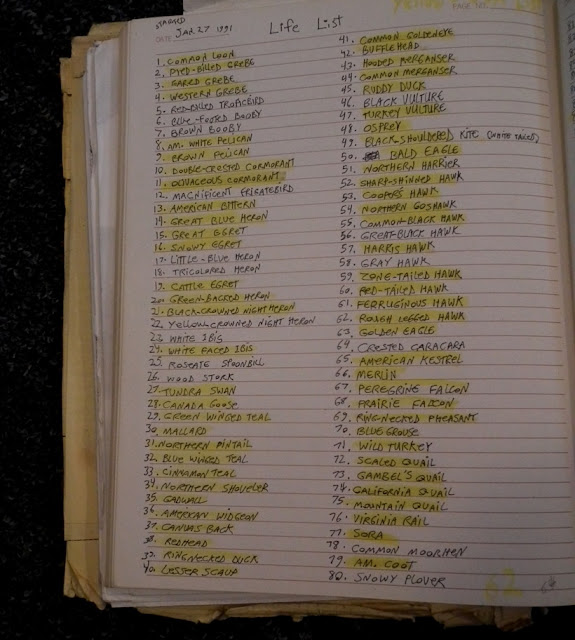 Eventually I learned that many birders kept a tally of all the birds they had seen called a life list. I started mine in January of 1991. The birds marked in yellow are the birds I saw in the United States. 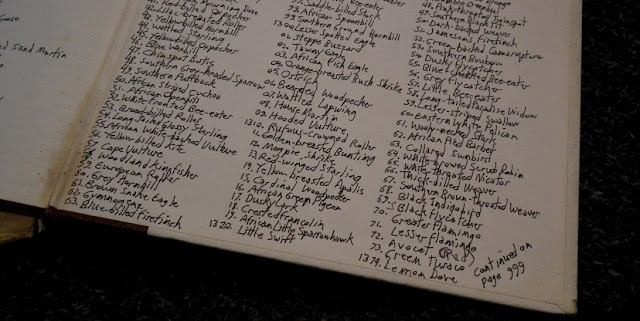 By the time I went to South Africa last year, my life list filled up the journal even onto the back cover. I've run out of room to add more birds. What a tradgedy it would be if something were to happen to this book.
Along comes eBIRD to the rescue. A week ago I attended the Matsu Bird Club's monthly meeting where eBIRD was the topic of the main program. I thought it was going to be a very dull topic but was in for a big surprize.
eBIRD, http://www.ebird.org/, is basically a warehousing of all bird knowledge. They gather results from CBC's, Breeding Bird Surveys, Government and University research etc. One of the most important aspects of it is the contribution of amatuer birders.
They want all of your, and my records. Everything we got. They use this information to look at bird populations from every possible perspective. For example they can look at a particular species like Ovenbird, and create a moving range map that follows their annual movements in great detail. They can pinpoint exactly what habitat the birds utilize, and follow population trends over time. This is one scenario of many that eBIRD looks at.
eBIRD has good information about the eastern United States, but need more information about the rest of the world.
What they do for birders like me is organize our individual lists and let us view our own records from numerous statistical models.
If I lose my book, it will live on in perpetuity. I get to compare my records with what others are seeing in the same areas etc.
The problem for me is that I have so many old bird lists that it will take many months of tedious work to transfer them to eBIRD. This all may be boring but it represents a great leap of scientific progress. Check it out for yourself.
Posted by john at 4:52 PM

Oh wow, John, I never knew about this book! I had forgotten what year our first CBC was, but there you have it written down.

I've been keeping my South American bird sightings on an Excel spreadsheet. It definitely doesn't have the history, the soul, or the sheer numbers of your Book, but it's fun to sort the data in various ways.

Hello Maggie,
I've been enjoying your blog reports about your trip to Argentina. I hope you send your bird data to eBIRD. They probably have little information from Ecuador. Are you staying there for another year?