Time For a Reptile Fix 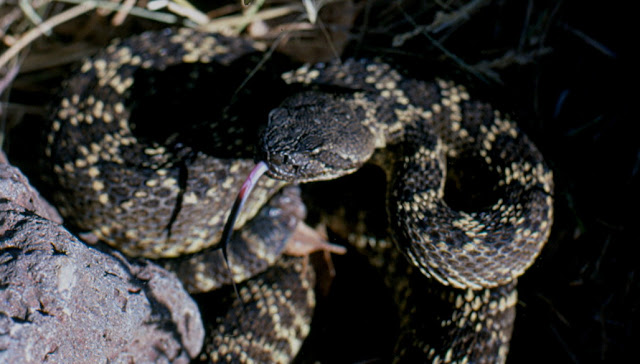 Right now I'm working on a painting set in the desert Southwest. That, and the very warm, sunny weather we are experiencing around here lately has made me nostalgic for my old homestate of Arizona. I have been reviewing old photos from there and remembering that before birds, I was a herper.

The common rattlesnake species around Lakeside where I lived, was the Arizona Black Rattlesnake. It is a sub-species of the highly variable Western Rattlesnake, (a super-species made up of many sub-species).

Of the hundreds of snakes that I have encountered in my travels, two individuals stand out for being the most pugnacious. One was a Siamese Viper that literally chased me off the road in Thailand, and this very excitable Western Diamondback in the above photo.
I found it under an old refridgerator outside the small town of Clifton. In it's fury, it struck at everything and even bit itself several times. There was venom flying all around the place. I was very intimidated and wanted to keep my distance, but I was goaded into capturing it by some friends who were with me.
They twisted my arm into bringing it home so we could show more of our friends and co-workers this exceptionally irascible snake. In a few days it calmed right down and became easily manageable for photos.

Continuing on the venomous snake theme. This is an Arizona Coral Snake. It is possible that I have posted this photo previously. I just dont remember. It is the opposite of the previous snake, the Arizona Coral Snake is known for it's meek disposition. It spends almost it's entire life underground, and feeds almost exclusively on other small snakes. 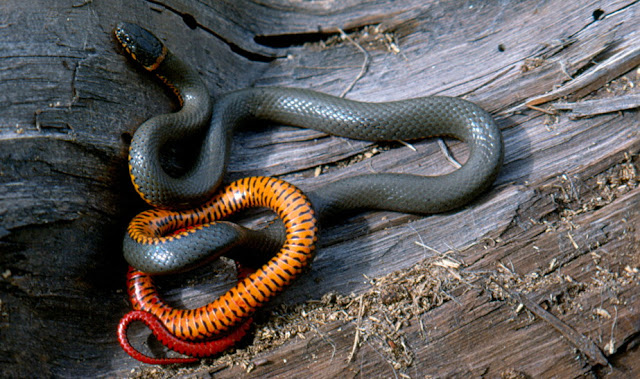 One small snake that is toxic to the coral snake, Regal Ringneck. They also spend most of their time underground. 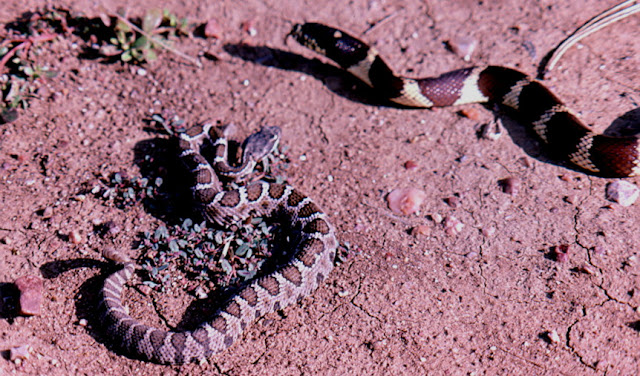 Another species of kingsnake, the California Kingsnake also occurs in the deserts of parts of Arizona. Kingsnakes are cannibalistic, and this kingsneke is getting ready to eat a young Arizona Black Rattlesnake.

Let's move on to some lizards. There are many species of North American lizards that belong to the fence lizard clan, sceloporus. One of the largest is the Desert Spiny Lizard. This is a female. The male is more colorful.

A close relative to the Desert Spiny Lizard, this is a Clark's Spiny Lizard that occurs at higher elevation than the former species. 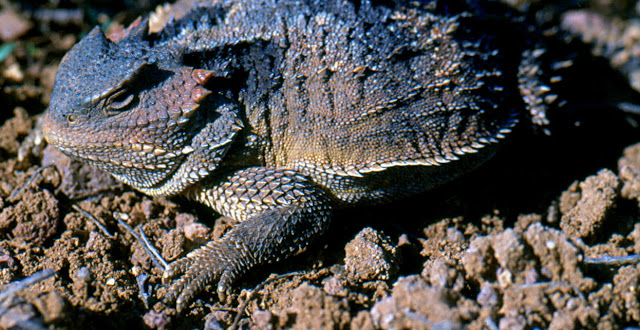 One of the defensive behaviors of the Mountain Short-horned Lizard is puffing up with air to appear larger. Rarely they will squirt blood out of their tear ducts. They eat mostly just ants.

From anecdotal observation, I believe that Madrean Alligator Lizards are more intelligent than other Southwestern lizards.  When you drop a bunch of lizards into a terrarium, most of them run headlong into the glass, and they wear themselves out trying to climb the smooth glass sides.
Madrean Alligator Lizards dont really do that. They systematically explore the enclosure, looking for an escape opportunity.They are far less likely to bite when being handled than other alligator lizard species.

I'm sure that I've posted this photo at some point. My favorite lizard of the White Mountain region of Arizona where I lived was the Collared Lizard. They are large, belligerent, colorful, and they run on two legs. This is a female. They do tame easily, like most reptiles.
Posted by john at 4:51 PM