Racing Down the Knik River 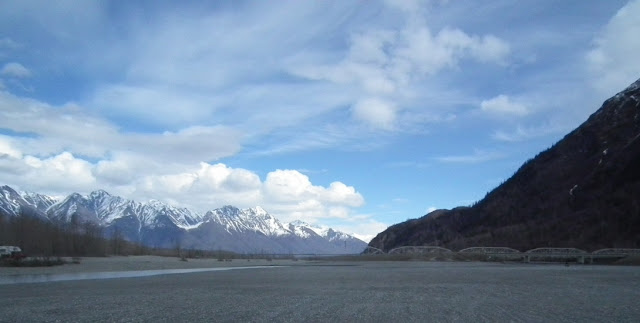 The photo above shows the flat bottomlands of the Knik River about 35 miles east of Anchorage. It is surrounded by majestic mountains that are covered by snow most of the year. The river is born at the base of Knik Glacier, and empties into the Knik Arm of Cook Inlet, (Pacific Ocean). 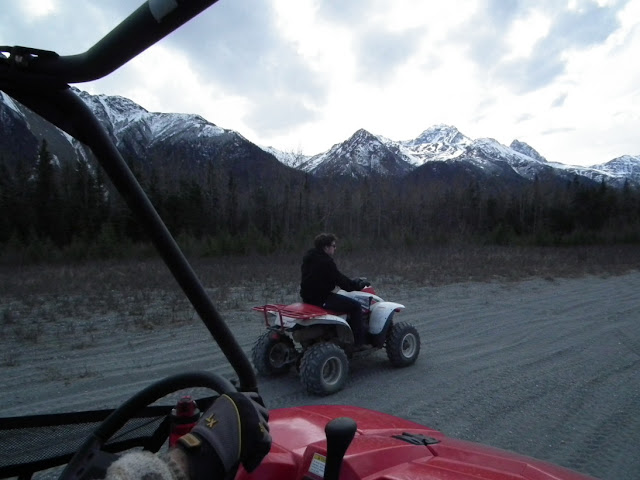 My friend Dan, his teenaged son Danny, and I started our journey at the railroad bridge. The area has been designated as a recreational use area. That means ORV's. Dan owns four of them. In some places in Alaska and just about everywhere else, ORV's do great environmental damage. They destroy sensitive salmon spawning streams along the coast. Drunken rednecks chase down wildlife, and shoot up the countryside. They spread litter far and wide, and enable fat, lazy jerks to get into the wilderness without working hard to get there. The problem is especially bad in isolated villages that have no roads to speak of. Alcohol and stupidity seem to accompany ORV's all too often. 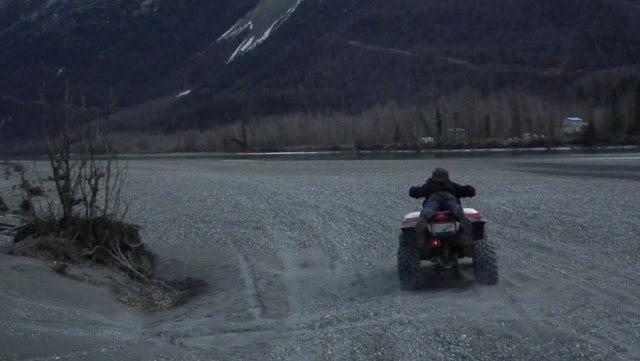 Here Danny hotdogs as much as he could dare in front of his father. There were some morons doing the same thing on a speeding car nearby. Anyway, back to my rant about 4-wheelers. They cause permanent damage out on the tundra, and especially erosion all over the Southwestern deserts. I hate what they do, but I sure love riding them. 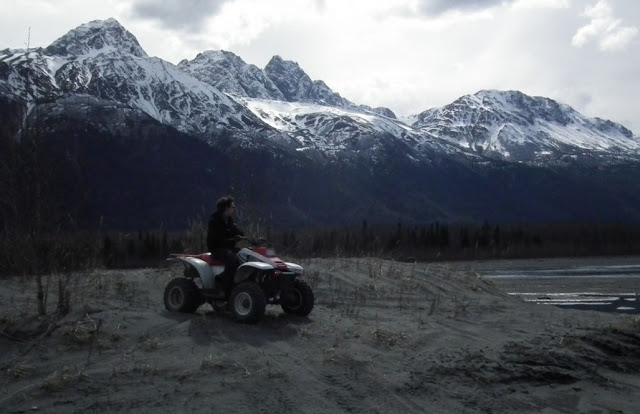 Dan and his son are nothing like the unscrupulous rednecks I have been describing. They are very conscientious about where they ride and how they interact with wildlife. The Knik River bottomlands handle the impact of 4-wheelers better than most areas.

Danny leaves us in the dust. 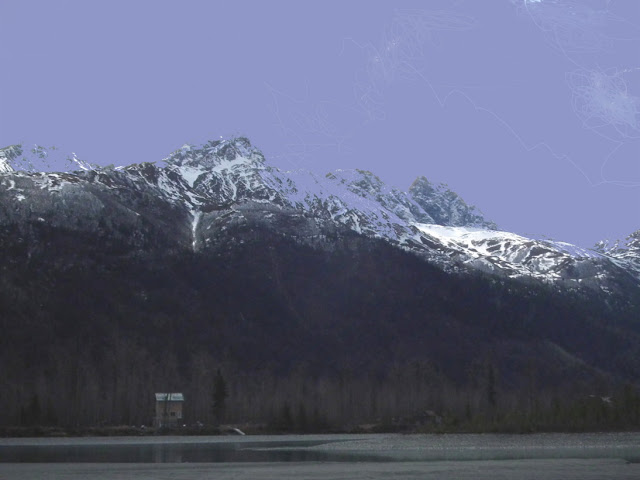 There are a few people who live along the river. Those who are too close to the river occasionally lose everything when the river changes course, or overflows it's banks. They also complain bitterly about jackasses with guns that shoot indisciminately in the area. It's a wonder that any wildlife survives at all. 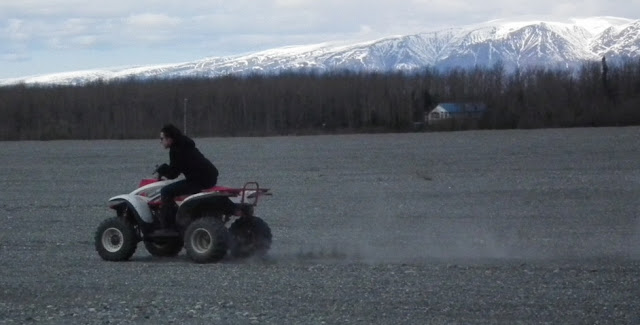 These homes are in the shadows of the surrounding mountains and see no sunshine all winter. 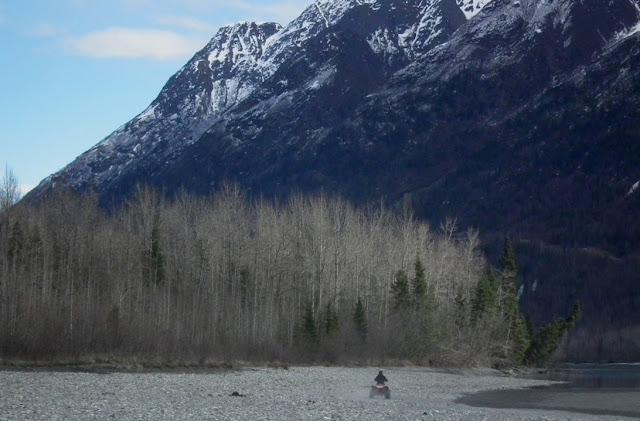 You can see that the Birch trees have not yet leafed out this far north. The snow has been gone for only a few weeks. There is still about three feet of snow around Dan's cabin on Goose Creek.

These are the Talkeetna Mountains. 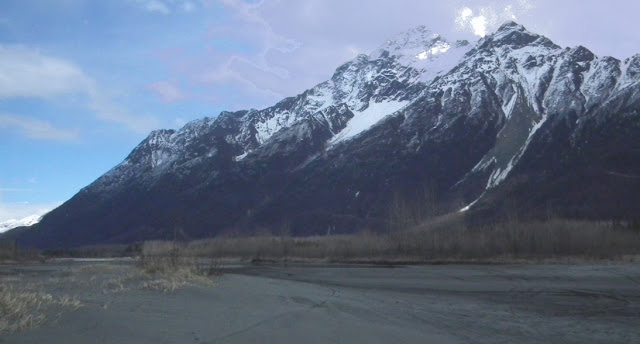 The dominant mountain in the area is Pioneer Peak that I have photographed many times. It is part of the Chugach Range. 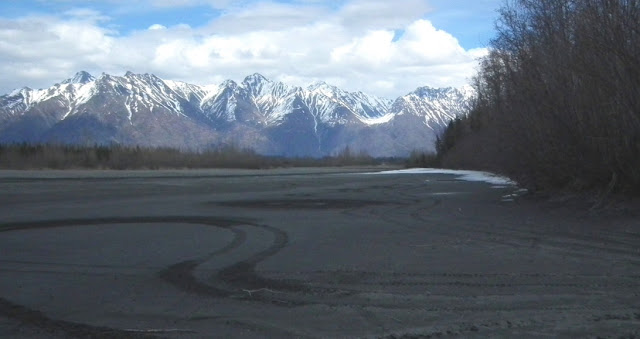 This is really just a blog post to show off the local scenery. 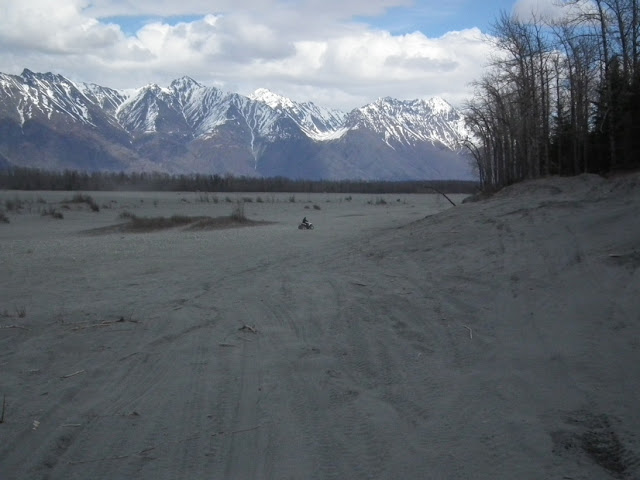 The trees on the right are Black Cottonwoods. They are the largest trees around these parts. Permafrost and harsh winters dwarf the trees somewhat. 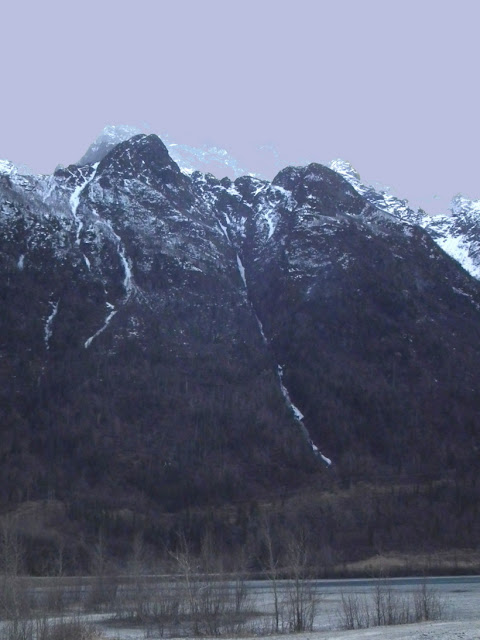 The white streaks going down the mountainside are avalanche shutes. 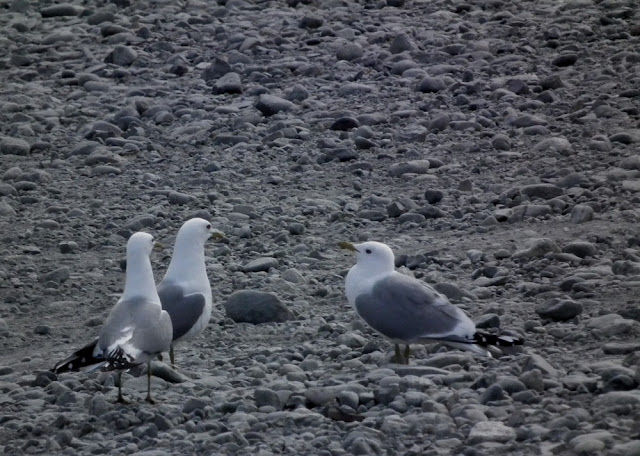 The only wildlife we saw were a few ducks, a Hairy Woodpecker, and the ubiquitous Mew Gulls. There was lots of fresh Moose poop too. 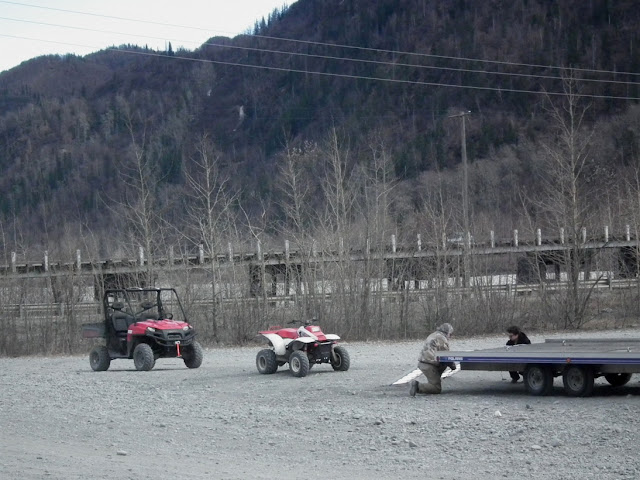 The end of a fun day. Dan and Danny are setting the ramps in place before loading up the 4-wheelers.
Posted by john at 12:00 AM