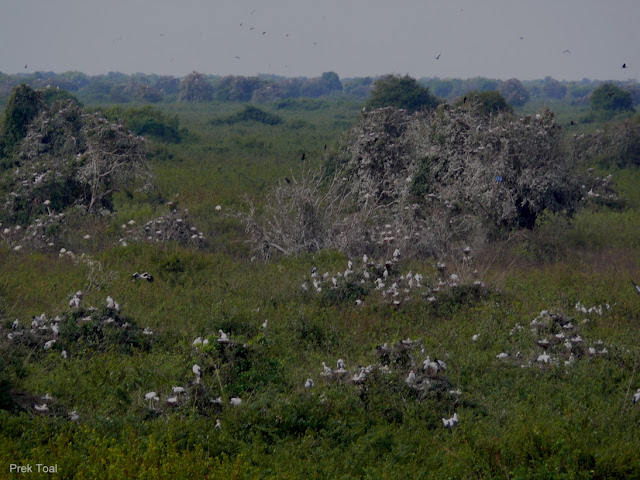 A few years ago, I briefly covered both Prek Toal and Angkor Wat in one post. Now I'm going to take the time to do it right. The photo above shows a bunch of nesting Asian Openbill Storks. There are some Painted Storks and other odds and ends scattered around as well. The vegetation gives the impression of solid ground beneath, but it's all inundated by several feet of water. 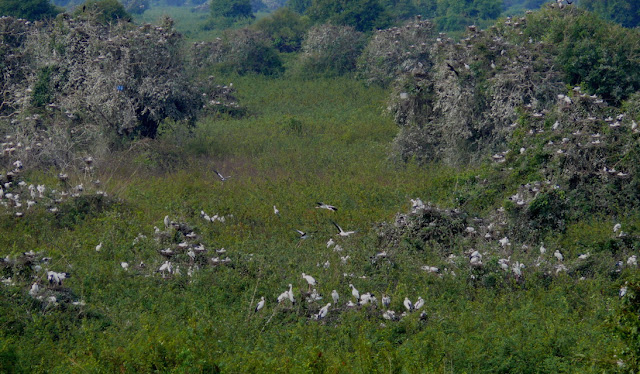 The day started at 4:00am when we left our hotel in Siem Reep. A short tuk-tuk ride to Chong Neas, a boat ride across part of Tonle Sap Lake, and an arrival to the floating village of Prek toal at about 6:30am. We showed up to the Prek Toal Bird Sanctuary Administrative Building, (floating), only to be told that it opens at 8:00am.
When some sanctuary personnel showed up at 8:00am, they told us that we needed to go to the sanctuary in their boat, with their people. The tour would only last until 1pm. I tried to explain that we were willing to pay extra for a customized, longer tour of the sanctuary. Because of the language barrier, we could not make them understand our desires. 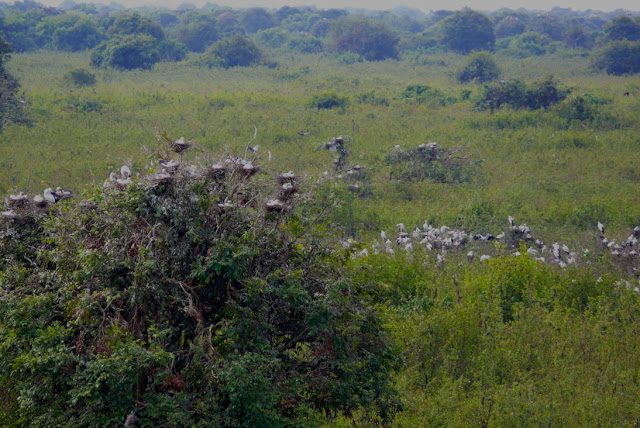 It took half an hour to fill out the paperwork, pay the fees and hop aboard a clunky wooden boat. There was our Sanctuary guide, his son, another boatman, Gary, our tuk-tuk driver and myself. None of the sanctuary people spoke one word of english.
Finally we we off to the sanctuary. I was chomping at the bit in anticipation. Prek Toal is known to be the only place in Southeast Asia to see some critically endangered birds, Greater and Lesser Adjutant Storks, Milky Storks, Grey-headed Fish Eagles, White-backed Falcons, and possibly the near mythical Bengal Flouricon. Many other nifty birds that are hard to find in other places. 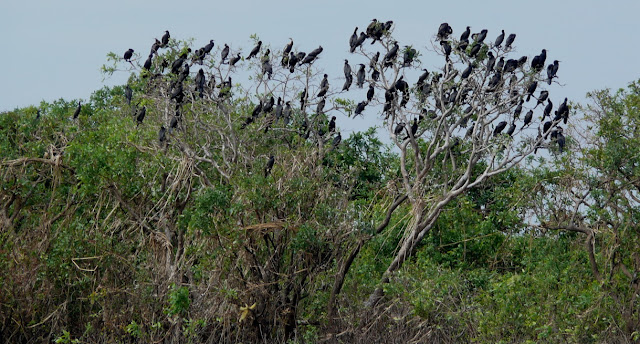 Right away we started seeing trees full of Indian, and Little Cormorants. New birds for us. We saw Grey, and Purple Herons, Whiskered Terns and much more. 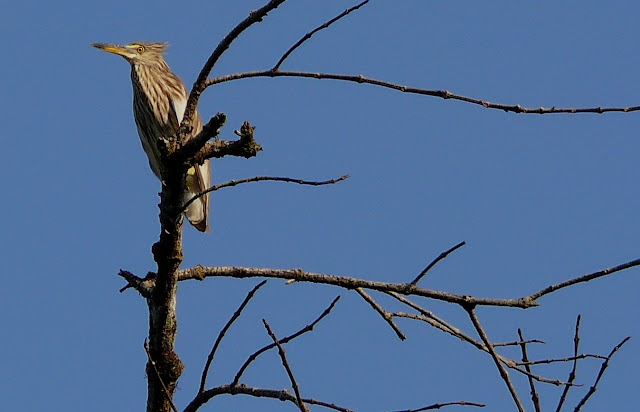 Chinese Pond Herons are an abundant species that was already very familiar to us. At about this point we started seeing some really awesome birds like Cotton Pygmy Geese, kingfishers, and small bitterns. We wanted to get some photos of these gems so we asked the boatman to stop whenever we saw an interesting bird. He stopped briefly, for every bird, rare or common. 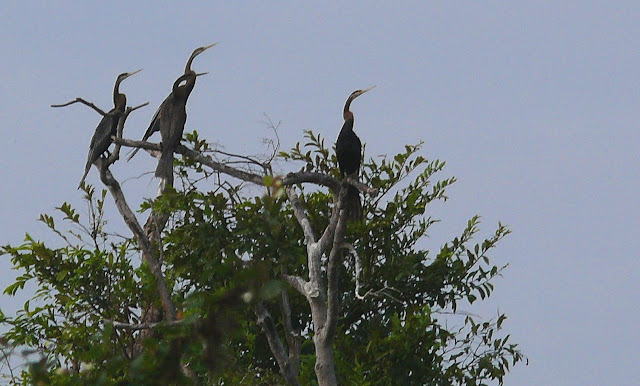 Oriental Darters are another hard to get species in most of Southeast Asia. Four in one tree is a very impressive sight. 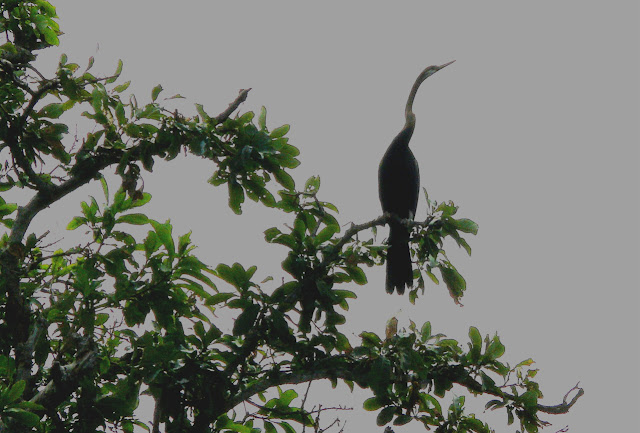 I wanted to take more time to try for better photos, but the boatman was running out of patience rapidly. It soon got to the point that he would'nt stop at all for most birds. I tried to get our tuk-tuk driver to explain to the sanctuary guide and boatman that we came a long way to see these birds, and that we wanted to go slow enough to photograph some of them.

We came to a rickety wooden platform, built into a tree. It overlooked the colonies of nesting Asian Openbill, and Painted Storks. They were at a fair distance, and we could not see any of the rarer stork species. A few birds flew closer to us, like the openbills above. 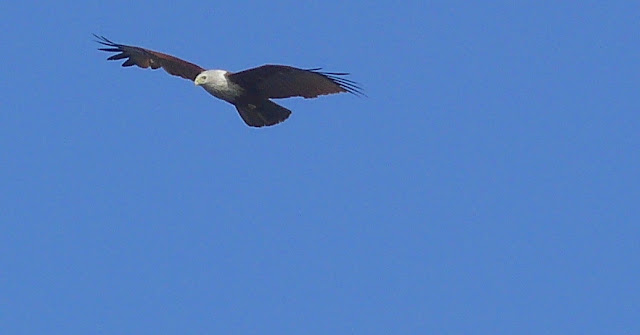 We found a pair of Brahminy Kites building a nest nearby. We also saw several other raptors, but I'm not sure of their identity. 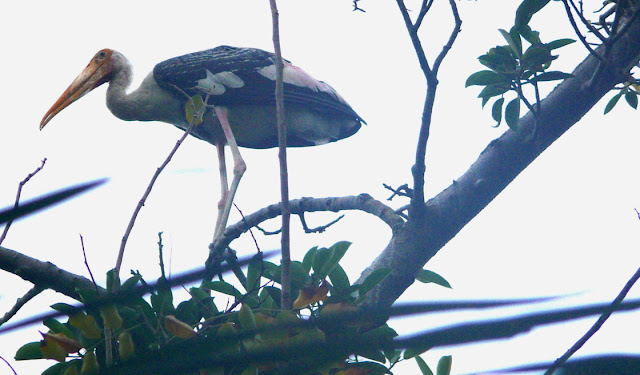 An adult Painted Stork. At about 10am we started back. The boatman and guide became very impatient like horses that are anxious to get back to the barn. They hardly stopped for anything even though we still had plenty of time. I asked our tuk-tuk driver how to say stop in Cambodian. Whenever we saw a good bird I shouted the word for stop. The boatman and guide would look at me like I was a madman, and ignore me. 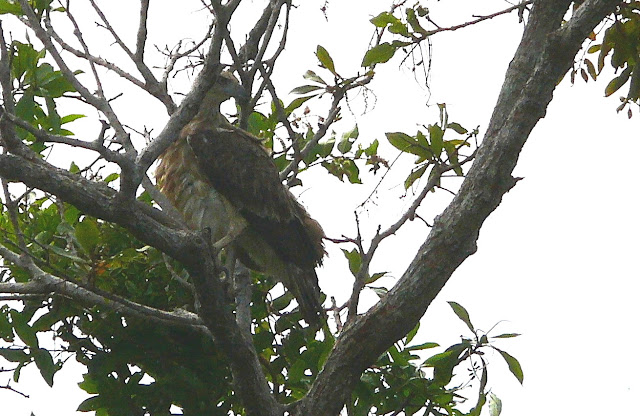 One great bird that they did stop for, a sub-adult Grey-headed Fish Eagle. We made it back to the village at about 11:30am. The boatman was proud of his accomplishment, like he won the race in record time. I was nearly apoplectic at that point. They got no tip from me.
Posted by john at 7:03 PM