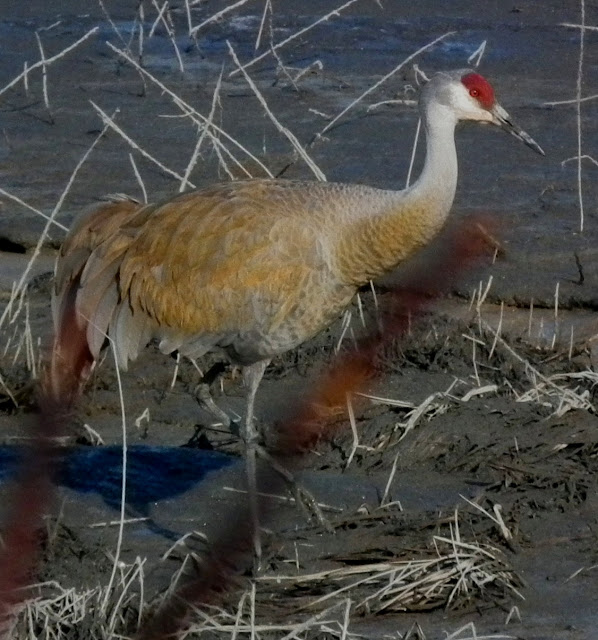 Yesterday I headed back to the coastal trail to see if the shorebirds have started arriving yet. Like a dummy I forgot to consult a tide chart before going. It is important to time a visit to the mudflats for high tide. Otherwise the shorebirds will be too far away because they tend to stay near the water.
There were no Sandhill Cranes in view yesterday, but I got so many good photos of them last week, so I'll include some of those photos here. 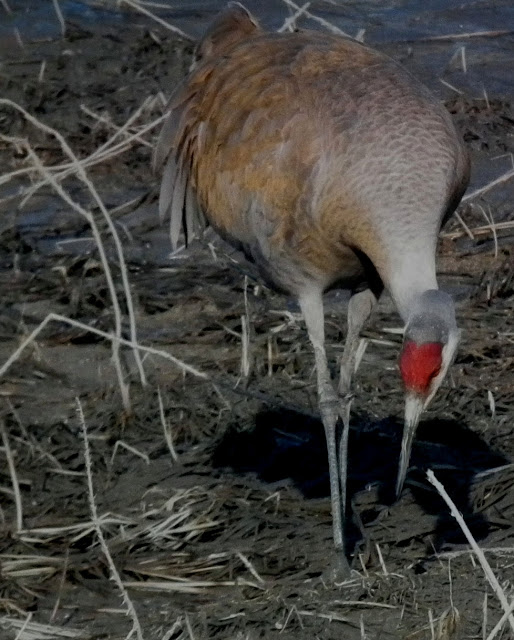 Cranes of all species tend to be amoung the most majestic of all birds. Most species of cranes around the world are in varying degrees of peril. Some are critically endangered. Sandhill Crane populations are stable, and healthy overall. 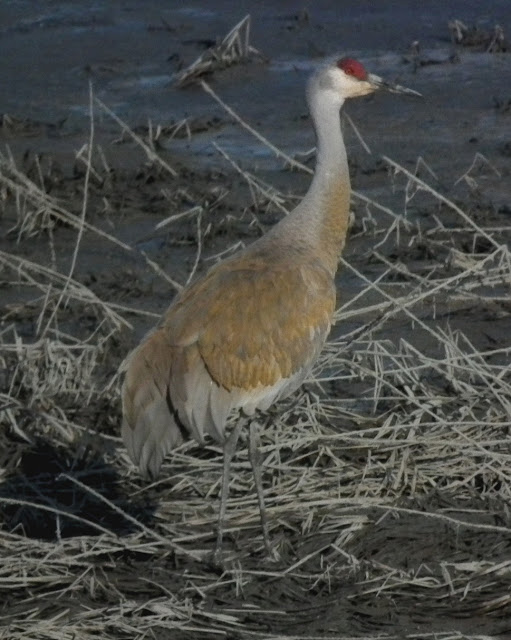 I'm not sure just how many species of crane there are worldwide. I can think of about ten species. There are probably no more than about fifteen species altogether. Would'nt it be nice to be able to see them all in their natural habitat? Dream on. The only crane species I have seen are the Sandhills, Grey-crowned Cranes in Uganda, and two Whooping Cranes in New Mexico. 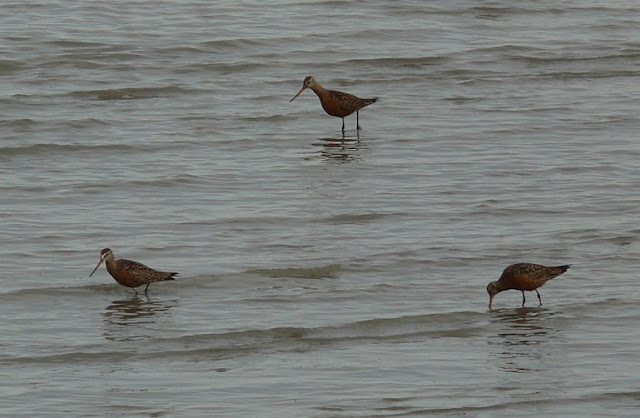 Yesterday I saw lots of Hudsonian Godwits from a distance. This photo was taken last spring. 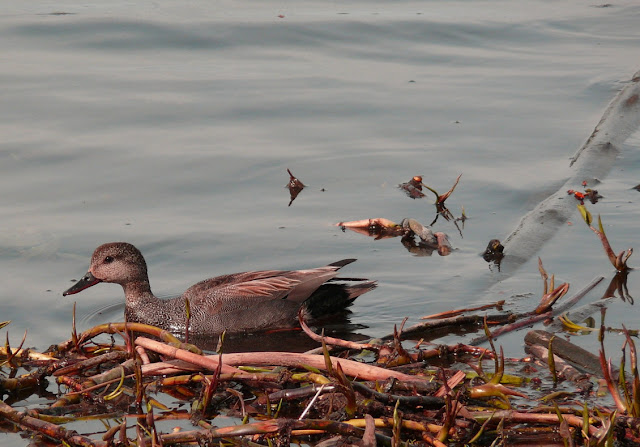 I also saw only one Gadwall at Spenard Crossing yesterday. This photo was also shot last spring. 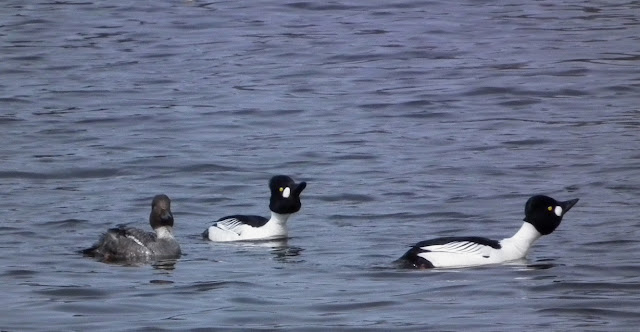 The goldeneyes were still at Spenard Crossing yesterday. These Common Goldeneyes were engaged in constant courtship display. Thy will pair up, and disperse soon to find tree hollows for nesting along local rivers and lakes. 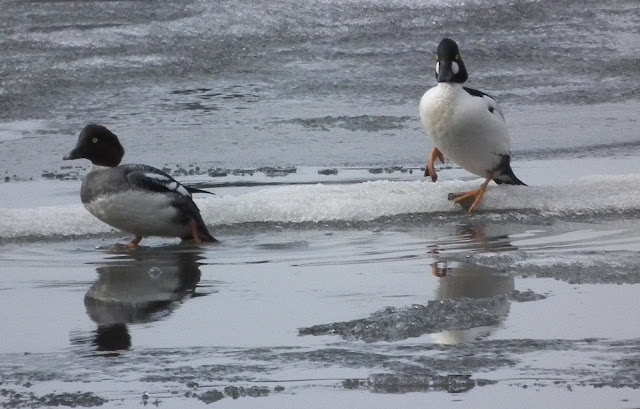 There was still ice covering about half of Westchester Lagoon. That did'nt stop the drake goldeneyes from pursuing the hens. There was a constant noise of cracking and grinding ice as it rapidly melted. The temperatures were about ten degrees cooler yesterday than they were the previous week.

In the open water part of Westcheter, I saw this Common Loon. For reasons that I don't understand, loons are seldom seen on Westchester. It would be nice to see that change. 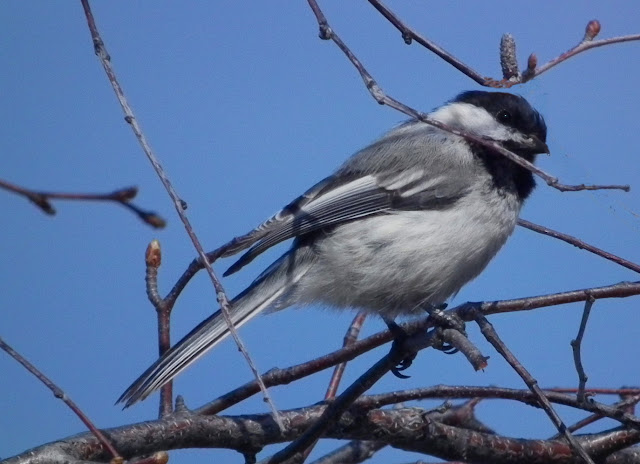 One last chickadee photo from last week. I'll be going back soon to see what new things show up.
Posted by john at 4:41 PM

Yes!, the marshes and estuaries,are one of the best places for observe wild animals,especially birds.I allways bisit this wetlands for launching photograps.This places are full of life and animal actibity.In my country its a good place for tracking and observe wild boars and also in the riverine forest and shores.There are aparticular crane that i dont know his features, is the BROLGA CRANE (Grus rubicundus)do you know this crane?.

Marc,
I am familiar with the Brolga Crane, although I have never seen one. They are fairly common in Australia. I hope to go there within the next few years.

Beautiful Sandhill Crane pictures, I have never been able to get that close to them. Your pictures of Goldeneyes on the ice are the first I have ever seen out of the water.

Steve,
For some reason, I can get closer to cranes along the coastal trail, than anywhere else around here. I believe that it is because of the waist high fence that runs along much of the trail. However there was no fence between me and these particular cranes. Dogs soon chased them off.