A Remodel, a New Painting, and Other Goodies 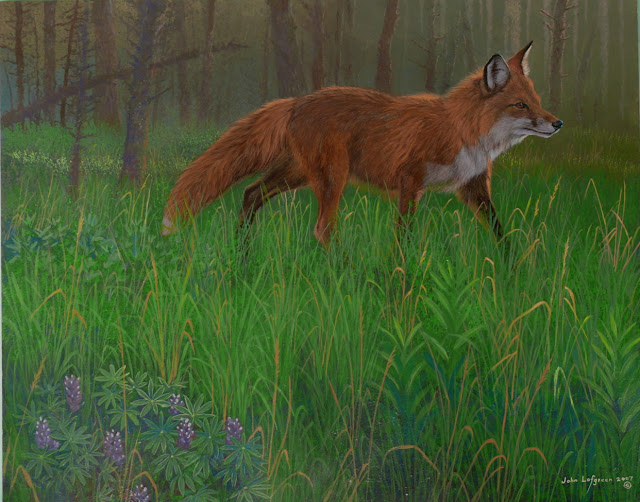 Four or five years ago I painted this 16x20", Red Fox called, Daybreak on the Meadow. I liked it well enough but nobody else did. 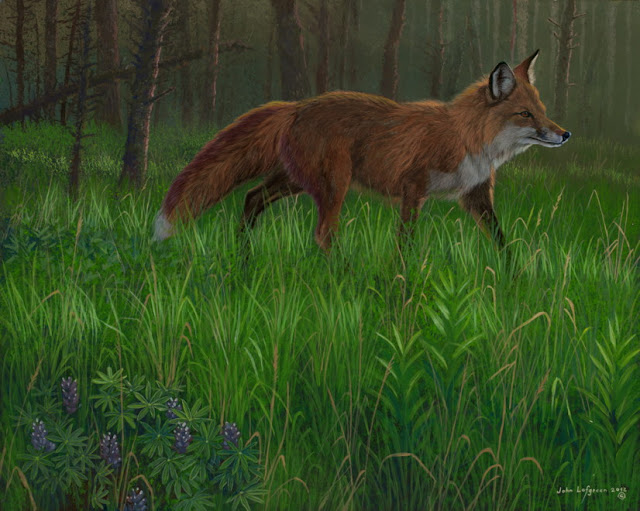 This is the new version. The actual painting is not any darker than the original version.What I did was brighten up some highlights on the trees, and some of the grass. Then I lengthened the fox's snout by a bit, and thickened it's tail and haunch. The photos leaves something to be desired, but I think the painting looks much better. 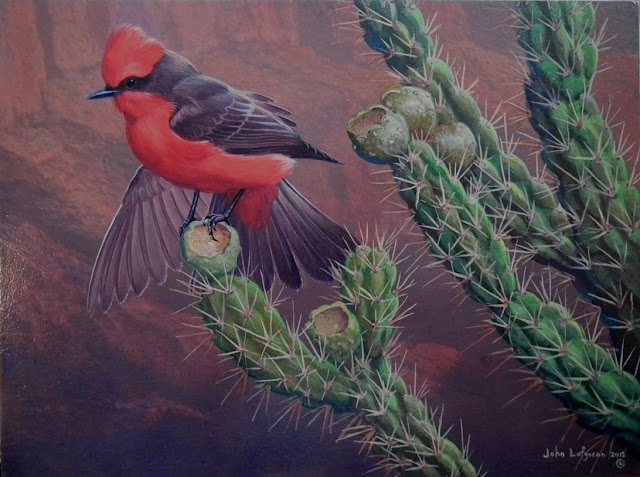 Another inadequate photo. The painting looks better, but is still nothing to crow about. It is a 9x12" Vermilion Flycatcher, my newest painting. 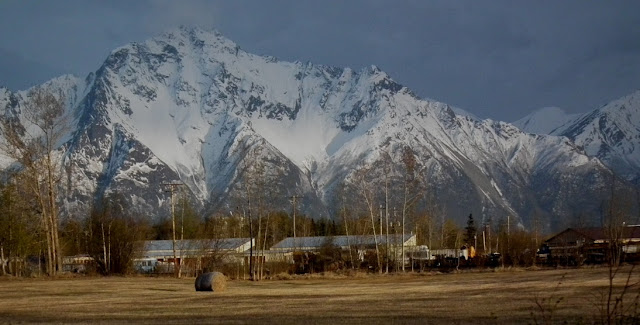 Last evening I attended the Matsu Bird Club meeting. This is the view of the town after the meeting. As we were coming into the outskirts of Anchorage, we spotted a Grizzly Bear standing right next to the highway. We zipped past it before I was able to get a photo but it was a thrill none the less. The first Grizzly that I have seen in about a decade.

This morning I went back to the coastal trail to check out the migrating shorebirds. There were mostly just Hudsonian Godwits like the female above. There were four Short-billed Dowitchers as well. Other first of season birds for me were, White-crowned Sparrow, Tree Swallow, and Yellow-rumped Warbler. 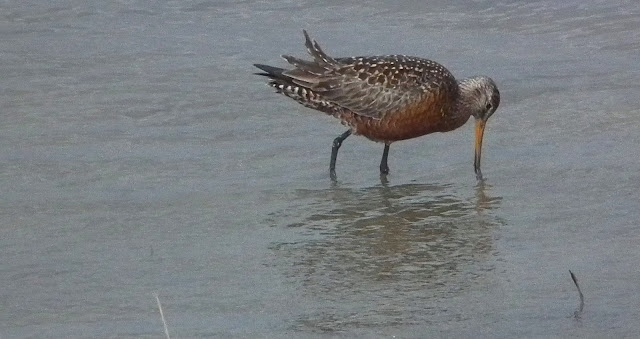 When the tide is too high, it causes the birds to disperse. Today I timed it just right to get fairly close to the godwits. This is a male in prime breeding colors. 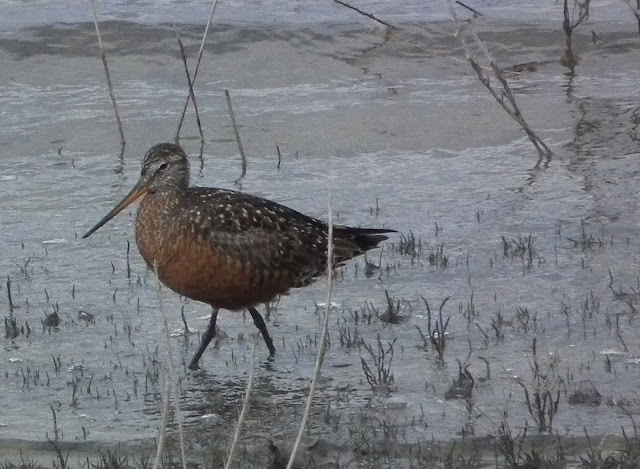 Another male, Hudsonian Godwit. I shot well over a hundred photos of godwits today. 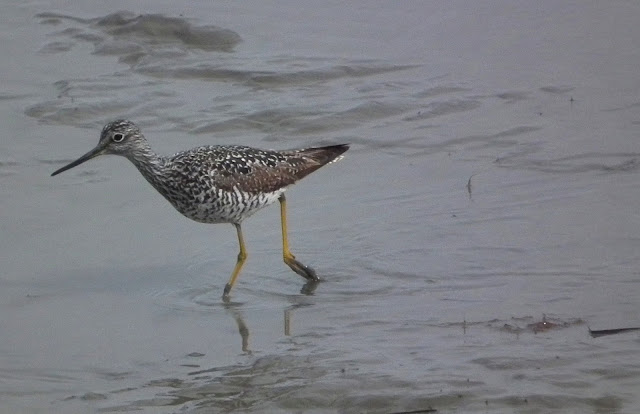 Besides the many godwits, I saw some yellowlegs. This is a Greater Yellowlegs in prime breeding plummage. 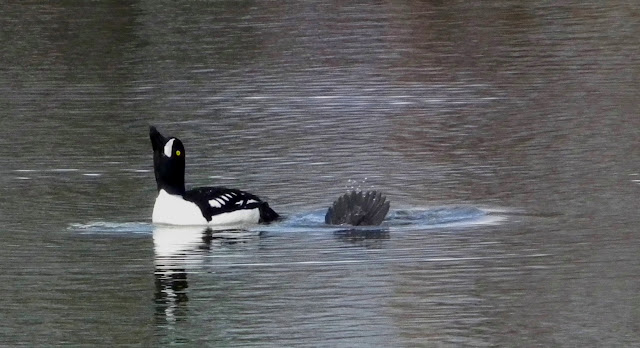 Today at Westchester, there were not many Common goldeneyes, but I did see a few pairs of Barrow's Goldeneyes. 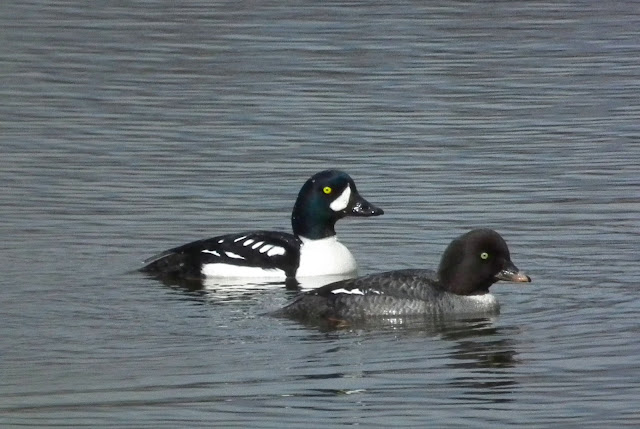 This is possibly the best photo that I have gotten of a pair of Barrow's Goldeneyes. They will clear out of here in a short while to get down to raising a family. 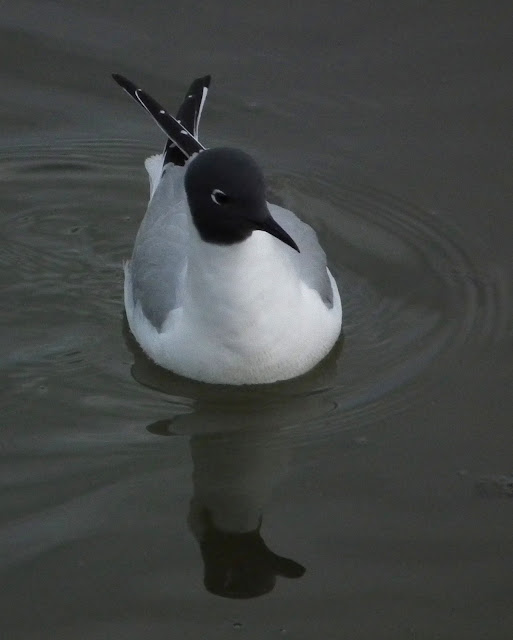 Another nice portrait of a Bonaparte's Gull.
Posted by john at 9:46 PM

I do like the highlights on the trees..places him there
what a beautiful fox
...all foxes are beautiful
Your birds are a delight to see
Wished you had described the bear....I will never see one
As always....I love your paintings

Good to hear from you Suz. The bear was fairly small, with a typical grizzled coat. It was standing just inside the fence of Jber Military Base. Not far from base housing. It must have recently emerged from hibernation, and was walking the fence line, looking for edibles.

Great talent!
Just what I like to do also!
You've done well adding some light on background trees!
The result is more vivid and animates somewhat the Fox!
Love your bird photos too!
Keep all this up, I can't find the time to paint or draw any more! :(
Cheers John!

I have to restore at least, five big pictures.I like bery much the photos of goldeneye and the dowichers.The southern coast of Alaska, must be a place with a high level of biodiversity,for his rich and ancient giant conifer rainforest,his big estuaries and marshes, that shelter a big bird populations combined with rich bolcanic soil, hig mountains and glaciers.Its an explosive coctail of northern biodibersity of the world!!, together with pacific Siberian and northern Japanese coasts !!.

Noushca, thank you for your comments. I hope that you can find time to do your artwork.
Marc, your knowledge of geography is impressive. This part of Alaska has an abundance of bird numbers in the summer months, but less diversity of species that areas further south have. Arizona, Texas, and California have many more species. Mexico and further south have even more abundance.