A Glorious Day on the Trail

This morning I had every intention of getting some work done. Since I did'nt manage to do a lick of work yesterday, I felt a little guilty for being so idle.
While I was eating breakfast, the local weather report said that today was going to be the only sunny day for the forseeable future. That sealed the deal for me. I knew I needed to get out and enjoy what may be the last nice day of the year.
The photo above shows what the Coastal Trail looks like right now. Although it's bright and sunny, the temperatures are a little cool as you can see by the coats that these women are wearing. They were overdressed as far as I'm concerned. It was'nt that cold, low 50'sF. The mudflats lie to the right of the trees in the photo. The railroad tracks are to the left. The city of Anchorage is on the other side of the tracks. 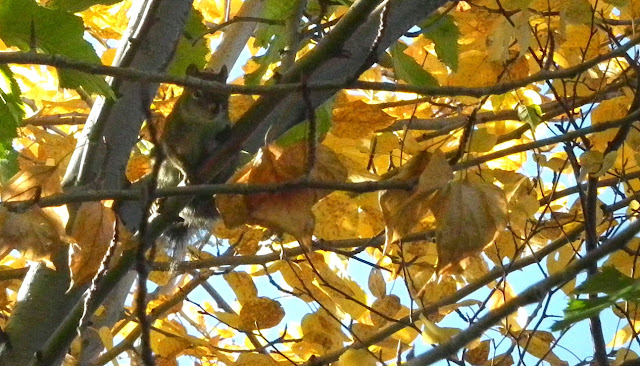 My main concentration today was to photograph critters amid the brightly colored fall leaves. There were several Red Squirrels in the trees growing next to the trail. 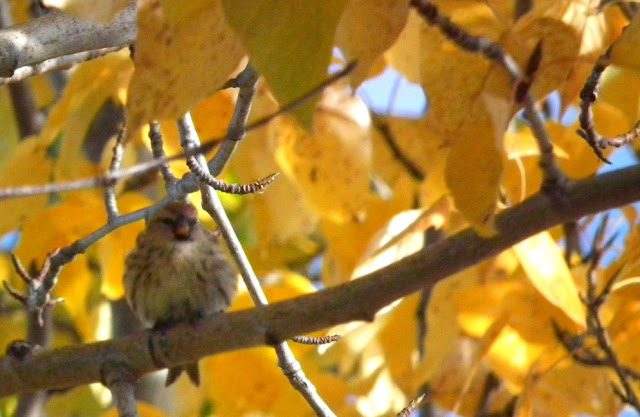 Many of the songbirds are already out of here, but Common Redpolls are one species that stays around all year. If this bird would have stayed in place for one or two more photos, I could have gotten it in better focus. Nevertheless, this is exactly the kind of photo I was aiming for. 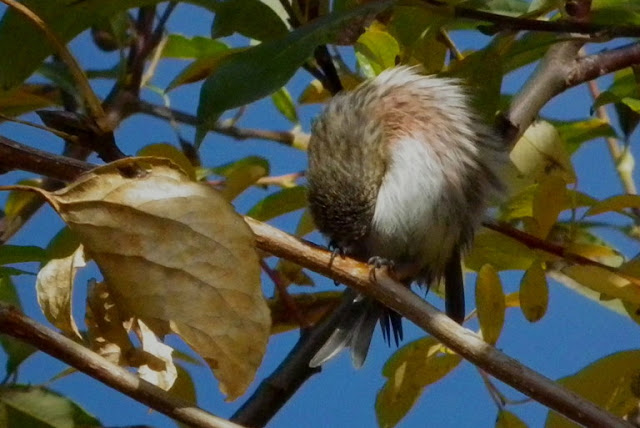 This is another (preening) Redpoll that was much more cooperative. The setting is not quite so scenic as the former photo, but it still looks good. 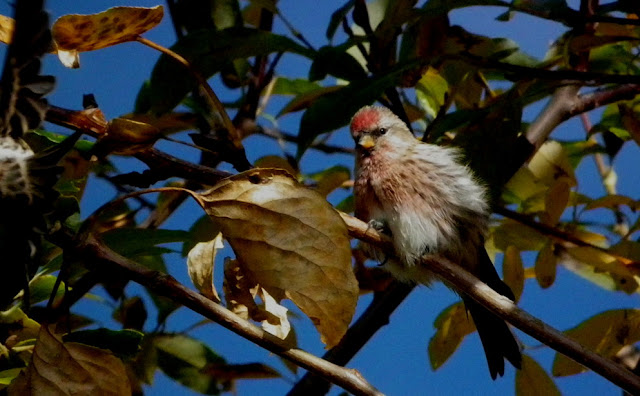 This little male posed for many photos. This one is as good as any of them. 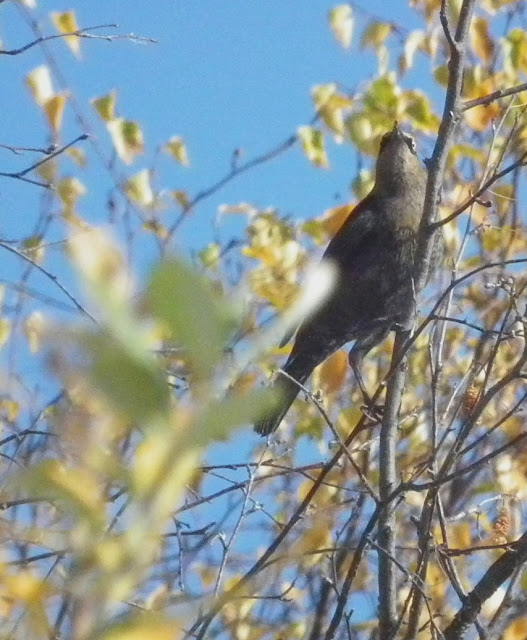 It was a bit of a surprize to me, to see some Rusty Blackbirds still around. Even more surprizing was a Varied Thrush along the Chester Creek Greenbelt. 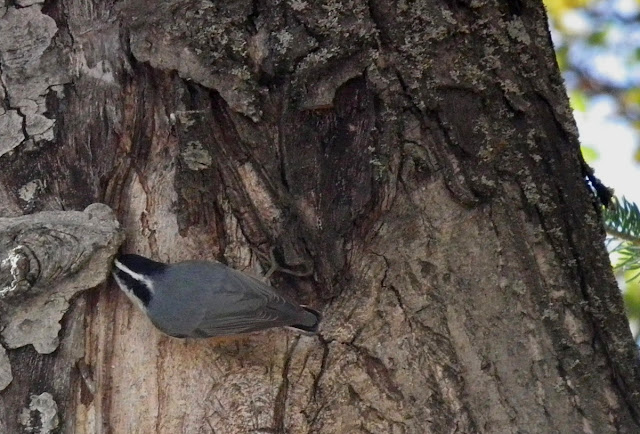 Red-breasted Nuthatches are another species that stays all year. This one is either depositing some winter food storage under the bark, or searching for a tasty insect for lunch. 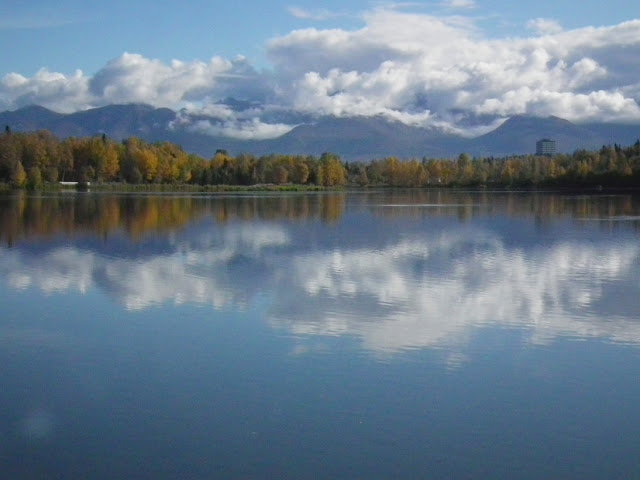 Westchester Lagoon was at it's usual picture perfect best today. This photo does'nt show it, but there were still plenty of ducks on the lake today. Most of them were too far away for photos. 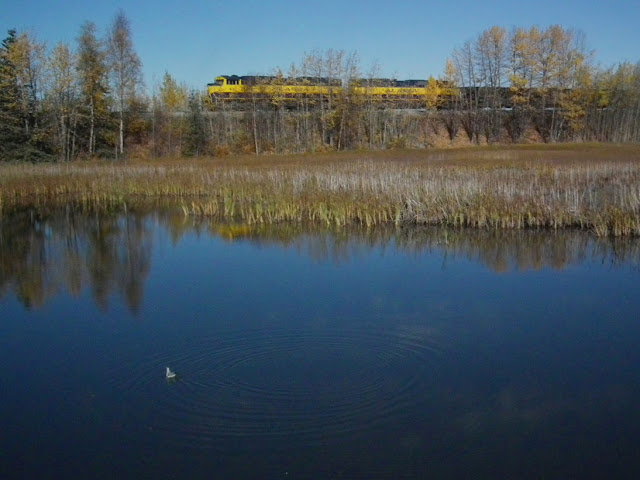 Turning to look the other direction, I got this photo of the choo-choo passing by. The Bonaparte's Gull in the foreground does'nt seem to be too concerned by the train's loud whistle. 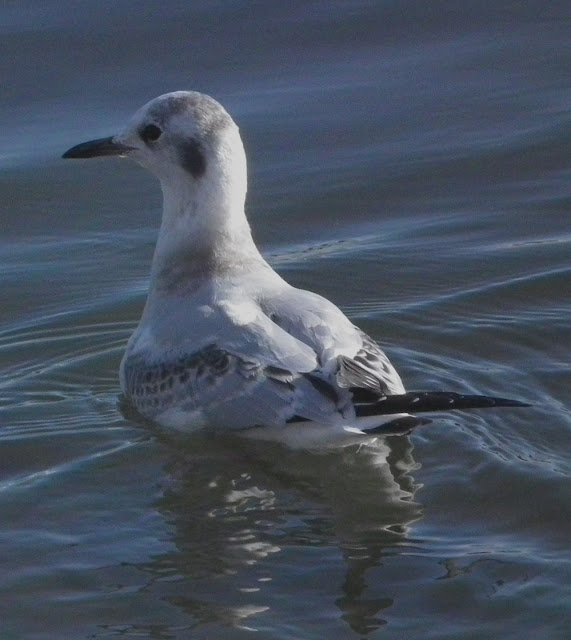 There were more Bonaparte's around today than usual. They will be gone in a short time. I was surprized that there were still a few Greater Yellowlegs around. Things are heading south in droves these days. 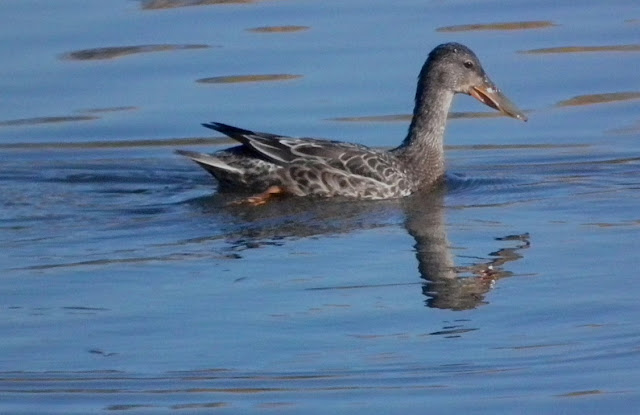 Nowadays ducks are far enough along in their annual moult that you can easily tell their sexes apart. I've been seeing this one female Shoveler in the same area on Westchester for about a month or more. 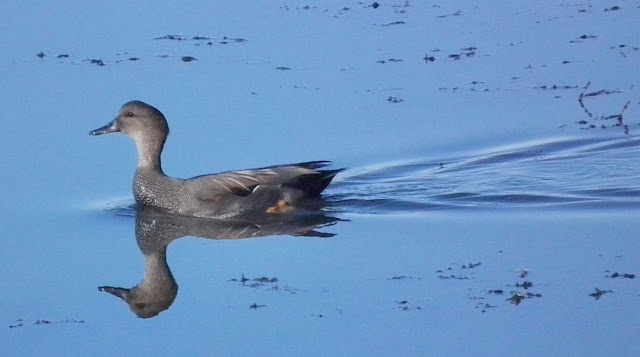 The last time I went to Westchester, I saw well over a hundred Gadwalls. Today there were nine. This male is all done with his moult. Not colorful, but very elegant. 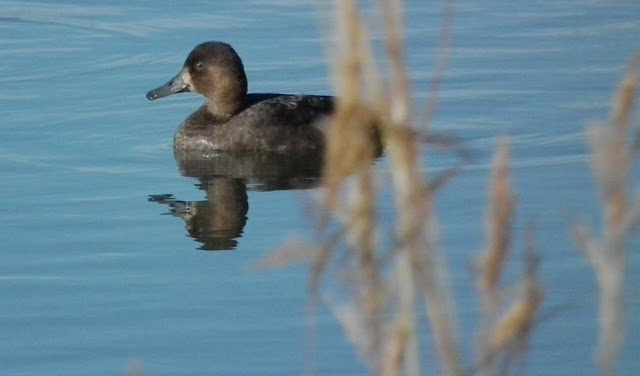 A female Greater Scaup. Female Greaters usually have a white cheek patch, while female Lessers do not. You can tell by the shape of this bird's head, that it is a Greater Scaup. It is probably a young duck that is just growing into adult plummage. That may explain the lack of a cheek patch. 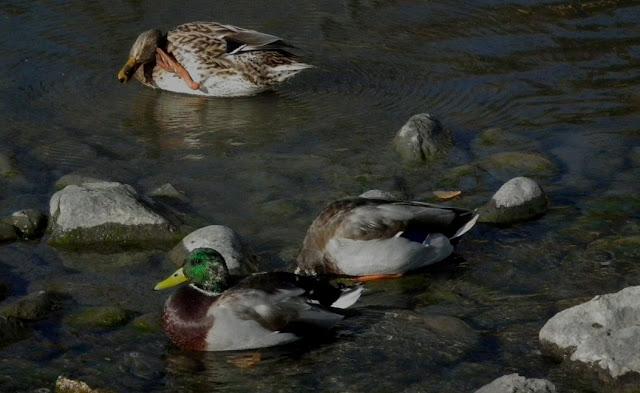 These male, Mallards are almost completely out of their moult. Are they older adults, or young of the year just coming into adult colors? I have no idea. 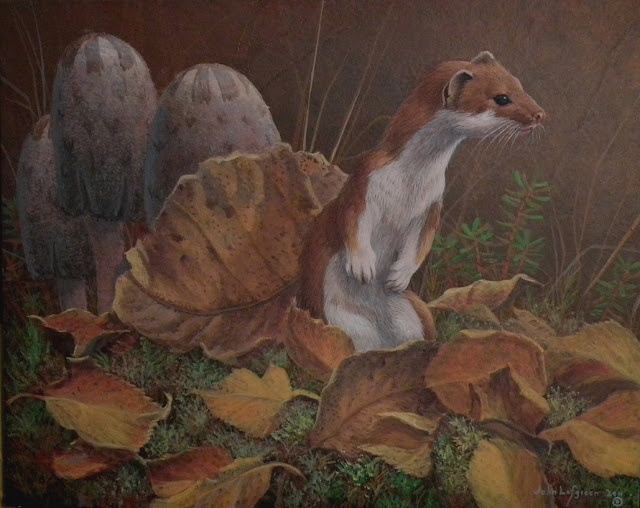 My latest painting. An Ermine, 8x10". I looked for the Ermine today that I saw twice this summer on the Coastal Trail, but I missed it. 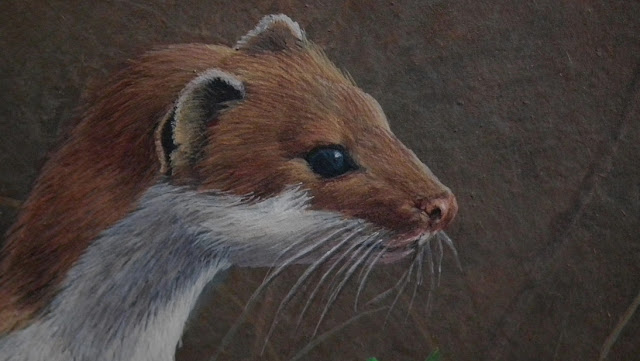 A detail of it's head.
I sold two older paintings today, A red-throated Loon, and a Red-necked Grebe. I also got a comission to paint a Harpy Eagle. I guess my career is'nt entirely dead after all.
Posted by john at 10:53 PM

the photo of the gull and the train
I was interested in the circles in the water..the gull swiming along
what caused the circles?
This was a very interesting picture..where does my eye go
almost a contradiction of travel moods....loved it
The mallards are interesting with their various movements
I just love birds....enjoy your photos very much
Our Robins are about to leave :(
glad you got out and enjoyed the sunny day and cool weather
I see the women dragged their purses along...don't think they saw any birds ;)

oh....and don't think I missed the pessimism that you snuck in that last line....
Your work is fabulous
and I really like that you LIKE the animals and birds that you paint
it shows
love the whiskers on that guy

Thanks again for your comments Suz.
The Bonaparte's Gull in the train photo had been hopping up, and diving for fish just before I snapped the photo. It looked like it was dancing on the water, but my poor camera could not focus on it's dainty actions.
Ermines actually have dark whiskers in their summer colors, but dark whiskers would not have showed up, so I exercised some artistic license.

Like most artists, I often get discouraged, and my sour attitudes often worm their way into my blog.

with talent like your....be not discouraged
and I thank you for sharing