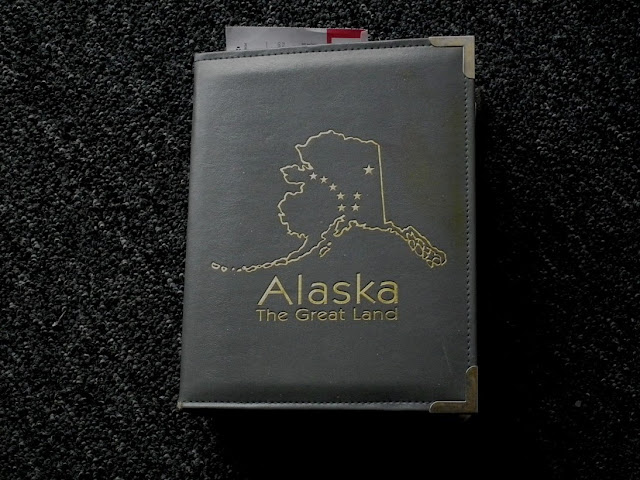 Is'nt that an old song by the Doors? Way back before the days of digital, and before I got in the habit of having my artwork professionally photographed, I tried to photograph my own work. Using either slide film or print, I accumulated a collection of photos of my own paintings. The prints, I put into the photo album above.
One day years ago I was preparing for a big art show here in Anchorage. One of my regular collectors called me up and asked if I was going to have any Elk paintings at the show. It so happened that I had a nice Elk painting, but it was hanging in a gallery out of town.
I told him about the painting and I told him I would bring a photo of it to the show. Then I grabbed the photo album and brought it with me to the show. I placed the photo album off to the side, on the table in my display. 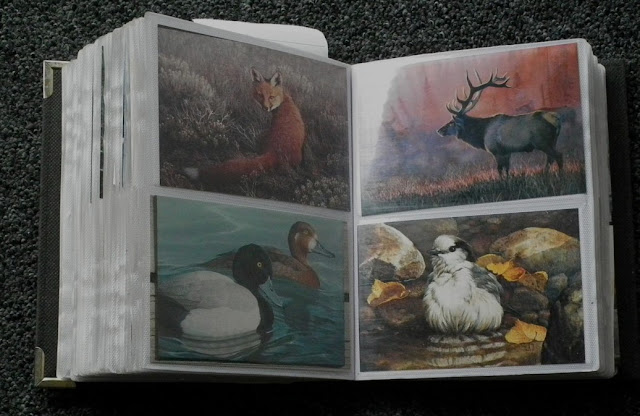 Almost as soon as the show opened, a woman came by and zeroed in on the photo album. She opened it up, and carefully studied every photo in the album. She completely ignored the actual artwork in the display.
At one point she pointed to one of the paintings and said, "I would really like to see this painting". 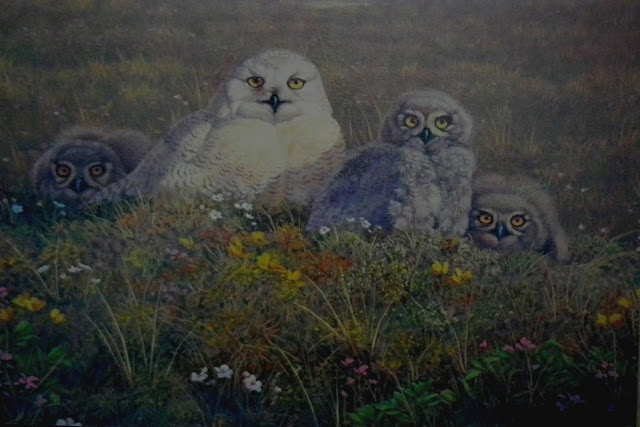 I pointed to the actual painting that happened to be hanging right in front of her. She glanced at it for a few seconds, and went back to studying the photo. I thought that her behavior was so odd.
After she left, someone else started flipping throught the photo album. Then another, and another. Many people would say they wanted to see one painting or another. When I pointed to the real painting, they all did exactly as the first woman.
Other people ignored the photo album, and looked at the artwork itself. As in all art shows, most people walked past without even glancing at the display. Why come to an art show, and walk throught it without even stopping? Most people do just that. People are strange. 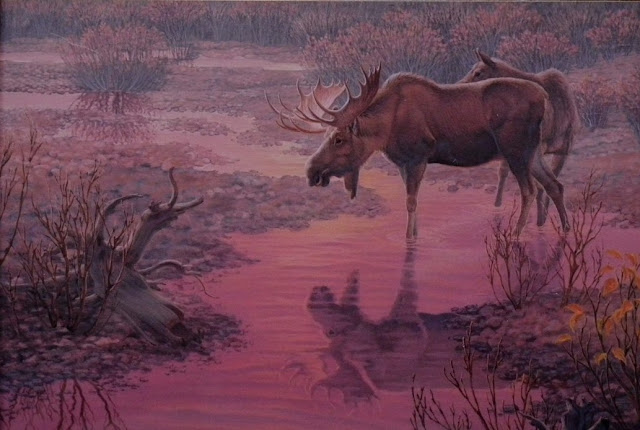 Sometimes there was even a line of people waiting to look at the photo album, and completely ignoring the original artwork. Eventually I started politely asking people why they spent so much time looking at photos, but would'nt look at the actual paintings? They all got a flustered look on their face, and abrubtly left without answering. 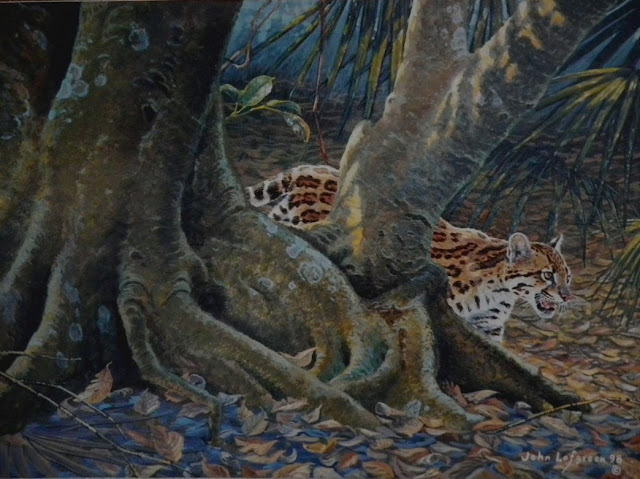 To this day I am baffled by all this. Eventually I put the photo album under the table so people would have to deal with the raw paintings. So, what do you think about this? I would really like to get some feedback if anyone has any insights about why people could relate to photographs, but not original art. 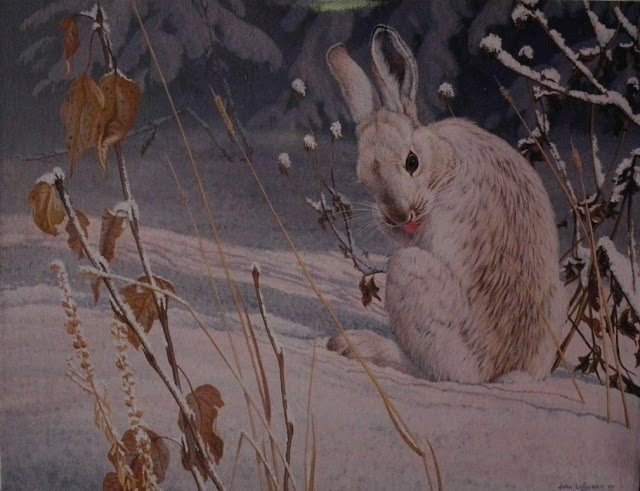 Anyway, these are all photos of those old paintings from the photo album. This is a 16x20", Snowshoe Hare called, Snowbunny. 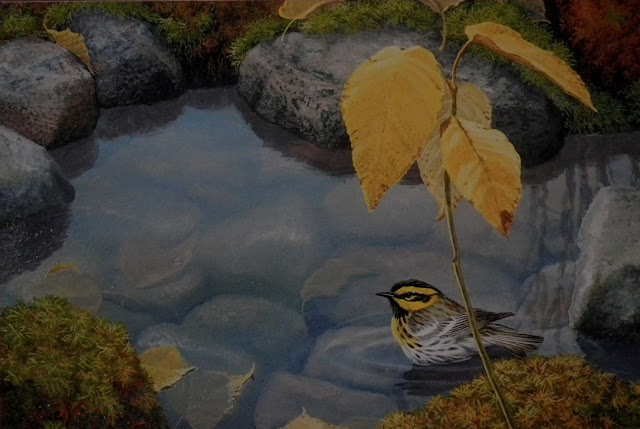 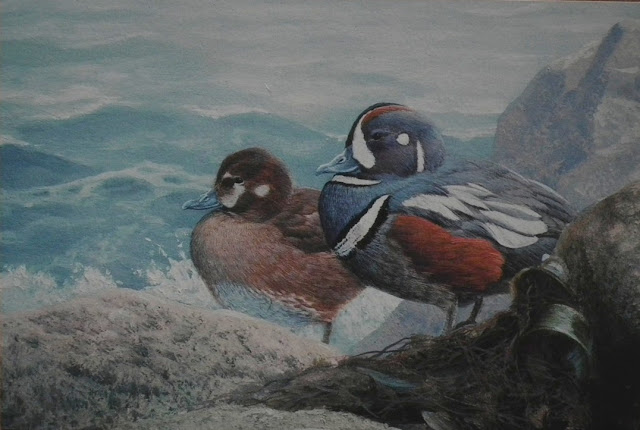 A detail of a 5x12" painting of Harlequin Ducks. 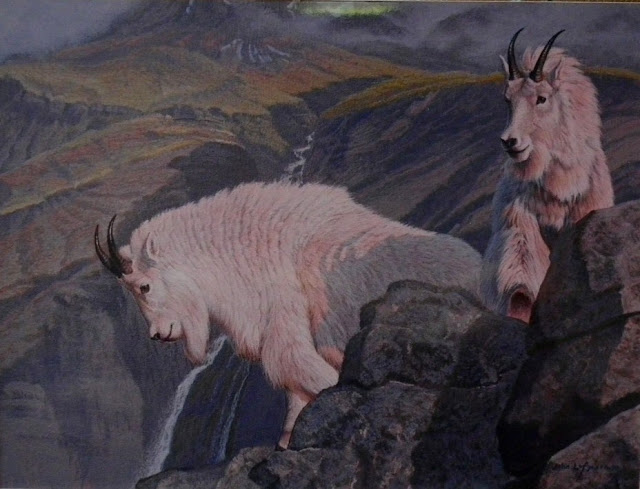 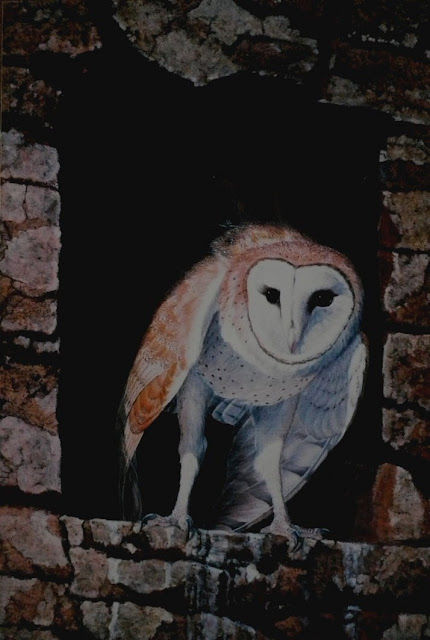 Barn Owl, 20x16". Remember that these are second or third generation photographs, so they lose a lot of the quality of the original paintings. There is a lot of delicate detail in the owl's face in the actual painting. 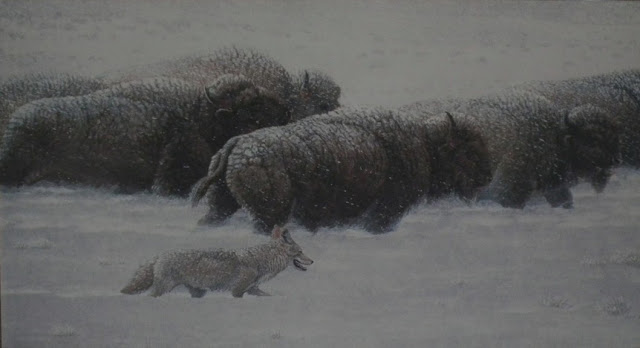 Coyote and Bison, 15x30". If you see enough of my paintings, you will see recurring themes in many of them. This is one of my all time favorite paintings. 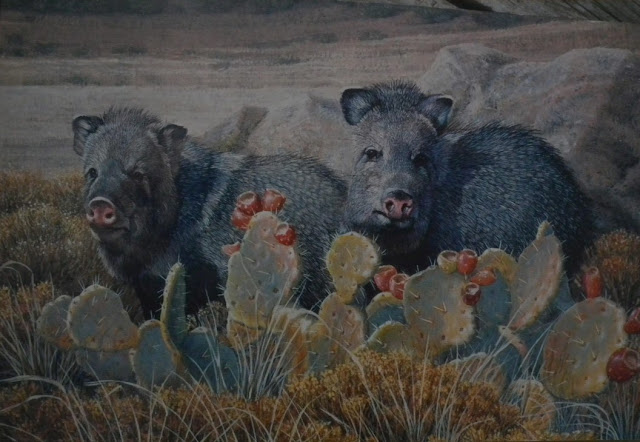 Javelina, 11x14". (Collared Peccaries). Many of the paintings in this album, were painted long before I  moved to Alaska. 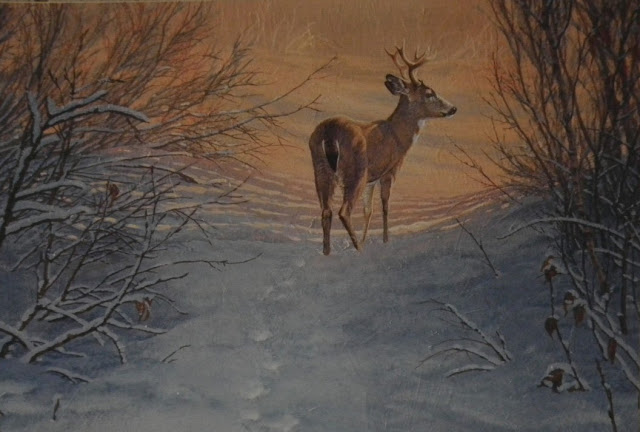 Sitka Black-tailed Deer, 18x24". They have small antlers, compared to other deer species. There is now a bank in the spot where this painting is set. 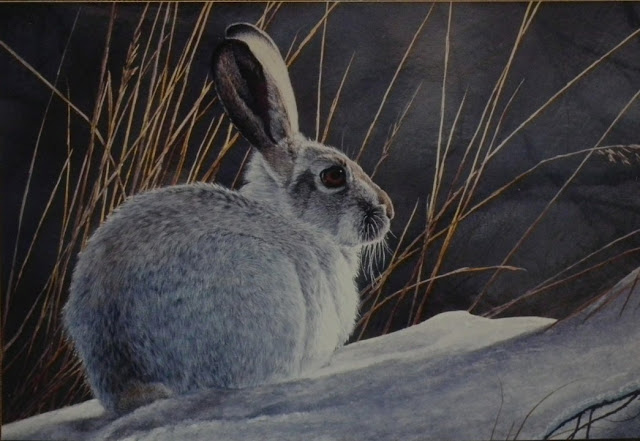 This 14x18" Snowshoe Hare marked a milestone in my painting career. It is one of the last Gouache paintings I did before I switched exclusively to acrylics. It is also one of my best Gouaches. I was painting way above my skill level when I did this one.
There are enough good paintings in that old album, that deserve to be included in another blog post. Stay tuned.
Posted by john at 5:20 PM

The photo album viewing is a mystery. I find sometimes when I am at a show and really looking at the art a comment will be made stating that "I must be an artist as artists tend to view paintings up close and personal". Maybe our general public has gotten too used to poster art replicas as the world abounds with "quality giclee posters" hence the comfort at viewing images once removed. Just a wild stab in the dark here as I prefer real art over photos.

Perhaps seeing a whole bunch of paintings is overwhelming for some people and the photo album is "do-able". Just a silly guess. On several (pre digital) occasions I have had people ask how I made the art shown on a transparency. They thought the transparancy was my art and I would explain that the transparency was like a large 35mm slide. Sometimes they would still not understand and would ask how I got the image in there! It's a treat to see all your older paintings.

Thank you for your thoughts Tess, and Shari. I believe that there is a profound lack of basic art education, or appreciation by the general public. Judging by people's comments, I believe that most people do not really comprehend what they are looking at.
I remember several conversations I have had with people where I could not get them to understand the difference between an original and a reproduction.
Over the years many people have told me that they were art collectors, but they only bought prints, never originals. They honestly believed that prints were more valuable than original paintings. I informed them that they were closer to being garbage collectors than art collectors. People do not like to hear that.

John
Thanks for sharing all your wonderful art with us, I would love to see your originals in person. I am afraid I am part of the uneducated group that you speak of who love the pictures but don't grasp or understand the detail, knowledge and work that goes into a painting to make it what it really is. It is only now that I am beginging to understand what you are talking about. Oooking at the picture of the Townsends Warbler I notice the beauty of the stones in the water and wonder how an artist can paint something so perfect and look so natural.

I have many kind people comment on my photography and wonder why I am not selling photos or why I am not published in magazines. While I have to say I think some of my pictures are good, none of them are professional quality that anyone would be willing to pay for. Since taking pictures myself I now notice things about a picture that I never noticed before, like clarity, light, tone, background and position of the subject in the photo and realize I have a lot to learn. Following your blog has taught me a lot. I really appreciate your blog posts, your art and your photography and the comments you leave on my blog. You are an inspiration to me.
Thanks
Steve

Steve, Thank you for your compliments. Let me say that I really like the photos in your last post. I can imagine myself walking up to that Bison just like the fool in your photo.
I know, as you do, how hard it is to get photos published. I lack both the knowledge of photographic techniques, and mostly the professional lenses and camera.
An experience I had with another artist, photographing wildlife in Danali National Park. We were amoung the world's best photography pros. He commented that once they got their shot, their work was done, while ours was just beginning. We had to translate our photos into creative compositions.

Once again at the risk of repeating myself, another batch of wonderful paintings John. My favorite this time - the Barn Owl, another bird I have a special love for. Even did a painting like your many years ago.