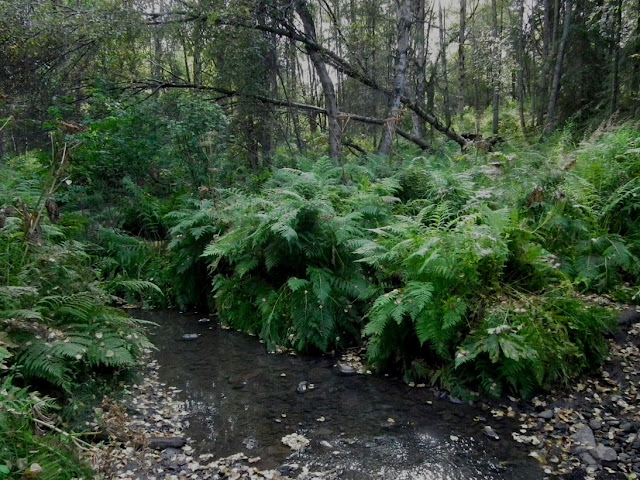 Someone reported seeing a Buff-breasted Sandpiper on the mudflats off south Anchorage. I live on he edge of town in north Anchorage, ten or fifteen miles away. Since there are mudflats so much closer, I seldom ever go to south Anchorage.
About ten years ago I went to a natural area called John's Park in south Anchorage. I thought I remembered it being located on a bluff overlooking the coastal mudflats. I thought that maybe I could access the mudflats from there. Since I have not seen a Buff-breasted Sandpiper, I took a day to look for it on Thursday.
The photo above is John's Park. It was pretty quiet. Only a Red Squirrel, chickadees, Red-breasted Nuthatches, and a single Magpie.

While I was at John's Park, I asked a few people about getting down to the mudflats. They told me that the best way to get down there was from a spot about two miles away. I walked along the trail, then Shore Drive until I reached the place in the photo above. It overlooks Turnagain Arm of Cook Inlet. The mountains in the photo are on the Kenai Peninsula. 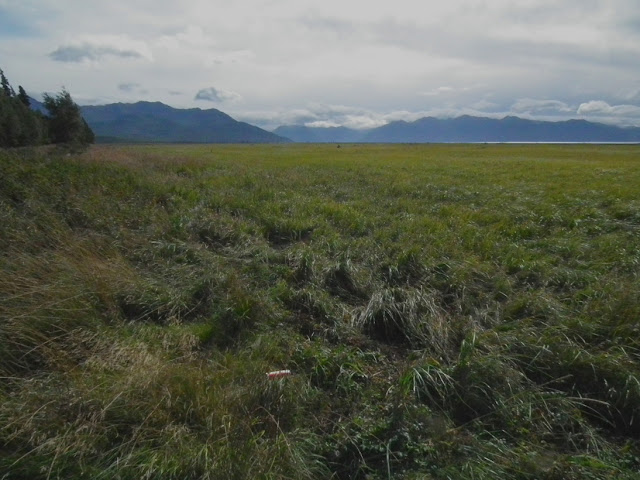 I worked my way down onto the grassy area between the bluff and the mudflats. It looks like solid ground, but my feet immediately sank into six inches of wet ooze. It smelled just like raw sewage. It took a lot of effort to trudge through the muck. After making it only about halfway across the grass, I gave up and turned back. There were no birds whatsoever, and the wind was howling, (typical of south Anchorage, look at the trees in the photo). A waste of a day, but some pretty scenery. 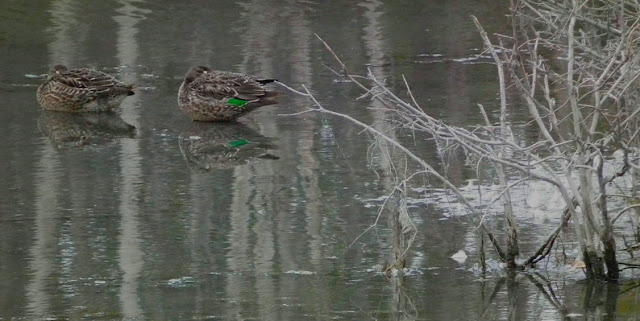 Today I decided to look for the Common Black-headed Gull for the third time, so I went to my usual area along the Coastal trail. No luck because the gulls were way out on the mudflats, and I dont have a spotting scope.
I did see the weasel again though I could not manage any photos. The photo above is a pair of sleeping greenwings in their usual slough next to Westchester Lagoon. 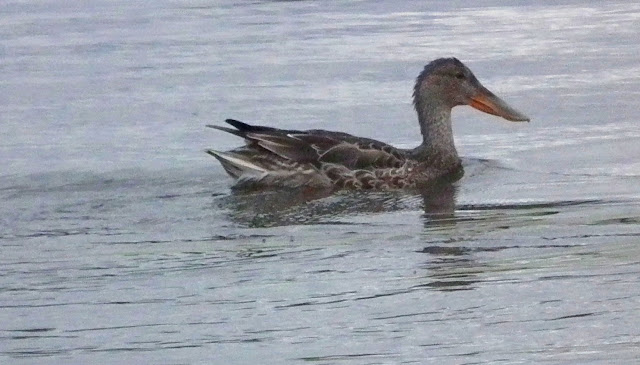 A female, or juvenile Shoveler on Westchester. 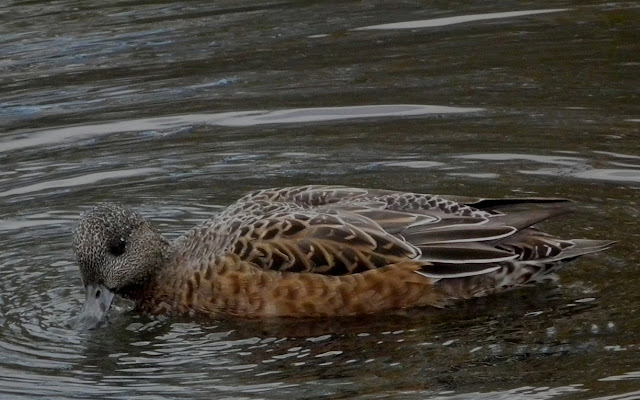 At this time of year, ducks are hard to sex because males are moulting, and look like females, the young have reached full size and also look like females. So this is either a juvenile, or female American Widgeon. In a short time, males will reach their prime colors. 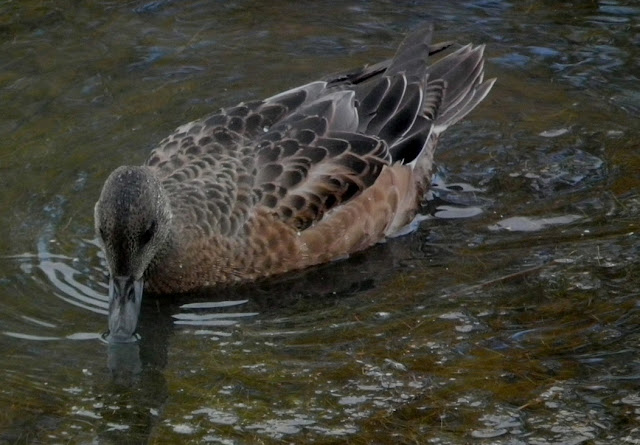 Whichever sex it is, I really love it's warm tones. 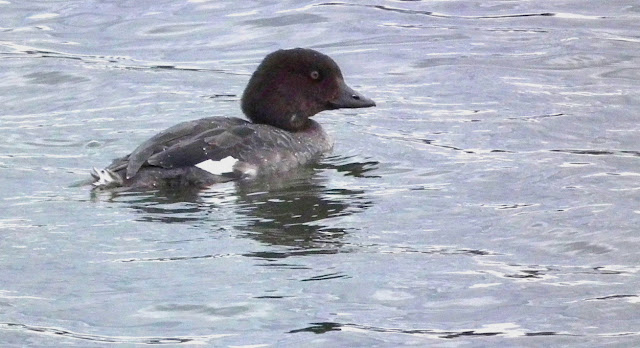 Another challenging identification is determining the difference between juvenile Common, and Barrow's Goldeneyes. The head shape is supposed to be the key. Barrow's Goldeneyes have a steeper slope to their forehead, and fuller nape. It may be obvious in adult males, but juvenile ducks are far more similar to one another. 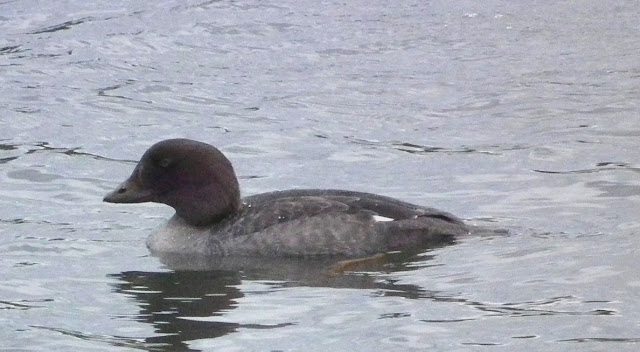 The previous duck looks more like a Barrow's Goldeneye to me, while this one looks more like a Common Goldeneye. They were right next to one another. I am not at all confident as to their exact species. Any thoughts on the subject?
Anyway I saw the usual Mallards and Canada Geese. The Bald Eagle was not in it's tree. It was out on the mudflats. Only two Greater Yellowlegs, no dowitchers or cranes. Things are starting to quiet down around here. If you go to the Coastal Trail during the winter, you usually see absolutely no wildlife at all. 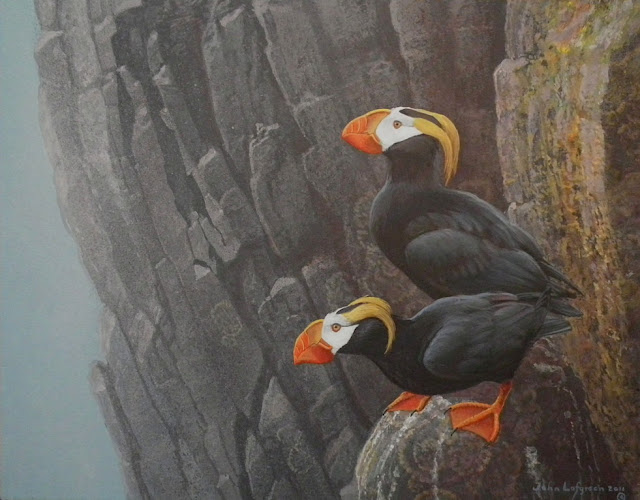 This is the latest painting, More Tufted Puffins, 11x14". It is unusual for me to be in the mood to paint puffins. I have a hard time coming up with an interesting way to portray them. The rocks are a lot funner to paint than the birds themselves. 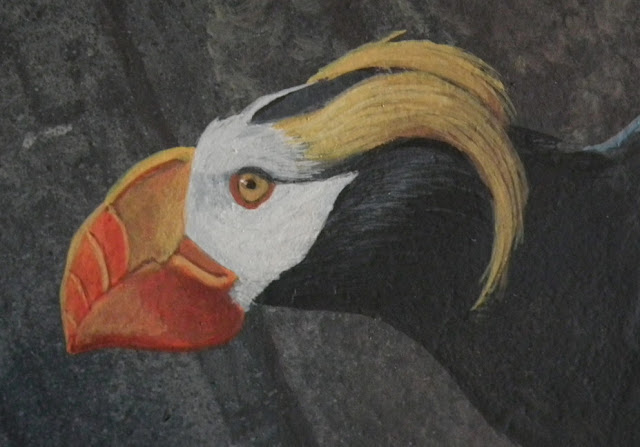 I should have done the painting with more delicate detail work. I just did'nt have the patience.
Posted by john at 12:19 AM

Beautiful Puffins, I have only seen Puffins once in my life but they don't count on my life list because they were at the Seattle Aquarium.

Adding some alcids to my lifelist was a strong incentive that helped me decide to move to Alaska. I have been able to see both species of puffin, Rhinocerous, and Parakeet Auklets, Pigeon Guillemots, Kittlit'z and Marbled Murrelets, Common and Thick-billed Murres, and lots of other seabirds. It is very expensive to get to the places where I can see the remaining species.