My Most Famous Paintings

Some years ago, while I was still living in Lakeside, Arizona, a local t-shirt company hired me to design some of their t-shirts. They had an idea to market t-shirts to fire departments all over the country. Thay asked me to paint a fireman with an axe, facing a fire-breathing dragon inside a burning building. Around the design was a border that said, International Brotherhood of Dragonslayers.
They showed me a design that some other artist had done of the same thing in a fire-fighting magazine. I knew that I was walking a fine line with plagiarism, so I changed my version considerably. When the t-shirt people saw it, they told me to make it look more like the magazine ad.
I told them that we would get sued if we did that. They had me do it anyway. Sure enough, the t-shirt company got a cease and desist letter from a law office as soon as they tried to market the t-shirt.
They consulted an attorney of their own, and instructed me to go back to my original design. They agreed to pay me fifty cents per shirt sold. They could not keep up with the demand for their shirts, and I thought I was set for life.
After a few months they saw that they were working day and night to keep up, while I was pocketing thousands of dollars without lifting a finger. So they changed the deal, and dropped my cut in half. I really did'nt complain too bitterly. Over a period of several years, I made a lot of money from a design that I spent two days working on. Eventually the market became saturated, and sales dropped way off. We changed designs, and marketing strategies, but the good times were over. 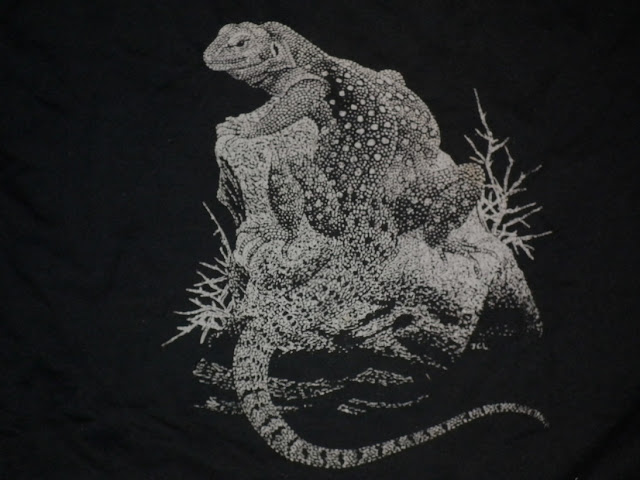 Unfortunately, I never even kept a copy of that t-shirt. The Desert Iguana above is another design I did. It was never marketed. I just made it for my own pleasure. It was done like a photographic negative by making black dots on a piece of vellum paper. That was burned onto a silk screen. Then white ink was spread over the silk screen on top of a black t-shirt. It has only lasted this long because I never wear it. 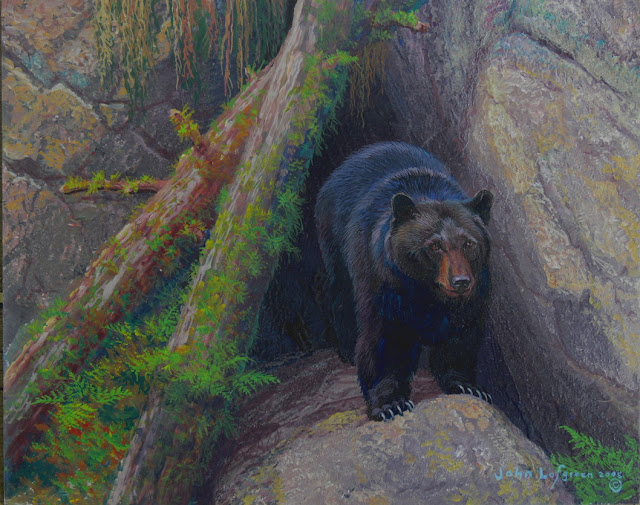 The years passed by and I moved to Alaska. Nevertheless, I had learned the lession. The real money in art comes from mass media, not individual sales of original art. I tried my hand at limited edition prints. Unfortunately, I came too late to that game.
There are so many artists making prints, that there are more available art prints, than there are walls to hang them on. Nobody wants them anymore, so I quit trying to make them. I did do designs for collector plates for The Hamilton Collection. That paid for my first trip to Costa Rica.
The painting above is a small 8x10" Black Bear called, The Cave Bear. I sent it to a publishing company called Wildwings, in Minnesota. They put it in their Fall Festival Art Show, but it did'nt sell. They made a copy of it and sent it back to me.
Next I sent it to Gary's gallery in Homer and sold it for $400.oo. Decent money for one small painting. In the meantime, Wildwings licensed the image to other companies, and they also put it on designer tins for their own catalog. In the intervening years I have made some decent money from that painting, and royalty checks keep on coming.
It is life-saving income during hard times like these when nothing else is happening career-wise. I have had a number of images reproduced in many ways. I have seen my own artwork displayed far and wide, on many different products. It always gives me a momentary thrill. Sometimes the lamest looking design, makes the most money. There is no rhyme or reason to it that I can see. 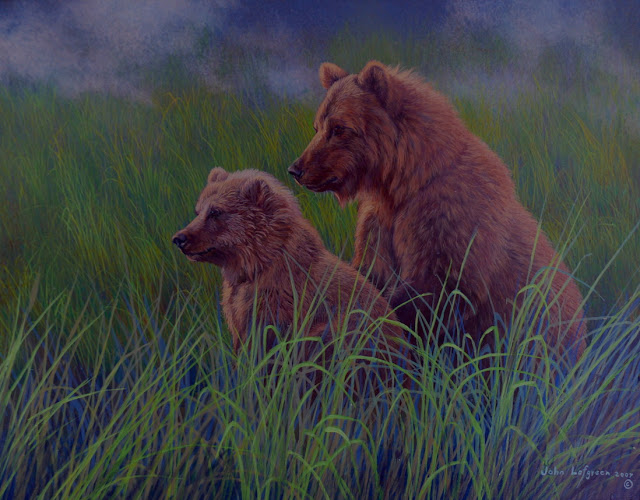 This is another painting, that I sold in Gary's gallery. It was used by a nationally famous company on their calendar. That company shall remain nameless because they stiffed me on the payment. My complaints fell on deaf ears. So it goes. 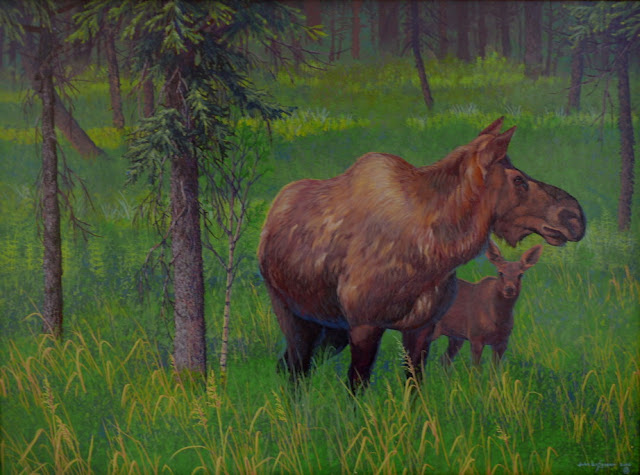 This painting, Mother's Day, 18x24" was used in another calendar. I did get paid for this, and another painting in the same calendar. It was also used on a Canadian Provincial Conservation Stamp. The original painting still has not sold, but at least I made some money from it. 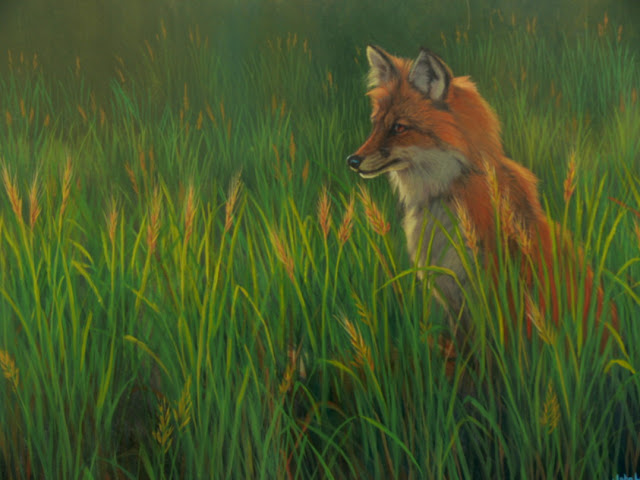 This 12x16" Red Fox painting was also used as a Canadian Conservation Stamp. The original was purchased by Jared Something or other, the host of Animal Planet. Other celebrities and vip types have also bought my paintings. Not too modest, am I? 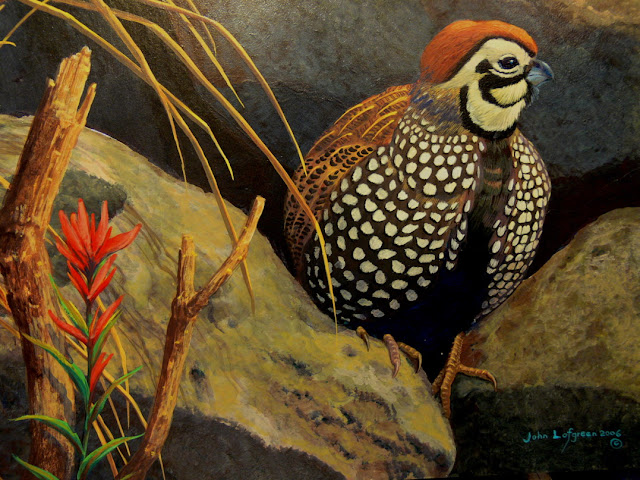 I used this painting of a Montezuma's Quail to trade for lodging in the famous ecolodge, Tandayapa, owned by Tropical Birding in Ecuador. It was used as cover art for their annual catalog. 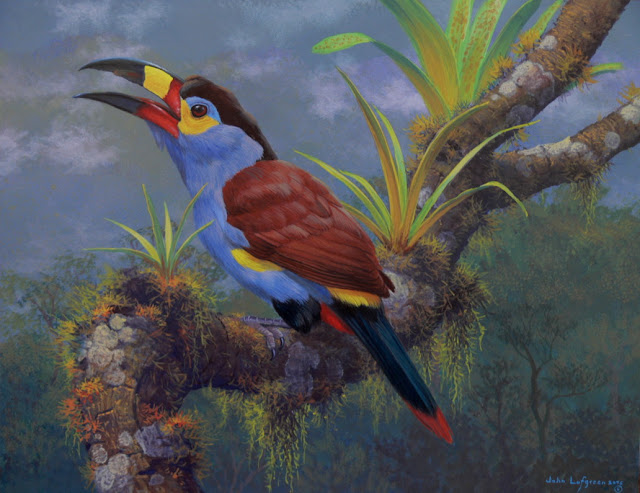 I traded this Plate-billed Mountain Toucan for a stay at another Ecuadorian ecolodge, Las Gralarias. 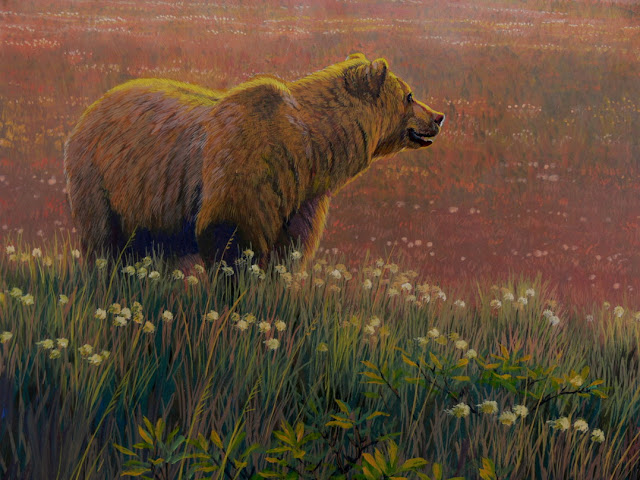 This painting was also used as a Canadian Conservation Stamp. 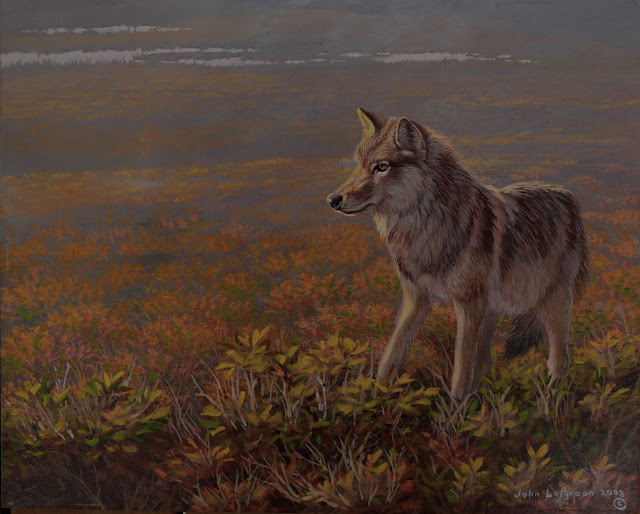 Same with this one. Another painting that has yet to sell. 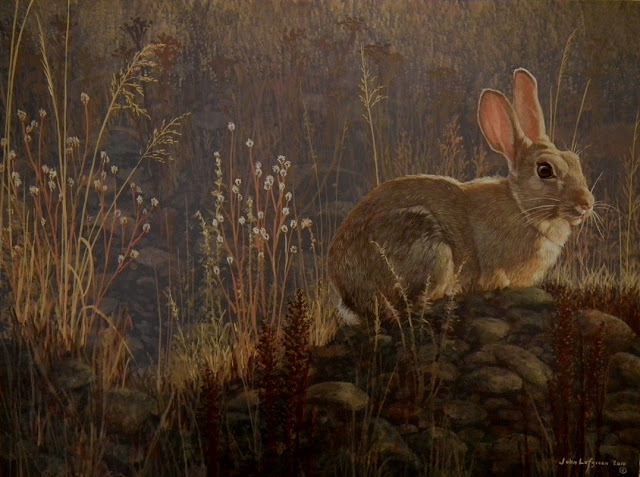 The main reason for this post is to talk about this painting, Pink Ears, 12x16". I painted it last November, and have not shown it anywhere. I did enter a photo of it into the annual, Artists For Conservation contest and show. AFC is the premier nature artist organization that limits it's worldwide membership to 500 artists.
All the big names in wildlife, and outdoor art are part of it. Somehow I got accepted as well. This painting was chosen to be part of the show, and to appear in their annual book.
I'm about to ship the painting to Grouse Mountain Resort in Vancouver B.C. That is where the show will be held this year. Next it will go to the wonderful, Arizona Sonora Desert Museum near Tucson. I have been there many times. A GREAT place. From there I forget where the show goes, but it will travel for about a year. Good exposure.
I have also had my work make it into the finals of the Fedreal Duck Stamp contest, and the Arts for the Parks contests. Both of them had travelling shows that were very good for an artist's publicity.
So I'm bragging about myself now to give me some encouragement when the art market appears to be dead in the water around here.
Posted by john at 11:53 PM

Very interesting post John, thanks fo sharing. I had no doubt your work was famous...getting royalty payments to top it off. Congrats on getting in with AFC and all your other contests! I love your work and enjoy it when you change the look of your blog. That wolverine is superb btw!
I sometimes wish I had less commissions as it would give me more time to work on wildlife paitnings I so enjoy but am enjoying the decent money it brings in so can't complain.

Colette, Thank you for your kind comments. You know that I am very envious of your many commissions. I seldom get any.
I did get a contract in the mail today for a patriotic poster. The contract states that it's for worldwide distribution, but I'm sure it's limited to the USA. The good thing is that the contract is for a painting I did years ago, so I dont have to do any more work on it. and that same company has used that painting before.
It will ensure future royalty checks. They will be greatly appreciated.

I enjoyed learning all this about you....but of course
and to think I just like your work because I do...
There is so much more in your work
dare I say...feelings
Love the toucan...wow what colors
I used to have a toucan...he was fabulous....
Glad you are successful
love pink ears too

Thank you for your comments Suz,
What kind of toucan did you have? Many years ago I had a pair of Emerald Toucanets. Great birds, incredibly messy.

John I love all your paintings, I especially like the Wolverine and the Desert Iguana. I agree with Suz, there is a lot of feeling in your work.
Thanks for sharing
Steve