Getting Arrested in Bwindi

Luckily, I did'nt get arrested, it was those miserable desperados Gary and Tom that got arrested. We spent a night at Ruhuja Headquarters in a nice safari tent camp that had excellent food at a very reasonable price. The next morning we left Ruhuja and started down the road. Immediately we came to a nice patch of forest where some villagers were chopping wood beside the road.
We assumed that we must be out of the park boundaries and stopped to look for birds. There was a steep trail leading downhill and Tom and Gary started following it. My heart does'nt do steep hills very well so I decided to stay where I could keep an eye on the car. I walked back and forth along the road seeing mostly Cinnamon-breasted Bee-eaters.
A half hour later Gary and Tom returned being accompanied by several angry park rangers. They explained that they were being arrested for walking down the main gorilla trail without a guide or a permit. We returned to Ruhuja Headquarters and I waited in the car while Gary and Tom pleaded their case.

Twenty minutes later they got in the car accompanied by an armed park ranger named Samson. He explained that we were being ordered to go to the main entrance, Buhoma Headquarters across the park. It was an uncomfortable drive at first until we saw some monkeys and birds in trees beside the road. We stopped to look at them and asked Samson if we could get out for a better look. He hesitated for a moment then nodded his consent. After several times of stopping to bird we all relaxed and Samson proved to be an excellent bird guide. 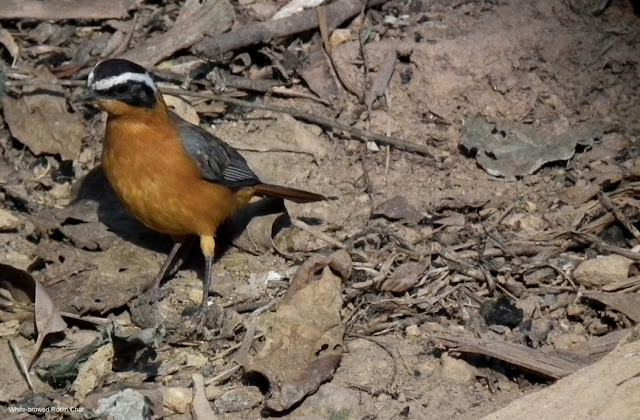 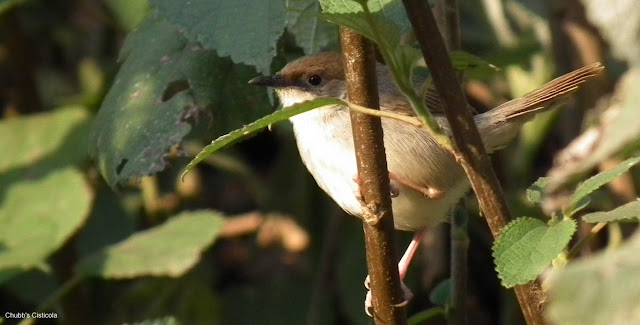 Cisticolas are a group of very non-descript, nearly identical birds that often can't be identified. With some expert help we determined that this is a Chubb's Cisticola. 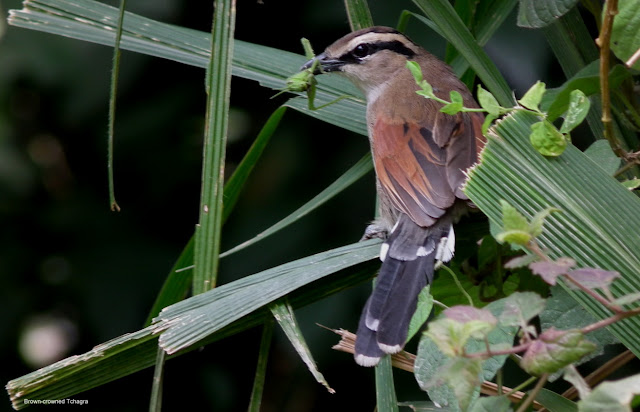 Brown-crowned Tchagras are related to shrikes. This bird enjoys a grasshopper for breakfast. 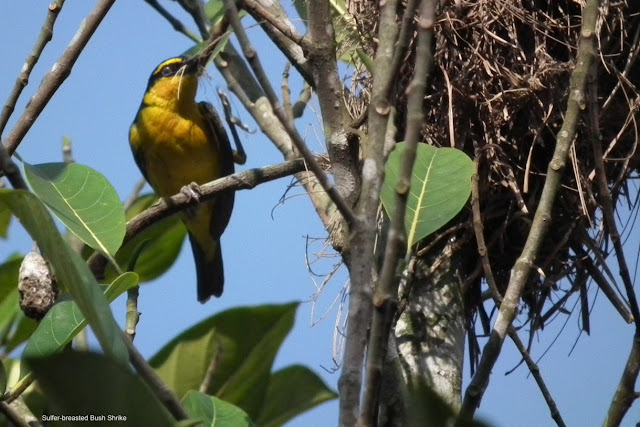 Another example of a shrike relative, Sulpher-breasted Bush Shrike. This bird is stealing nesting material from another bird's nest. 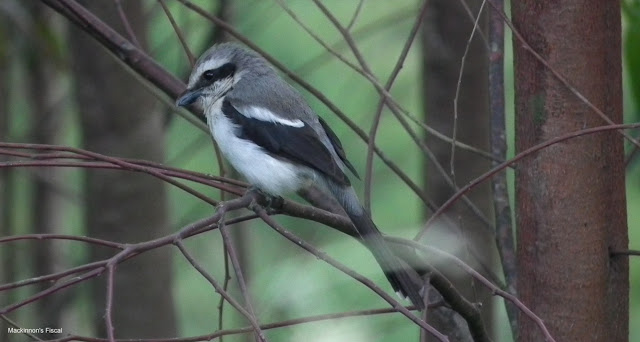 A true shrike, Mckinnon's Fiscal. Africa is the very center of shrike diversity. There are many species of shrikes and their near relatives. 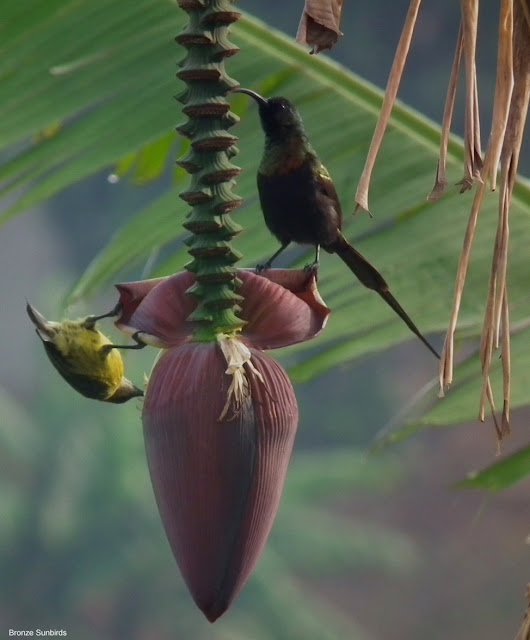 A lovely pair of Bronze Sunbirds at a banana flower. 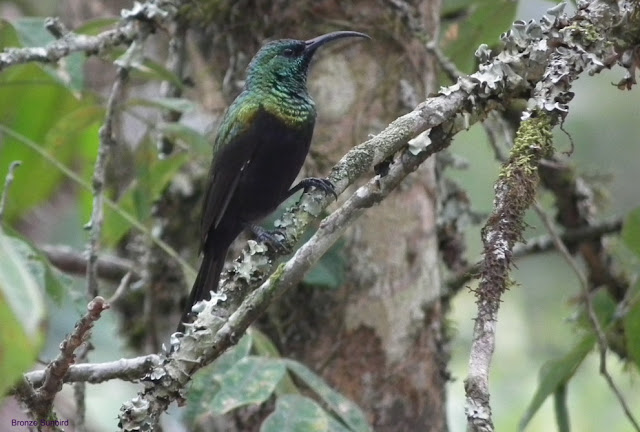 Although it is not as colorful as some, this male Bronze Sunbird holds his own in the looks department. 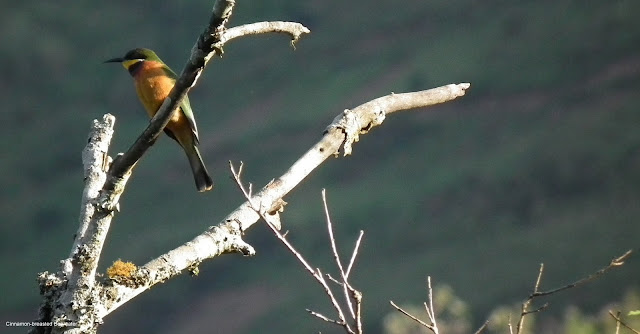 The Cinnamon-breasted Bee-eater is the common bee-eater in the mountains of Bwindi. The bee-eater that I really wanted to see most of all is a less common species found in deep forest along streamsides.
While we drove along with Samson, we came to just such a habitat and I remarked that this could be a good place to see a Black Bee-eater. 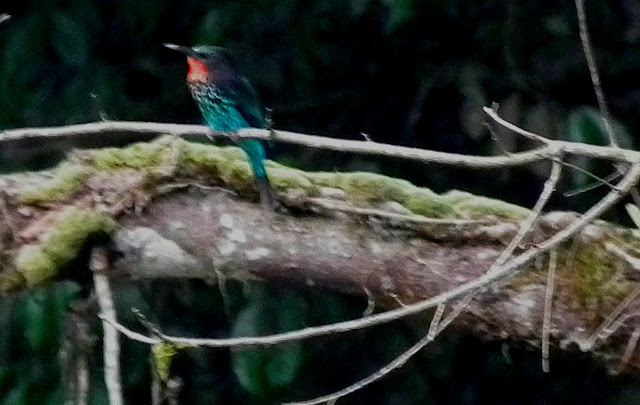 We stopped beside the beautiful stream and Samson's sharp eyes soon pointed out a Black Bee-eater. Although the photo above is terribly out of focus, it displays the bee-eater's wonderful colors. 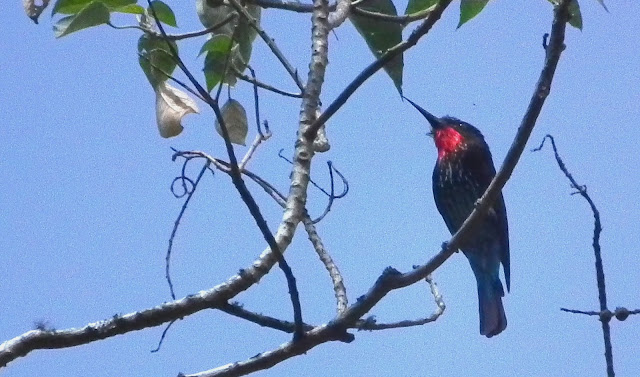 The Black Bee-eater was one of my most wanted species in Uganda. We saw several but I never could get a satisfactory photo.
We eventually made it to Buhoma Park Headquarters. We paid Samson for his help with spotting birds and teaching us about the forest ecosystem. He never mentioned our arrest to the park administrators. We gratefully left Samson and found a banda at the community owned lodge, just inside the park boundaries. 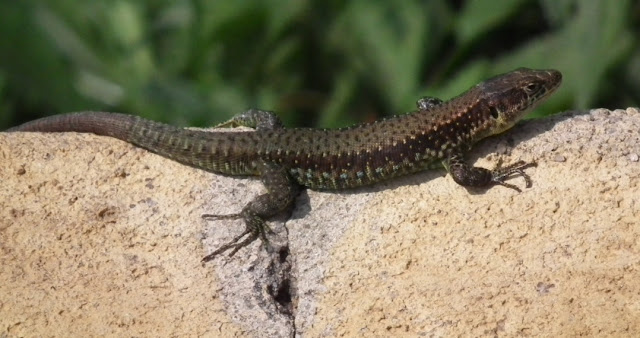 This lizard, (skink?) was at Buhoma Park Headquarters. 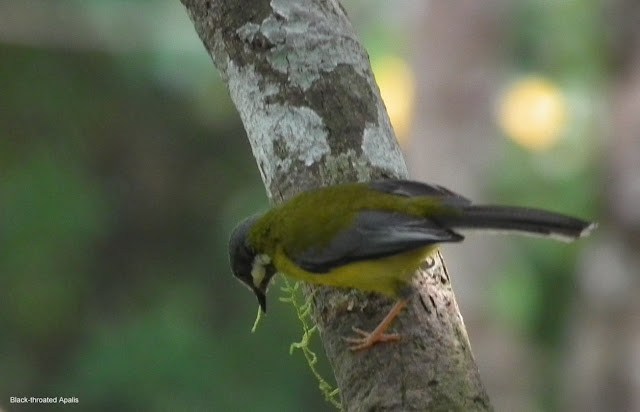 An attractive little, Black-throated Apalis gathers moss for it's nest. 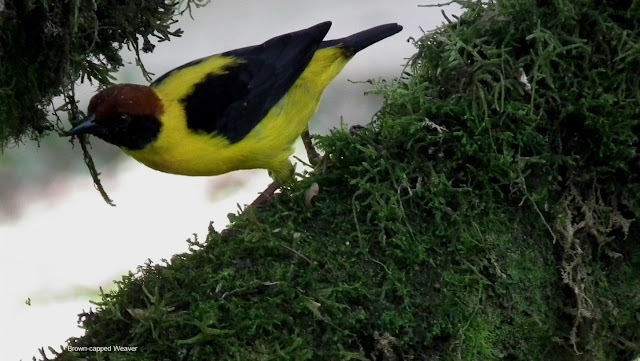 The apalis was being accompanied by another moss gathering bird, Brown-capped Weaver. These weavers are unlike most other species. They inhabit forests and are less gregarious than other weavers. Their beauty is only surpassed by the Red-headed Weaver in my opinion. 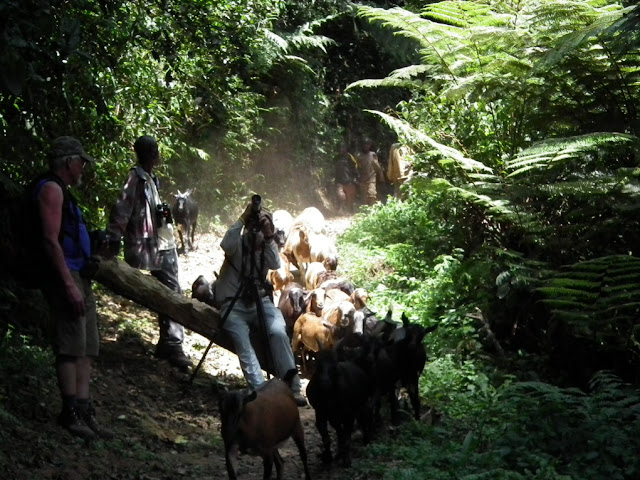 Tom ignores nearly being trampled by goats while he studies a bird inside the park. Local people dont hesitate to utilize the park all around it's boundaries. Because of the dense human population on all sides, the park is under constant exploitation.
Posted by john at 7:38 PM

Gee. John, maybe you should rethink your traveling companions for the future; you're known by the company you keep.

These are some of the best bird pix you've taken.

Maggie, I'm pretty sure that Gary and Tom are on the FBI's most wanted list. I'm just glad that my dear sainted mother did'nt live to see this day. I'm happy with these bird pix too.

found your site on del.icio.us today and really liked it.. i bookmarked it and will be back to check it out some more later