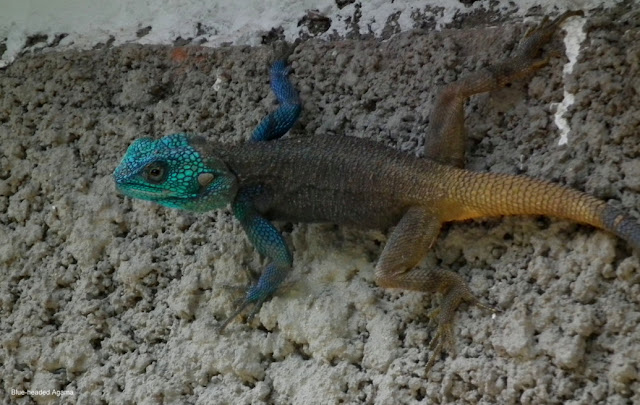 A magnificent male Blue-headed Agama on the outside wall of my room in Semliki NP.
The Semliki forest is the only lowland tropical rainforest in all of East Africa. It is an extension of the large Ituri Forest in the DRC. There are about 50 bird species there that occur nowhere else in East Africa. Five species of hornbill cannot be seen in Uganda except in semliki. There are also many primate species and other mammals that can only be seen there including Forest Elephant and Forest Buffalo.
While planning out our trip, Semliki was my number one destination. I actually wanted to skip Bwindi in order to have more time in Semliki. Gary and Tom had other ideas so I compromised. Tom did'nt really think Semliki was worth the trouble of going so far out of our way to visit.

The forest looks like any other of the forests that we visited, and like many forests, it is difficult to see anything in the thick vegetation. Tom was closer to being right about Semliki than I was. We did see three of the five hornbills. The large Black-casqued Wattled Hornbill, Piping Hornbill, and the rare White-crested Hornbill. We also got Red-tailed Ant Thrush and a few other goodies but FEW is the operative word. 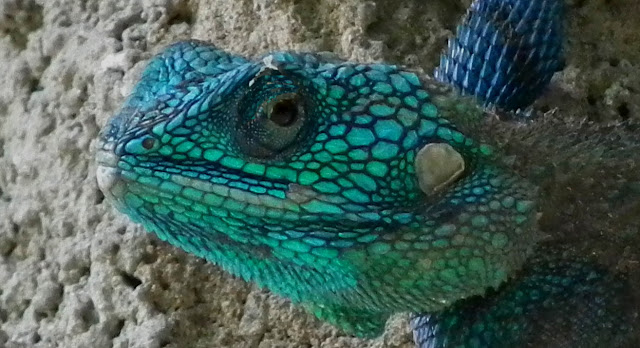 I did'nt get photos of much at all in Semliki but the agama is worth a close-up. They are large and remind me of extra colorful Bearded Dargons. 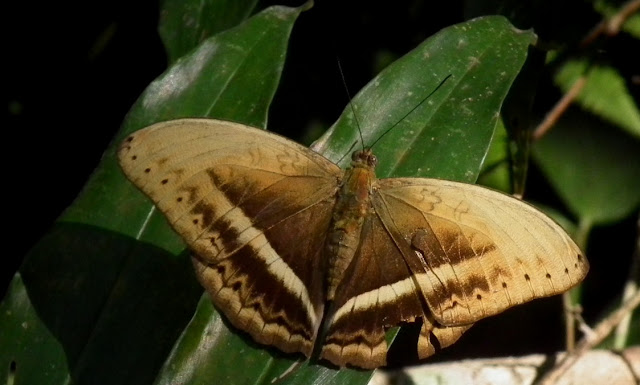 There were a few interesting butterflies in the forest. The most colorful would not sit still for a portrait. 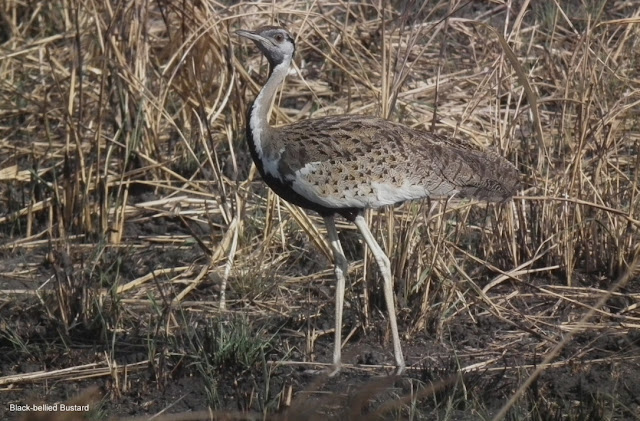 Toro-semliki Wildlife Reserve lies to the Northeast of Semliki NP. It is Uganda's oldest protected area, and it is where we saw some Black-bellied Bustards. It has plenty of wildlife but not like it used to have before Idi Amin and his stupid war with Tanzania.
If you remember your history, Idi Amin was a mega-maniacal dictator who invaded Tanzania and got invaded by Tanzania in return. The Ugandan and Tanzanian troops looted and nearly destroyed all of Uganda's protected areas back in the 1970's. They have still not fully recovered today.  The movie, The Last King of Scotland is all about Idi Amin. 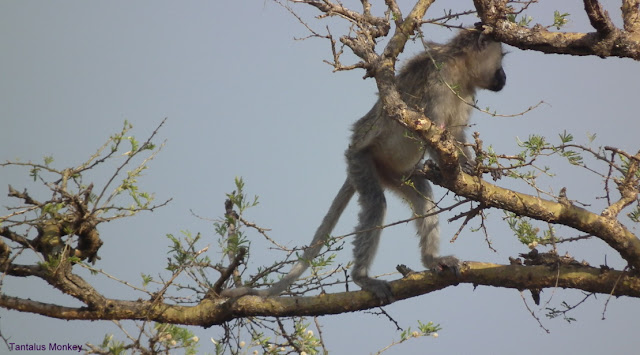 Anyway Toro-semliki is mostly savannah habitat that borders Lake Albert. We got a new primate there, Tantalus Monkey. I think this one is taking it's first evolutionary steps toward bi-pedalism. (joke). 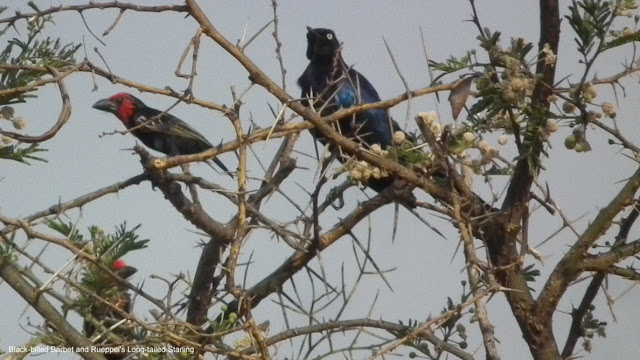 We pretty much had the whole reserve to ourselves. All of the reserve staff bent over backward to make our stay as pleasant as possible. It is another great place. Above are a Black-billed Barbet, (left) and Rueppel's Long-tailed Starling. The starling looks nearly identical to a North American Grackle. 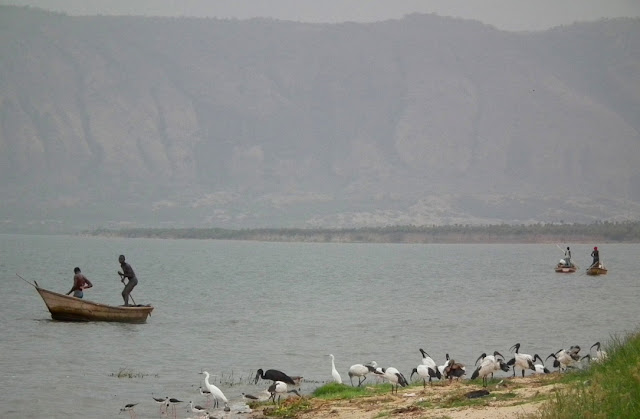 The reserve headquarters are right next to a noisy village on the shores of Lake Albert. The area is loaded with birds. The village survives on fishing and yet when we went into the village for dinner, there were no fish at all. We ate goat stew instead, (much better than fish in my opinion). 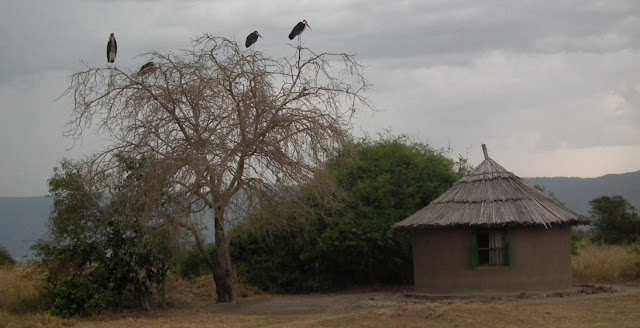 We stayed in these rustic bandas that were very inexpensive but lacked electricity or running water. The reserve staff povided us with lanterns at night but warned us to leave them well away from us after about 8:00pm. That was when the lake flies swarmed in their mighty hordes. We set a lantern on the ground outside a banda for about an hour. In the morning there was a pile of dead flies, four inches deep, in a radius of ten feet around the lantern. Possibly as much as a million dead flies. The birds in the photo are Maribou Storks. 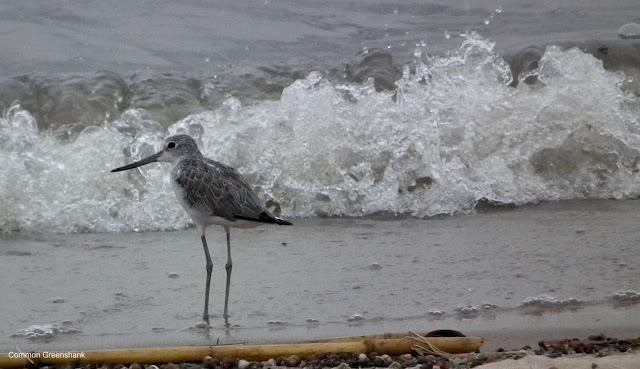 There were many wintering shorebirds at the lakeshore like this Common Greenshank. 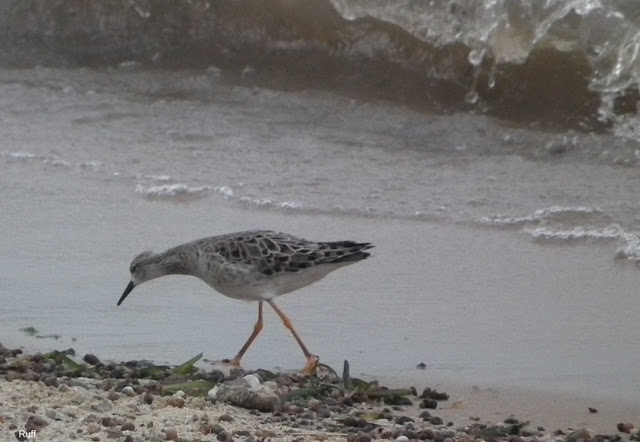 The winter plummaged Ruff looks like a different species than the breeding male. 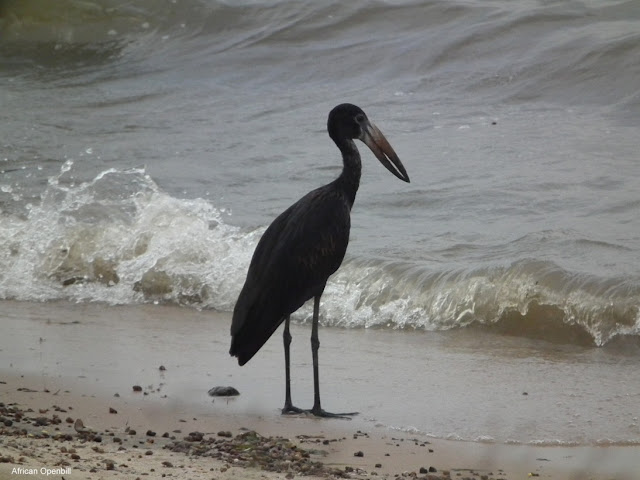 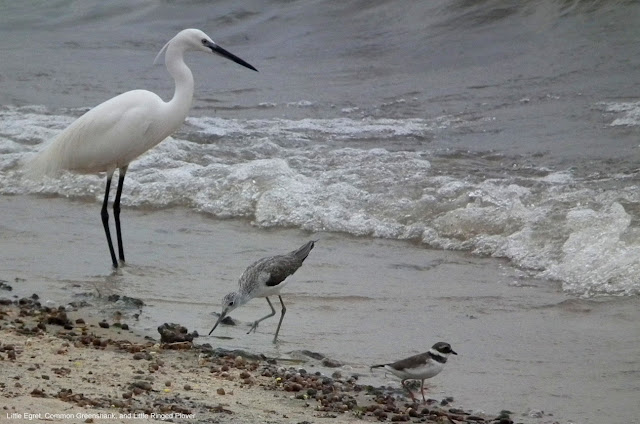 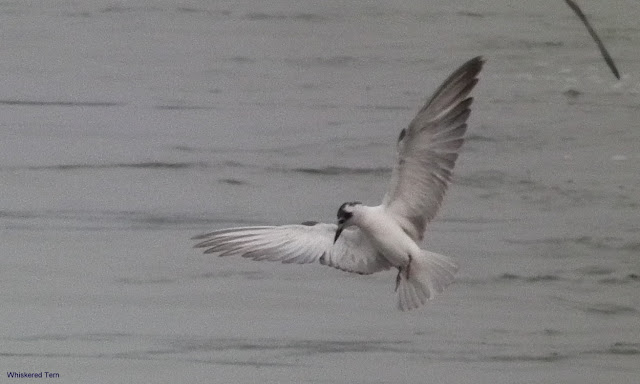 A Whiskered Tern makes a quick turn to zero in on a small fish.

Black-winged Stilts.
Stat tuned for an exciting account of our trek to find Chimpanzees in Toro-semliki.
Posted by john at 5:33 PM