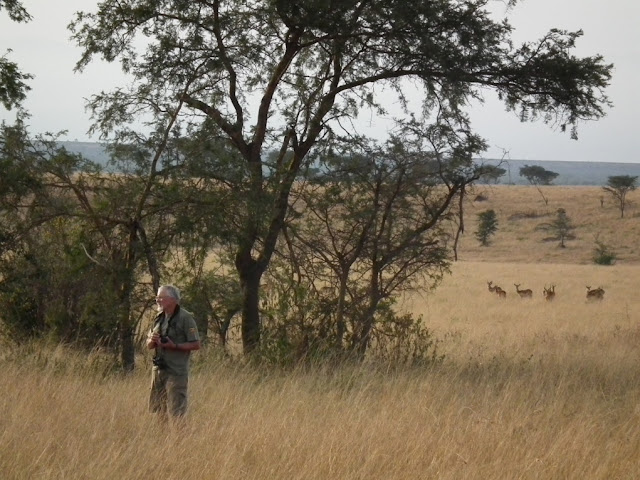 From Bwindi we turned northward to Queen Elizabeth National Park. We entered the park from the south and stopped at the Ishasha Headquarters. Gary scans the savannah in the photo above. 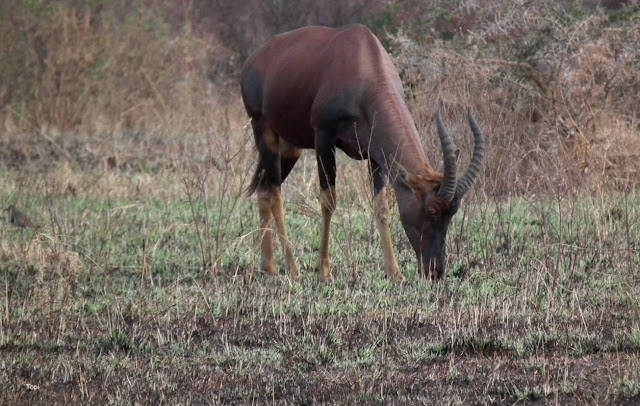 Queen Elizabeth is one of Uganda's most popular parks. It has all the big African animals except rhinos, giraffes, and Zebras. The antelope above is a Topi. Most people who visit the park are part of organized safaris and they visit the northern section only. We saw very few people in the Ishasha section. 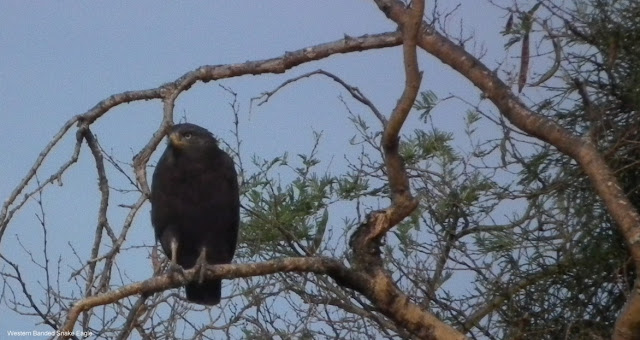 A thrilling new bird for me, Western Banded Snake Eagle. 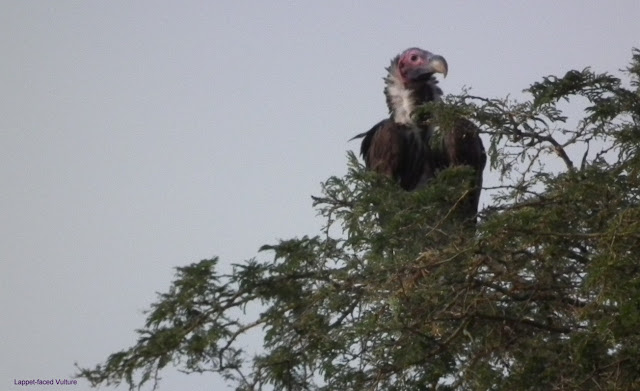 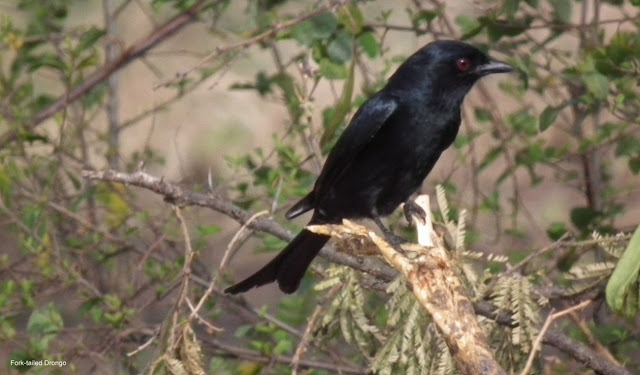 Fork-tailed Drongos were the only species of drongo that we saw on this trip. They are graceful fliers as they snatch insects out of the air. 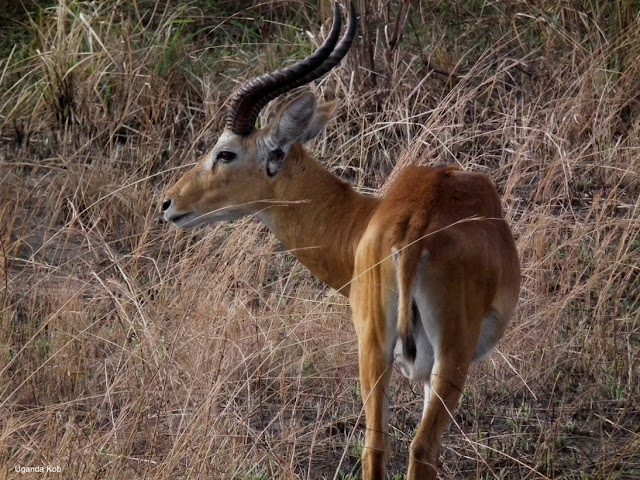 There are no Impalas in Queen Elizabeth. Instead there are the slightly stockier, Uganda Kobs. 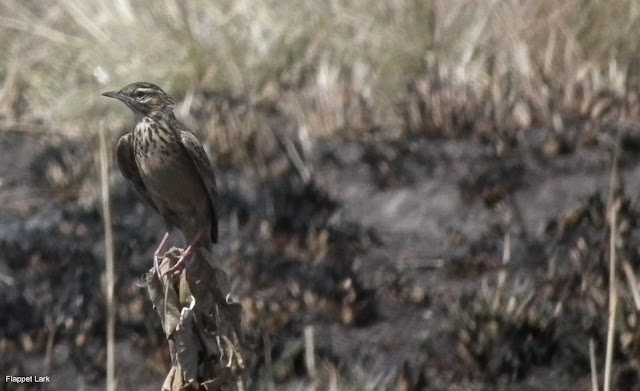 A Flappet Lark. They make a rapid clapping sound with their wings when they fly. 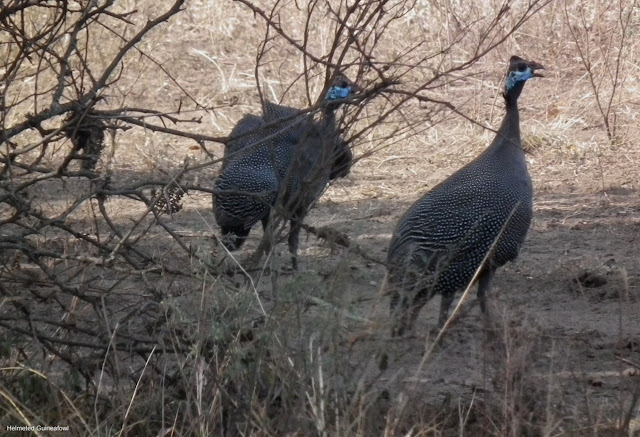 A common sight on the African savannahs, Helmeted Guineafowl. 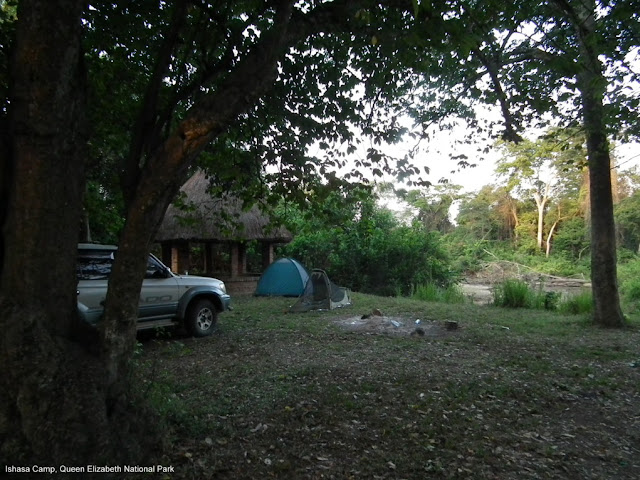 A park ranger informed us that this is the most beautiful spot in Uganda. It was closed for many years because it lies on the banks of the Ishasha River, which forms the border between Uganda and the DRC. You can see the DRC on the right where the pale tree trunks are. In past years there was constant danger from various guerilla groups and outlaws.
We had the place to ourselves except for two armed guards that protected us at night. They were sent by the park staff and slept in the open under a tree. Along with mosquitos and all the other insect pests, we had hippos and who knows what wandering the camp at night. I felt sorry for them.
Because of restrictions and fees concerning luggage limits by the airlines, Tom opted not to bring a tent. I looked at the hippos in the river at our feet at generously offered to let him use my tent while I slept in the car. That became the pattern wherever we camped. I felt so much more secure whenever I heard large animals moving about in the dark. Tom and Gary were much more alert to night sounds than I was. 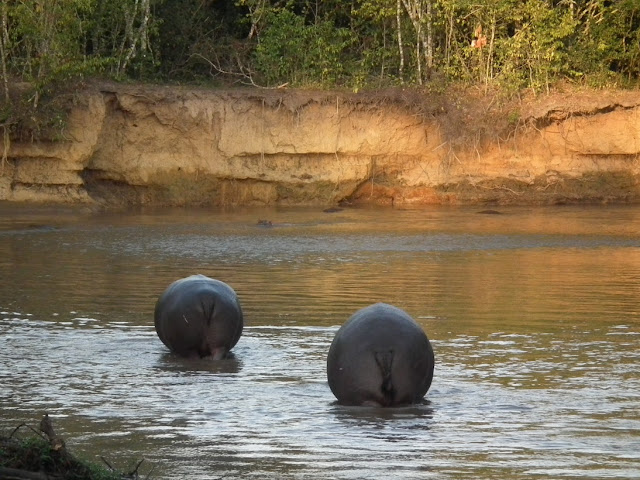 Early the next morning our nocturnal campground guests headed back into the river. 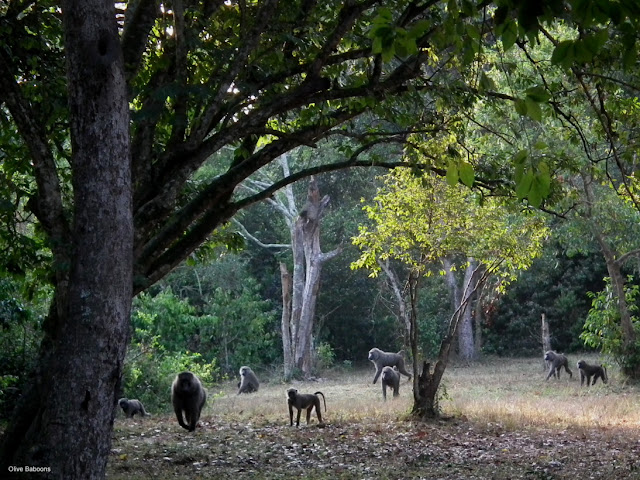 Our guards left at first light and about 30 Olive Baboons came for breakfast. They tried to raid our tents but we fended them off without much trouble. 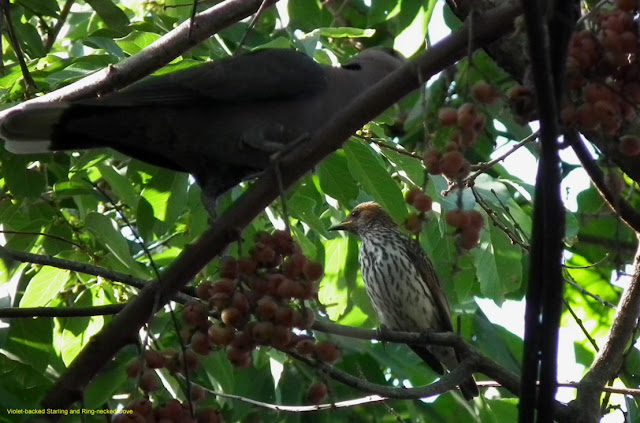 There were many birds around including this Ring-necked Dove and female Violet-backed Starling. Only the males have violet backs. 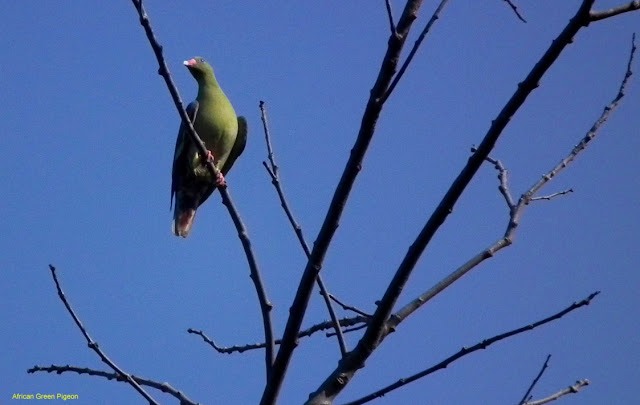 A colorful bird if seen in the right light, African Green Pigeon. There were also Red-tailed Monkeys across the river on the Congo side, and B&W Colobus Monkeys on our side. 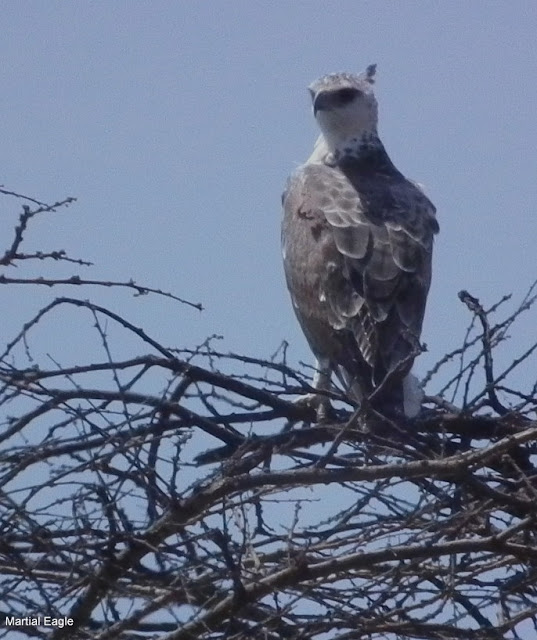 After leaving the Ishasha section of the park we headed north again. We saw some good raptors along the way like, Long-crested Eagle, Black-shouldered Kite, Common Buzzard, and this magnificent sub-adult Martial Eagle. After I put down my camera a Bataluer Eagle flew in and dive bombed the Martial Eagle. I was too slow on the draw to get any photos.
Posted by john at 7:55 PM