Krabi, (pronounced Grab-BEE), and Phang Nga, (pronounced Pung-ah), are way down on the skinny penninsula in the south. They lie on the shores of the Andaman Sea. Very Tropical. 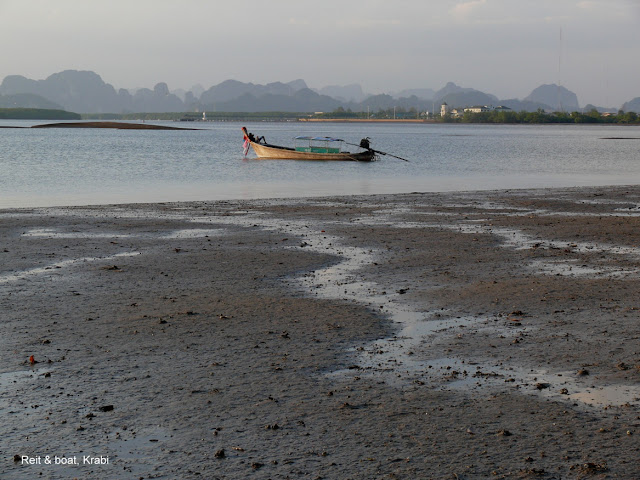 We hired a boatman for two days to take us to various birding sites like Bird Island. 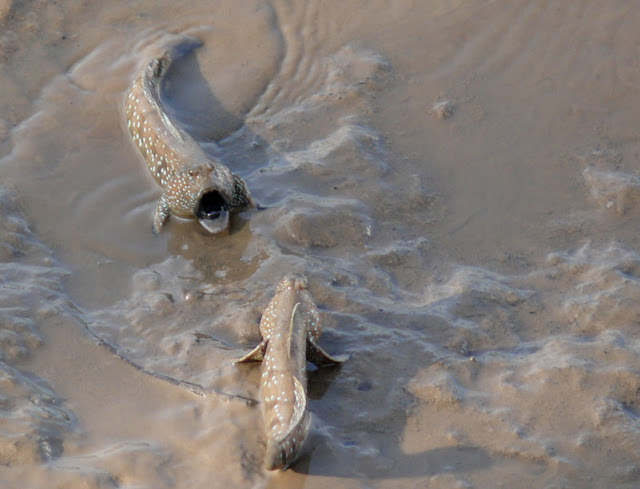 Krabi was the only place I have ever seen Mudskippers. They  are comical characters. 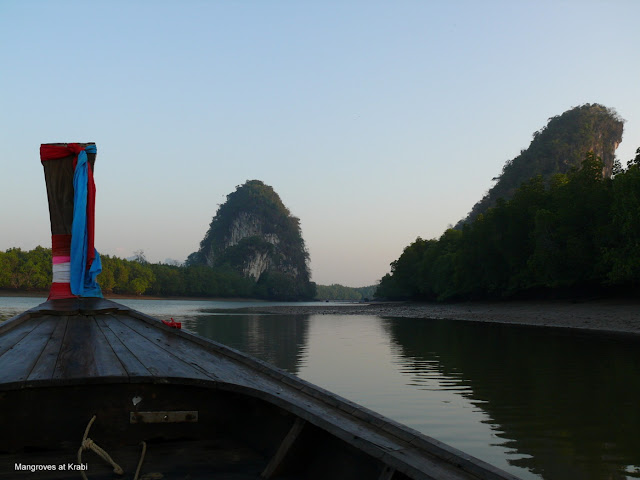 This is the view going upriver. There are Mangroves that are reknown for finding a variety of kingfishers. I wont include photos because I already did a blog post about kingfishers. 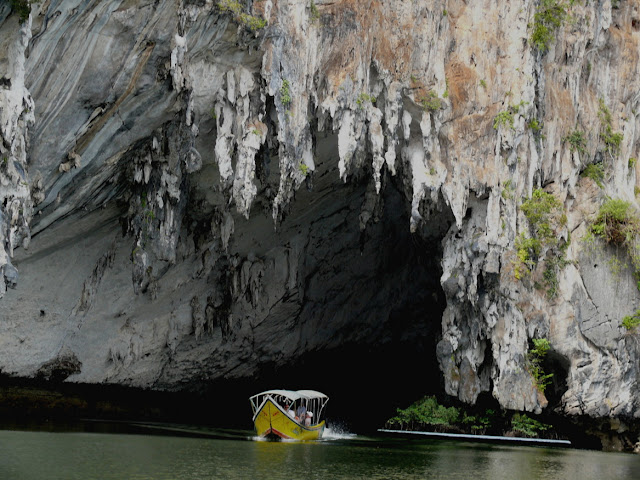 We saw many birds at Krabi, but I wont show the photos here. The photo above is a boat passing from the mangroves at Phang Nga, under a mountain, and into Phang Nga Bay. All the mountains in the area are dramatic with rock formations that look like melted candle wax. 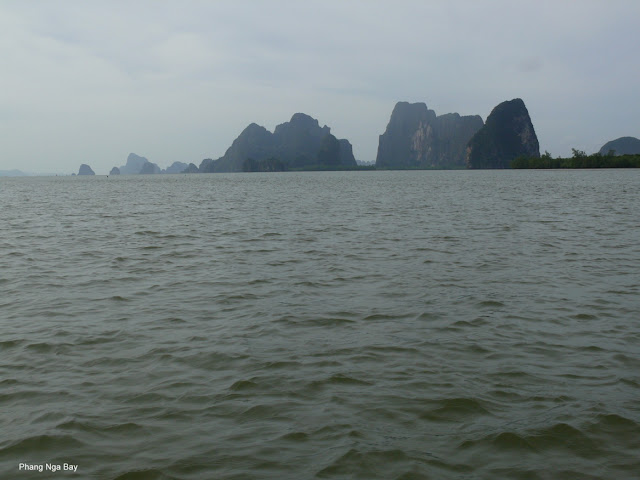 It's all very picturesque. 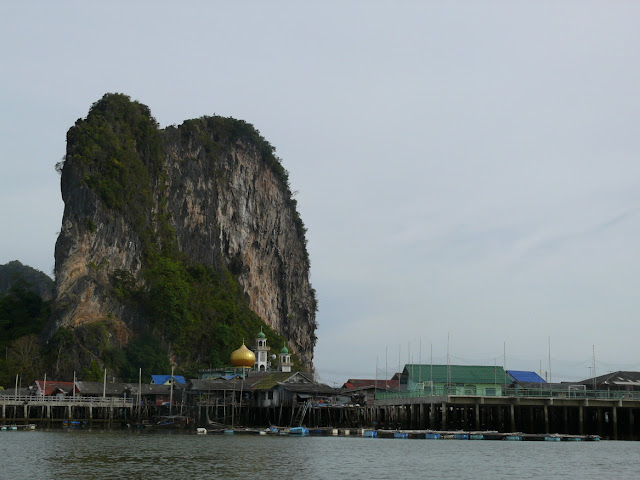 Ko Panyi, the Muslim Island, is built entirely on stilts over a mudflat. It survives on tourism, and the people there are very friendly. The golden dome belongs to the mosque. The buildling with a green roof on the right of the photo is the tiny school.
Back in the Mangroves we saw some endangered Crab-eating Macaques, below. Mangroves are one of my favorite habitats to explore. 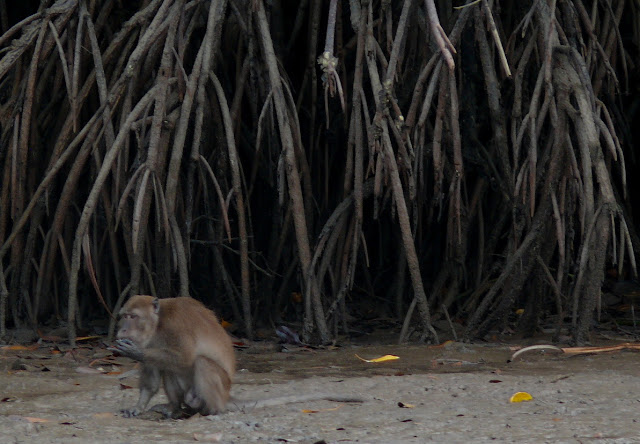 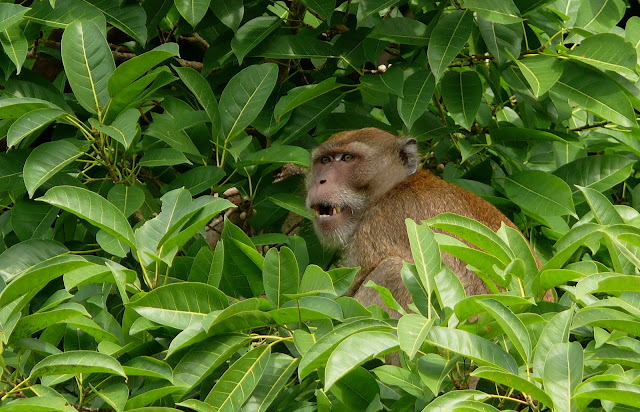 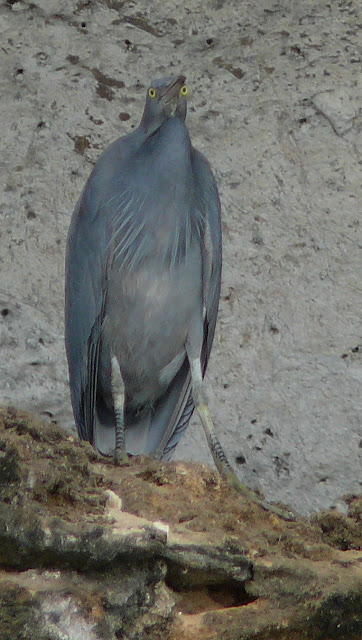 We found a pair of Pacific Reef Egrets nesting in a shallow cave over the water. 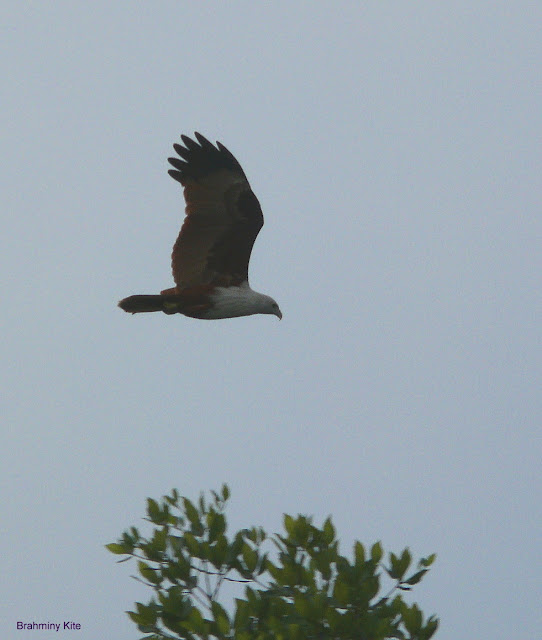 We also found many Brahminy Kites. 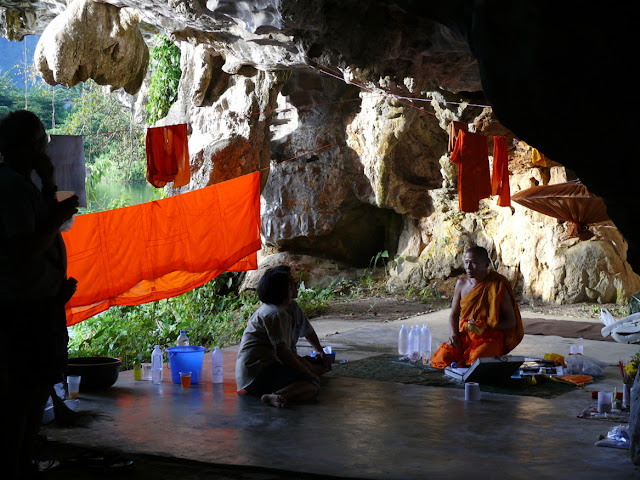 Near Phang Nga there was a Bhuddist Monk living in this cave, and dispensing sage advice to his devotees. 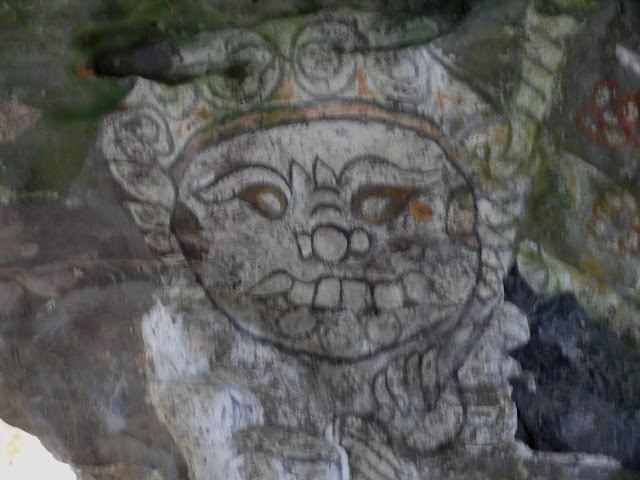 The monk was also the guardian of some ancient cave paintings that may even pre-date Bhuddism. 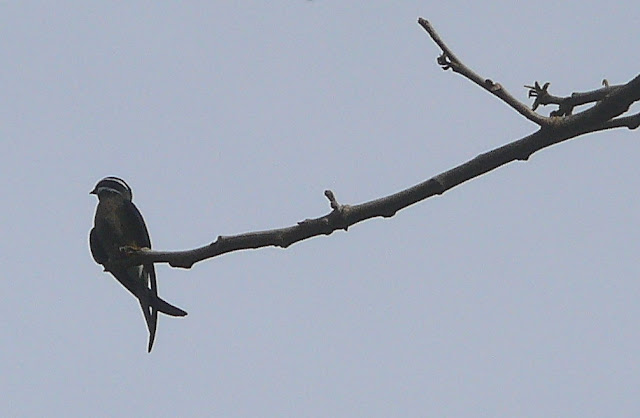 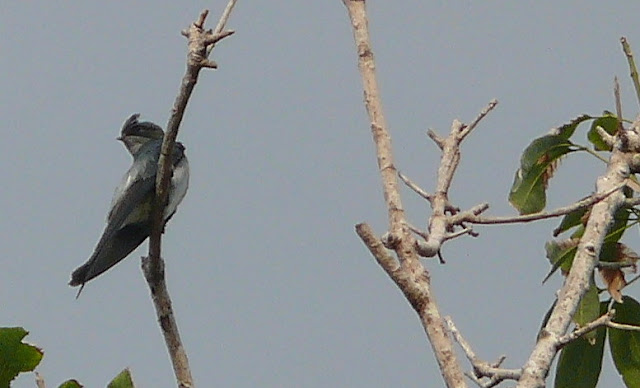 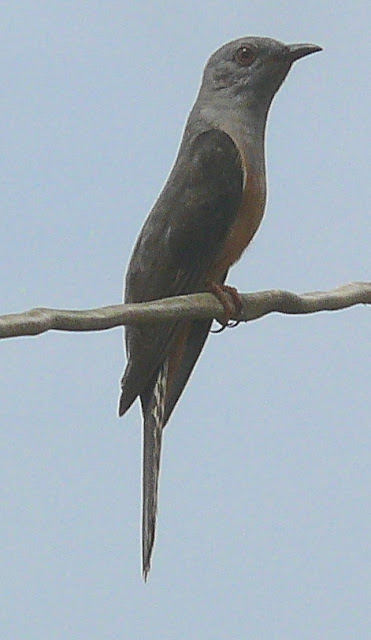 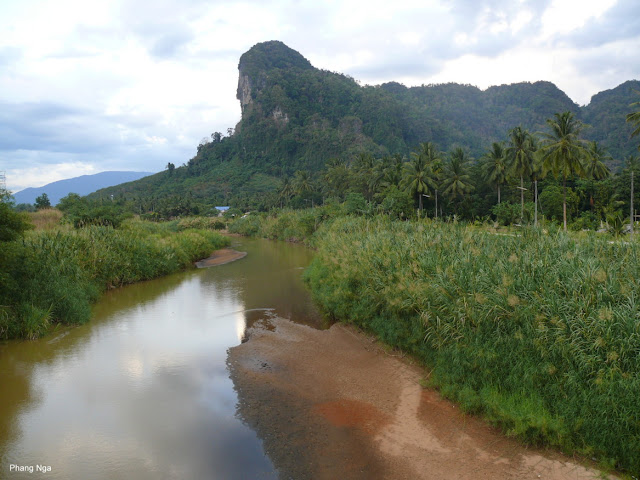 We followed this small river next to Phang Nga, and had a delicious dinner in the restaurant in the distance. Needless to say, there were many birds in the area. 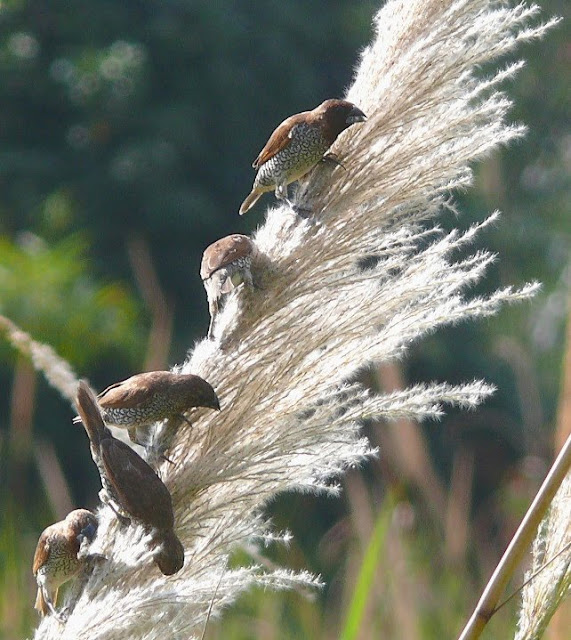 Scaly-breasted Munias are commonly seen birds in much of Thailand. In the pet trade, they are known as Spice Finches, and are commonly bred in captivity. 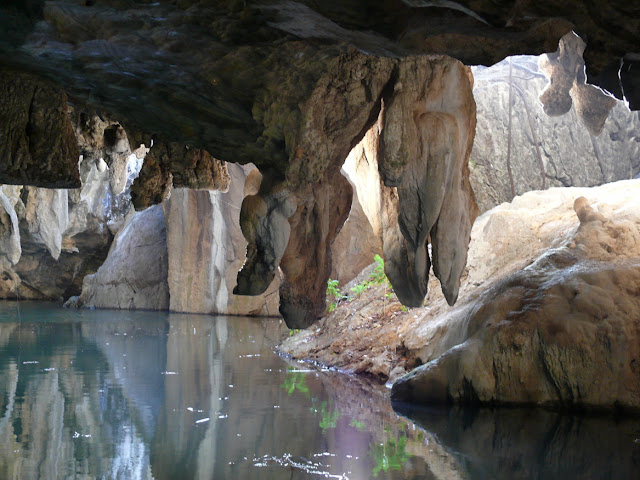 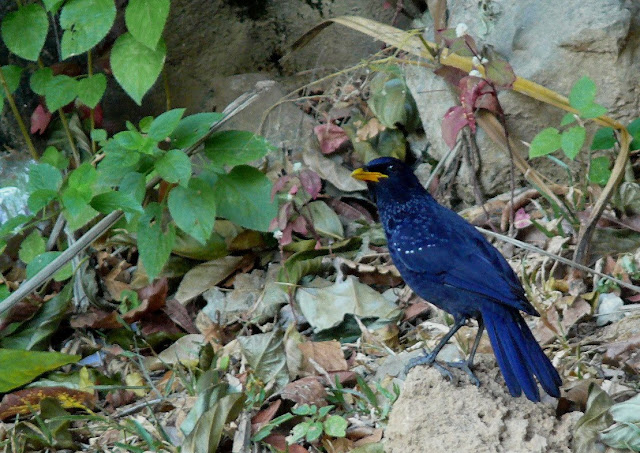 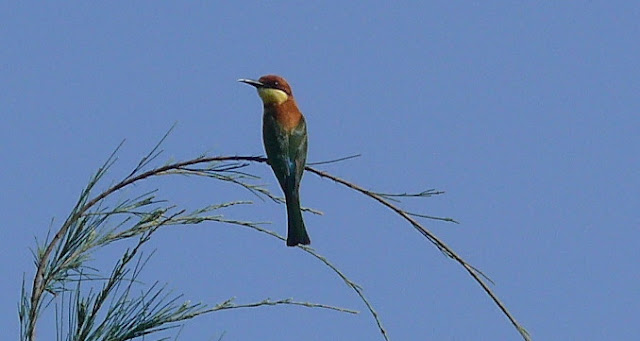 My second species of bee-eater, Chestnut-headed Bee-eater.
Posted by john at 10:38 PM